State agency says it lacks manpower to enforce more aggressively; others see a lack of will
By Dan Telvock

Diesel fumes permeate the air near the gate to the Peace Bridge Duty Free store as nearby trucks idle in traffic and parking lots.

The idling trucks are a sore spot for residents of the West Side that borders the bridge and its plaza on the American side.

Diesel fumes contribute to air pollution believed to be partly responsible for health problems – including asthma rates nearly four times higher than the national average – among residents on the city’s lower West Side, according to Dr. Jamson S. Lwebuga-Mukasa, a leading researcher of air quality in the neighborhood.

The World Health Organization said in June that diesel exhaust has been linked to lung cancer and put it in the same category as passive smoking, mustard gas and asbestos for its threats to public health.

With these concerns in mind, several elected officials and the operators of the Peace Bridge asked the state Department of Environmental Conservation this spring to begin enforcing a state law that prohibits trucks from idling for more than five minutes under normal circumstances.

It has sent enforcement officers to the bridge for two eight-hour shifts since May and issued three tickets for excessive idling. The agency inspected 81 trucks during those two enforcement actions, amounting to just over 1 percent of the trucks that park throughout the property each month.

Capt. Frank Lauricella, who leads the DEC enforcement division for Erie County, said he doesn’t have the manpower to enforce on a more regular basis the idling law and other emission rules at the Peace Bridge and the West Side.

“I have eight officers assigned to Erie County. That’s the county with the most population and the most complaints, so we are really stretched,” Lauricella said.

Countered Soto of the Clean Air Coalition: “They have the authority within the plaza to issue fines and they should be doing so instead of saying they don’t have the capacity to,” she said.

The two elected officials who asked for more aggressive enforcement didn’t fault DEC when informed by Investigative Post of the DEC’s efforts.

“According to what the DEC has provided to me, they did not find wide-scale idling,” said Sean Ryan, whose Assembly district includes the neighborhood. “They said they are still going to go there periodically to check on it.”

David Rivera, who represents the neighborhood on the Common Council, added: “That’s their job to enforce it when they are on the plaza and hopefully they will be on the plaza more often to condition people to shut their vehicles off.

“We want to make sure that if there are the resources out there, we certainly want them here.”

In early May, Public Bridge Authority Chairman Sam Hoyt and General Manager Ron Reinas contacted the DEC by phone to invite officers onto the property for more active enforcement of the idling law, said Matt Davison, the authority’s communications director.

The DEC idling law prohibits heavy-duty vehicles from idling more than five minutes unless the vehicle is stuck in traffic, idling for maintenance, powering an auxiliary function or if it is operating below 25 degrees for more than two hours. Penalties range from $500 to $18,000.

The DEC conducted an enforcement sweep on May 23, checking 17 trucks. DEC officers issued two tickets for violating the idling law, two for exceeding opacity and one for an equipment violation.

Measuring smoke opacity is a way to identify diesel engines that emit excess amounts of air pollution, but modern diesel engines are equipped with particulate filters and catalytic converters that burn cleaner than a decade ago. Newer diesel engines also burn low-sulfur fuel.

“We urge you to fully enforce these regulations in an effort to hold those who violate the law accountable, and to improve the health of residents living on the west side of Buffalo,” Ryan and Rivera wrote.

“Numerous studies over the years have confirmed that there is indeed a health crisis among those who live on the west side of Buffalo. These resident’ close proximity to the 4,000 diesel trucks that cross the border daily has greatly contributed to the poor health and sky-high asthma rates found in these neighborhoods.

“One of the biggest drivers of this long-standing problem is the occurrence of trucks idling at the Peace Bridge plaza,” they wrote.

On Aug. 1, DEC followed up with a second inspection effort. Sixty-four trucks were inspected and one was issued a ticket for violating the idling law. Two others were ticketed for exceeding opacity.

The DEC hasn’t conducted any enforcement sweeps since then.

The checks done by DEC for those particular days amounted to about 20 percent of the trucks pulled over for a secondary inspection. But prorated over a month, those inspections work out to 1.4 percent of parked trucks.

The lack of more aggressive enforcement is seen as part of a wider problem by Joseph Gardella, chairman of the city’s Environmental Management Commission. He believes a host of government agencies are displaying an indifference to the impact bridge traffic has on neighborhood residents.

“If you’re the Public Bridge Authority and you’re supposed to be accountable to the public, are you doing what you need to protect the public?” asked Gardella, professor of chemistry at University at Buffalo.

“I don’t see any real concern about protecting the public. What I see is sort of trying to whitewash the impact.”

While an average of 3,400 trucks cross the bridge in both directions daily, only about 10 percent are held over for a secondary inspection, Davison said. On the American side, they park in a large lot between inspection booths and a building that borders on Front Park.

Vehicles held up at the secondary plazas are there for numerous reasons the federal government mandates, including vehicle X-rays, background checks, identification reviews and customs and agricultural inspections. Trucks parked in this area, as well as near a Duty Free store on the American side of the bridge, are the primary targets of anti-idling enforcement efforts.

The Public Bridge Authority in late August posted 20 “no idling zone” signs for the secondary plazas and Duty Free parking lots on both the American and Canadian sides.

They also created warning cards to hand out that remind drivers of the law and the possibility of being fined. The authority has no legal power to issue tickets for violations of the state’s anti-idling law or its own no-idling rule. 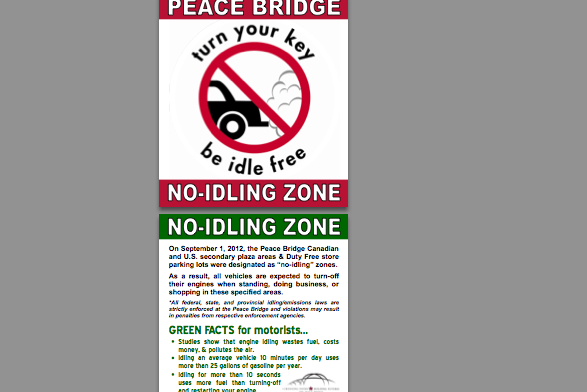 Davison said that since mid-October about 84 warning notices have been issued to both cars and trucks – mostly trucks – for idling in the no-idling zones, split evenly between the U.S. and Canadian plazas. He said the employees are logging the date, time, license plates and vehicle information.

After several months of this campaign, Davison said the authority may formally contact repeat offender fleets to alert them to the policy and the need for compliance.

Ryan said traffic flow should improve when a pilot program expected to start in December will allow U.S. officers to inspect trucks on the Canadian side. He also believes it will be more effective if the authority employees can continue committing manpower to knocking on windows of idling vehicles even if they don’t have any power to fine drivers.

“I pledge if that doesn’t work, and people say to them, ‘No, I will not turn off my car or truck because you have no authority to tell me that,’ then I will put a law in to actually make the Peace Bridge terminal a zero-idling area in New York State,” Ryan said.

Environmental activists plan on tracking idling truck activity. The Clean Air Coalition is partnering with GrowWNY, an organization that connects people interested in living green and improving the regional environment, in launching a texting program next month that will allow people to report idling trucks anywhere in the lower West Side, including Peace Bridge property. The information will then be mapped.

“That will hopefully cause the DEC to do something about it,” said Soto of the Clean Air Coalition.

Rivera, meanwhile, said there are plans to relocate a playground at Front Park further away from the Peace Bridge plaza where trucks park.

“Why would you want it by trucks?” Rivera said. “The farther away the better.”

Meanwhile, residents are still complaining about the truck traffic.

Ana Martinez, who lives on Niagara Street, said truckers regularly idle their engines at the bridge plaza; she hears them when she visits Front Park.

“I can smell the diesel,” she said.