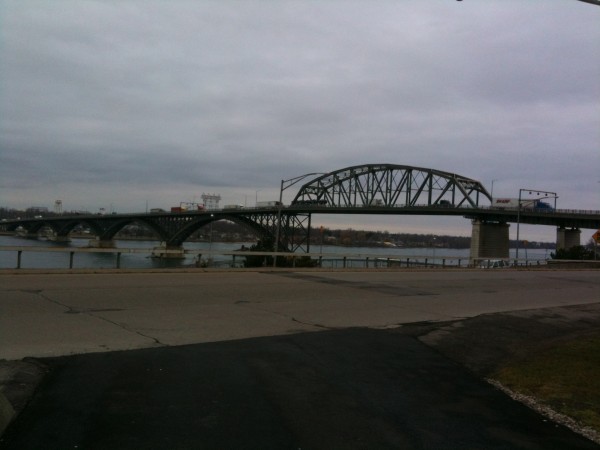 The authority that operates the Peace Bridge and a trio of state agencies maintain that fumes from traffic crossing the bridge have little impact on the health of residents who live nearby.

The Environmental Protection Agency disagreed Friday, and backed up those concerns with a grant to the Clean Air Coalition of Western New York to monitor air quality around the bridge and educate and mobilize neighborhood residents.

The $25,000 Environmental Justice Small Grants Program award announced Friday will be used by the Clean Air Coalition to partner with West Side residents to train them in mobile air sampling and educate them on air pollution factors in their neighborhood and how to bring their findings to those in power.

According to the EPA press release, “people living on Buffalo’s west side, which is the focus of the project, are negatively impacted by air pollution from heavy commercial traffic.”

Erin Heaney, the executive director of the Clean Air Coalition, said her organization will use a curriculum called “Gearing Up For Action” to work with local residents on identifying the pollution problems, reducing exposure to the pollution and taking action.

“The West Side is devastated by commercial truck traffic,” Heaney said on Friday. “You go out and talk to anyone on the West Side and it is clear that truck traffic impacts their health and I think this EPA grant shows that there is a problem on the Lower West Side.”

At the direction of Gov. Andrew Cuomo, three state departments –   Transportation, Health and Environmental Conservation – released a white paper in September that downplayed air quality and asthma issues at the Peace Bridge. The report drew criticism from two University at Buffalo academics, Lower West Side residents and the Clean Air Coalition.

Asthma rates are nearly four times the national average in the West Side neighborhood and people living their suffer from other respiratory illnesses that local studies have connected to diesel emissions flowing from the Peace Bridge.

But the state’s white paper concluded that air quality near the Peace Bridge meets EPA standards and that new technology and ultra-low sulphur diesel will reduce harmful emissions from all diesel-powered vehicles by 90 percent by 2030. The white paper also concluded that poverty, race and socioeconomic factors—not geographic location—play a larger role in the neighborhood’s high asthma rates.

University at Buffalo Professor of Chemistry Joseph Gardella wrote the Buffalo Common Council on Oct. 23 saying that the white paper was released as part of a public relations campaign to “cover up the fact that little data exist about particulate emissions and their impact on the health of residents.”

“The Peace Bridge leadership can claim all they want, but there is a distinct lack of science behind their statements,” Gardella wrote.

William Scheider, a research assistant professor in environmental health for University at Buffalo, authored a critical review of the state’s white paper, saying “the logic and interpretation of statistics in the white paper is deeply flawed and in some cases the white paper misrepresented available information so badly that the motivations behind the paper must be questioned.”