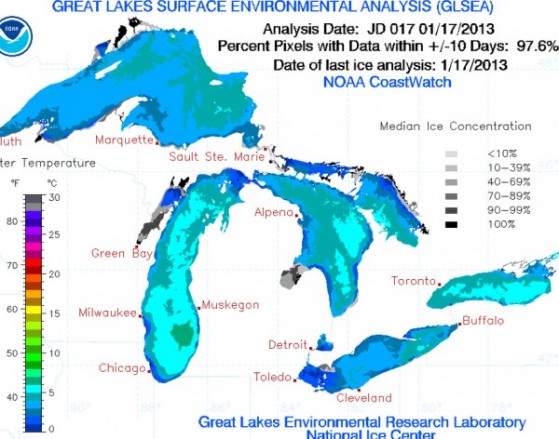 There is less ice cover on the Great Lakes, which poses numerous economic and ecological problems, scientists say. The map above is a snapshot of the Great Lakes for January 17, showing very little ice cover so far.

Normally, Lake Erie would be iced over by the second week of February. For example, watch this ice coverage video that shows each winter day, frame by frame, in 2007.

George Leshkevich, a physical scientist with the NOAA Great Lakes Environmental Research Laboratory, said that while there is variability in the data, trends show there is less ice coverage on the Great Lakes over the past 40 years. He said the least ice coverage year was in 2002 and this past year came close to that record.

“This year I think it is shaping up to be the same,” he said. “The minimums that have been reached have been reached in the past 10 or 12 years.  In other words, it looks as though we are seeing greater change as time goes on.”

But as Leshkevich mentioned, the least ice coverage seasons are popping up more frequently, which meshes with the trend of rising temperatures that we reported on last week. 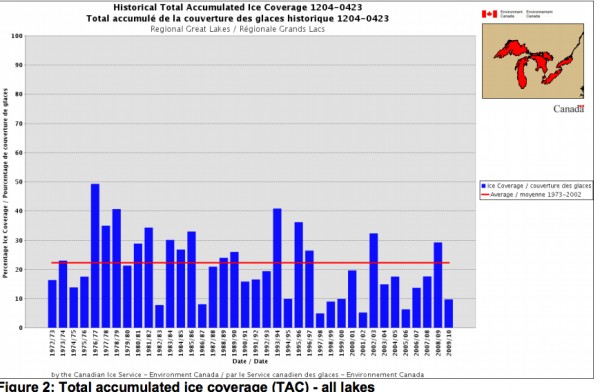 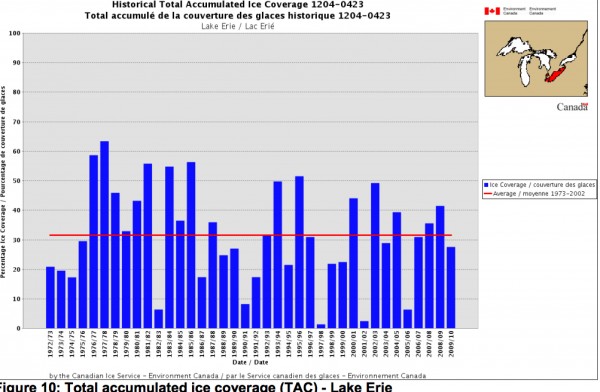 Finally, let’s take a look at the historical data for Lake Ontario, which shows more years below normal than Lake Erie. 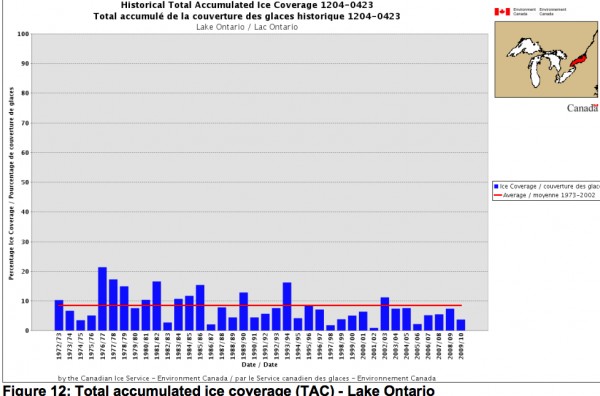 Lake Erie, although nowhere near its lowest water levels, is still about a foot below normal. Water levels in Lake Huron and Michigan were at record lows for the end of December. This is impacting shipping on the Great Lakes.

“They cannot load as much cargo because they cannot get through the connecting channels,” Leshkevich said.

Leshkevich said with less ice cover there will be more evaporation of the water.

“At the end of the ice season, you have a jumpstart on the summer warming season because you never even had any ice cover,” he said. “So your [water] temperatures are above freezing and the heating season can take off because the temperatures are already warmer.

“Depending on your summer and the heat input into the lake, come the next season, you’ve got very warm temperatures and before you can form ice, a lot of that heat has to be lost. If you’re at a higher temperature than you were before, then you are going to need a very cold, prolonged period for the lake to lose that heat before ice can form. It could possibly change the ecology of the lakes.”

Although not directly connected to less ice cover, the higher water temperatures are conditions that harmful algae blooms can thrive in. The longest and largest algae bloom in decades happened in 2011 for Lake Erie after a rainy spring season tracked in more runoff pollution, such as phosphorus, from agricultural land.

Notice all of the green in the picture below from NASA’s Earth Observatory—that’s the 2011 microcystis algae explosion. 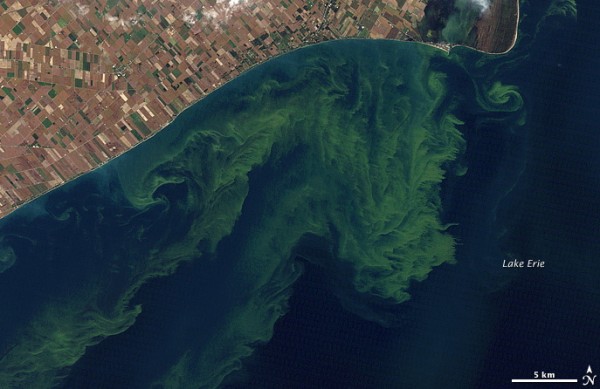 Helen Domske, associate director of the Great Lakes Program at the University at Buffalo, said microsystis can cause skin and intestinal irritation of humans and pets.

But maybe the most alarming concern with the lack of ice cover is how it helps keep the invasive species quagga and zebra mussels alive. Domske said these invasive species have been tied to a botulism outbreak in Lake Erie.

“Ice helps control zebra and quagga mussels because it tends to be a scouring pad,” she said “If there is ice along the shore, then it scours the mussels away, breaks their shells and kills them.”