The Buffalo Municipal Housing Authority, the city’s biggest landlord, is ignoring a City Charter requirement that mandates recycling at apartment buildings and other multi-family housing units.

As a result, roughly 500 tons of recyclable materials end up in a landfill each year, costing the city both money and an opportunity to improve its anemic recycling rate.

There also may be a related out-of-pocket expense to the authority. The authority appears to have engaged a public relations firm to coach officials on how to deal with reporters inquiring about the recycling program. Managers are unwilling to discuss the arrangment, however.

The authority, controlled by Mayor Byron Brown’s appointees, manages 4,307 housing units in 27 developments that are home to about 10,000 low-income and elderly residents. Authority management defended the absence of a recycling program by saying it isn’t mandated by the federal government, which regulates public housing.

Federal laws don’t prohibit recycling and the authority’s admissions and occupancy policies require adherence to  state and local laws, which would include the city’s recycling mandate. The policies also require residents to follow all state and local recycling laws.

Dawn Sanders-Garrett, the authority’s executive director, said in a prepared statement that a pilot program has been launched at the Kenfield-Langfield projects.

“After sufficient information is obtained from that pilot effort, the BMHA will look into expanding recycling to its other housing developments,” she said in the prepared statement she emailed to Investigative Post on April 24.

Investigative Post found no evidence of a pilot recycling program at Kenfield-Langfield during a visit last week.

There was no sign of the green totes that were distributed in December 2011 to one- and two-family houses across the city. Residents at Kenfield-Langfield and the authority’s other developments only have the blue garbage totes that were packed with cardboard, plastic containers, bottles and soup cans—all items that normally would be recycled. 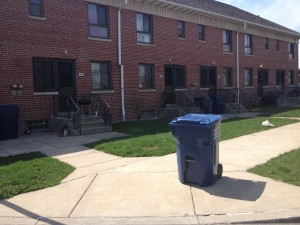 Investigative Post interviewed seven residents at Kenfield-Langfield who all said they haven’t heard of a pilot recycling program. Some said they’ve called the authority and asked about why they don’t have any recycling totes. Another half-dozen people at six other authority developments also said they were not aware of a program.

“It was Earth Day last week and my my daughter is eight and she is really into recycling,” said Charise Stroud, who lives in Kenfield-Langfield. “She always wondered why am I putting everything in the garbage, which I had to explain to her that our housing complex don’t have any recycling at all.”

Authority managers refused to respond to interview requests for two weeks before Sanders-Garrett issued a single-paragraph statement on April 24, apparently in collaboration with Eric Mower + Associates, an advertising, marketing and public relations firm with a Buffalo office.

Investigative Post continued to press for an interview and Sanders-Garrett responded the following day with a second email that said: “The BMHA has provided the statement below that you can feel free to use for your report.”

That’s when an executive at Eric Mower accidentally revealed his involvement.

Sanders-Garrett apparently copied Stephen Bell, a partner and director of public affairs, in her April 24 e-mail to Investigative Post. That prompted a reply from Bell, who copied an Investigative Post reporter.

The e-mail from Bell to Sanders-Garrett read:

“This is cool. Only prob is it challenges him to show up and ‘ambush’ you at the public meeting tomorrow. I may come down tomorrow so we can practice before the meeting. 11?”

While it’s uncertain whether Bell met with Sanders-Garrett, she described Investigative Post’s effort to interview her after the April 25 board meeting as an “ambush.”

Sanders-Garrett refused to answer repeated questions about how much the authority pays the consulting firm and actually denied any consultation.

“I’m not paying a consultant to answer any questions,” she said.

Investigative Post has since filed a Freedom of Information request seeking a copy of the authority’s contract with the firm and recent payments.

The City Charter has mandated recycling for commercial and multi-residential complexes since at least 1996. The city does not enforce the charter requirement, however.

Sanders-Garrett said after the April 25 board meeting that she was not aware of the charter requirement.

“I was not aware of the City Charter, but nonetheless we had already started to take recycling efforts,” she said.

Sanders-Garrett said some residents recycle on their own, but she couldn’t say at which developments or how they do it. Investigative Post visited seven of the 27 developments and saw no signs of recycling.

“The BMHA is in favor of recycling and we will take every effort necessary to get to an authoritywide recycling program,” Sanders-Garrett said after the board meeting.

The city has struggled as a whole to boost its recycling efforts and ended up with a recycling rate of 13.6 percent last year, which includes yard waste, tires and electronics. While that represents an increase from 8.5 percent since the green totes were introduced, the city’s rate still lags far behind the national average of 34 percent.

Investigative Post reported in November last year and in February that recycling efforts in Buffalo suffer because of a lack of a public education program, the failure to hire a recycling coordinator since 2009 and a refusal by City Hall to enforce recycling mandates for commercial and multi-family housing units.

Investigative Post also found that the city’s public schools have failed to adopt a comprehensive recycling program. Since that report, the school system has met with its recycling hauler to improve its efforts.

Based on citywide recycling data obtained from the city under the state Freedom of Information Law, Investigative Post calculated that public housing projects generate each year roughly 500 tons of recyclable waste.

If public housing residents recycled at the same rate as those participating in the city’s program—about half do—the authority would recycle roughly 20 tons per month. Recycling that much helps the city cut down on landfill fees and provides revenue through the sale of recyclables.