Opening Gallagher Beach for swimming is “probably impractical from a public health standpoint” because of stormwater pollution, sediment contamination and neighboring toxic sites, a consultant for the Erie County Health Department has concluded.

The consultant’s analysis, obtained under the Freedom of Information Law, and subsequent reporting by Investigative Post raises serious concerns about a plan being pushed by U.S. Rep. Brian Higgins, Gov. Andrew Cuomo and Mayor Byron Brown.

They want to open the beach for public swimming as part of a larger plan to develop the Outer Harbor into a state park. Higgins, a champion of opening the city’s waterfront to the public, is pressing to open the beach next summer. But the county consultant said presence of potential health hazards require study that could take more time to complete than what Higgins’ timetable calls for.

Erie County Executive Mark Poloncarz has read the consultant’s report and said work must be done to ensure the beach water is safe.

“I’ve commented in the past that until we do more testing … I myself wouldn’t swim in it,” he said.

What are the concerns?

For starters, the Outer Harbor that includes Gallagher Beach is designated as an “impaired waterway” because it does not meet water quality standards. 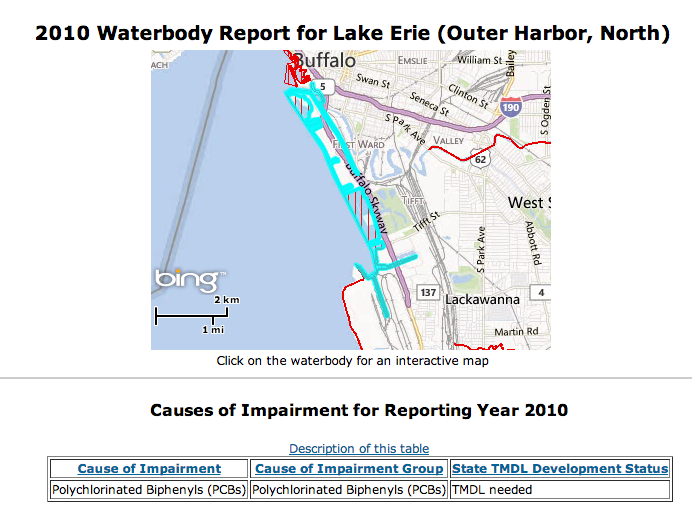 Sediments in the harbor floor are contaminated with PCBs dumped by industry that used to operate in the vicinity. PCBs – banned in 1979 – were used as coolants and lubricants in electrical equipment. While the potential impact on swimmers has not been determined, the state has placed a limit on the consumption of fish caught in the waterway.

Secondly, the beach is downstream from two Class 2 Superfund sites, one of which is still leaching toxins, including cancer-causing benzene, into Lake Erie. A Class 2 designation means the site still presents a significant public health threat.

In fact, benzene has been found in the groundwater at the Bethlehem Steel site – within striking distance of Gallagher Beach – at levels 100,000 times higher than permitted by federal drinking water standards.

“Just because Bethlehem Steel and other sites have environmental contamination does not necessarily mean that that’s going to leach into the water around Gallagher Beach,” Poloncarz said. “But we have to ensure that it’s safe.”

Then there are the concerns identified in the county report, authored by John Finster, the Health Department’s consultant and former senior public health engineer.

“Are the water and sediment of the beach contaminated? If so, is there continued leaching contamination?” he asked in his report.

Finster concluded: “The idea of a public beach in the area is appealing but probably impractical from a public health standpoint.”

Higgins said he isn’t aware of any documented evidence of contamination in the sediment or water at Gallagher Beach.

When questioned about potential PCB contamination of the sediment, he said, “I’m telling you, it’s not.”

But he acknowledged that additional water testing will be conducted.

“The water testing will determine whether or not the waterway is contaminated. If it’s contaminated, it can’t be used as a swimming beach,” he told Investigative Post.

Discharge of stormwater a concern

Experts agree that water at the beach needs to be tested.

“This section of the Outer Harbor has not really been studied and assessed very closely in recent years,” said Jill Jedlicka, executive director of Buffalo-Niagara Riverkeeper.

Testing at Gallagher Beach has been limited to water samples taken in 2003 and 2012, both drought periods, to check for the presence of E-coli and similar bacteria. Despite the lack of rainfall, the water at Gallagher Beach failed to pass the grade on five of 29 days tested in 2003 and two of 39 days in 2012.

Water conditions are much worse 6 miles south at Woodlawn Beach in Hamburg. Bacterial contamination from storm and sewer overflows prompted authorities to close or issue an advisory for swimming at Woodlawn more than any beach in the county between 2003 and 2012 – 556 days. Any migration of those contaminants to the Outer Harbor has not been studied.

The presence of at least two stormwater discharge points south of Gallagher Beach, including the large one Finster mentions in his report, are a potential problem.

The state bathing beach code prohibits a public swimming beach within 750 feet of a stormwater or sewer discharge point. The larger pipe appears to be located only 600 feet from the beach, according to Finster’s report.

These discharge pipes during heavy rain dump untreated runoff directly to the shore of Lake Erie and can harm water quality.

Indeed, Investigative Post visited the area during a recent rain and found garbage, rotting vegetation and geese droppings along the shoreline near the discharge point south of the beach. 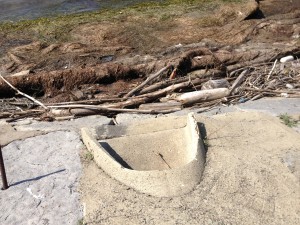 “Stormwater runoff is the leading cause of beach water pollution that causes closures and health advisories and it is definitely an issue with the Great Lakes,” said Larry Levine, a senior attorney with the National Resources Defense Council.

The refusal of state officials to grant interviews makes it unclear precisely what, if any water quality tests will be conducted prior to Gallagher Beach being opened for swimming.  But the state bathing beach code requires a comprehensive sanitary survey that goes well beyond the testing that’s been done at Gallagher Beach.

Water is tested for bacteria, acidity and cloudiness for eight weeks, and the testing period must include samples for five consecutive days after heavy rain. To pass the test, the water must meet bacteria standards and be free of chemicals that can cause reactions in swimmers.

A full assessment of this nature can take a lot of time to complete.

“We’ve seen cases where it can take two or three seasons to get everything in line and in place,” said Helen Grebe, regional coastal monitoring coordinator with the U.S. Environmental Protection Agency.

Toxins at nearby Superfund sites

The sprawling Bethlehem Steel site located less than a half mile upstream from Gallagher Beach is a particular concern.

Plant operators dumped slag into Lake Erie before the facility closed in the 1980s. That slag, which eventually expanded the plant site by 440 acres, contains numerous chemicals, including benzene, and contaminated groundwater from the site leaches into Lake Erie.

“The site presents a significant environmental threat due to the ongoing releases of contaminants from source areas into groundwater,” according to DEC documentation. “There is also the potential that contaminated groundwater is impacting Lake Erie.” 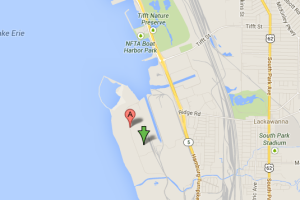 A study on how to remediate the remainder of the site is slated for completion next year. The DEC refused to provide Investigative Post a timeline of when remediation work would be completed.

The EPA website for the Bethlehem Steel property states the property owner, Tecumseh Redevelopment, is not required to take interim steps to mitigate groundwater contamination unless an emergency is discovered during the course of an investigation. The EPA asked Tecumseh to take interim steps to control groundwater contamination in 1994, but the company refused.

The second Superfund site near Gallagher Beach is a 5.5 acre dump at the former Hanna Furnace iron foundry located 200 feet north of the Union Ship Canal.

The canal, which has heavy metal sediment contamination that includes mercury and lead, is located less than 3,000 feet south of the beach and flows into the Outer Harbor. Another 22 acres of the Hanna property has been transformed into a public park.

The dump is mostly fill composed of flue ash and impurities scrubbed from furnace exhaust. The leading contaminant of concern is lead.

“I saw one that looked fine until it turned and went up on its side,” he said.

I said ‘Ewww.’ The tumors were going down the side by its gills. Things are looking up but there’s so much more that can be done.”

The discharge of groundwater contaminants into the Union Ship Canal is considered a minor environmental risk, according to DEC records. Contaminants found exceeding groundwater standards at the dump site include arsenic, benzene and phenols.

Given the number of potential environmental problems in and around Gallagher Beach, Poloncarz said public health needs to be a priority in determining whether to open it for swimming.

“The most important thing that my administration’s worried about is not whether the beach is open for people to swim in it. It’s whether once it’s open, is the water safe?” he said.

A print version of this story is published in this week’s edition of Artvoice.