Carl Paladino is a RINO

RINO is a four-letter word to Carl Paladino.

It’s short for “Republican In Name Only.” Paladino dismisses many mainstream Republicans as RINOs for failing to subscribe to his Tea Party-flavored politics, committing the sin of compromising with Democrats or contributing to their campaigns.

Republicans donating to Democrats is supposedly so repugnant to Paladino that he organized a protest outside a fundraiser Dec. 16 that was co-hosted by GOP heavy hitters to benefit Congressman Brian Higgins.

Paladino held a sign for part of the demonstration that read: “No Funding For Dems.” 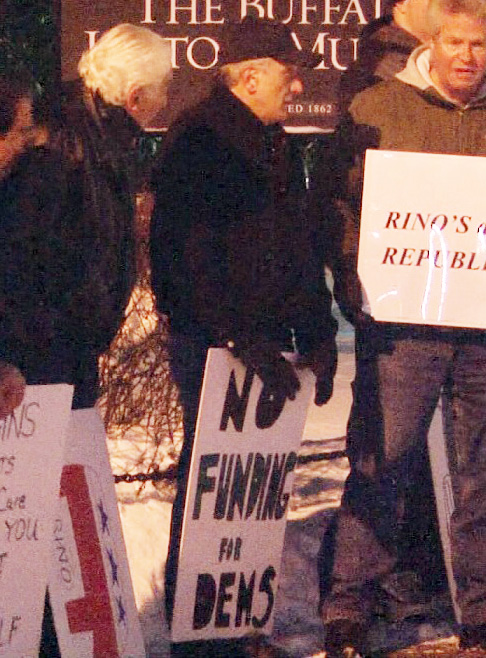 Paladino, center, holds sign at December protest that reads “No Funding for Dems.”

The fundraiser put one of its organizers, Anthony Gioia, who has raised more than $3 million for Republican causes over the years, on Paladino’s RINO list. Gioia  joined the likes of of Senate President Dean Skelos, Assembly Minority Leader Brian Kolb, and Sen. George Maziarz, who two years ago was rated the most conservative member of the state’s upper chamber.

An Investigative Post analysis of campaign contributions found there’s one more prominent name to add to the RINO roster.

State Board of Election records show he and his companies have contributed $49,000 to 31 Democratic candidates and committees since January 2011, after the conclusion of his ill-fated campaign for governor.

The list goes on to include Democrats who are members of the Erie County County Legislature, Buffalo Common Council, Niagara Falls Council and judges who sit on the benches of numerous local and state courts. 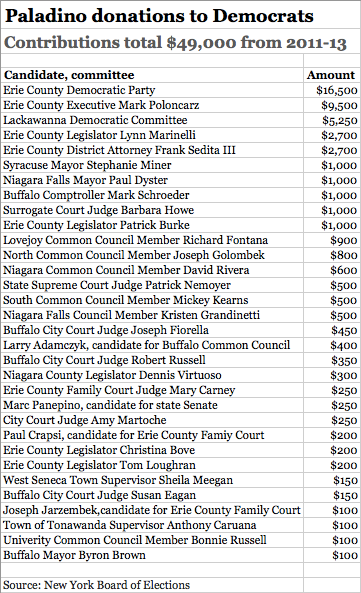 In some instances, the Democrats he donated to were cross-endorsed by the Republican Party or ran unopposed. But in many other cases, Paladino gave to Democrats, like Poloncarz and Dyster, who are major party figures and compete in elections against candidates backed by the Republican and Conservative parties.

Gioia, who raised more than $1 million each for the presidential campaigns of Mitt Romney and John McCain, makes no apologies for co-hosting the Higgins fund-raiser. Nor does he object to Paladino giving to Democrats.

Maziarz sees “some inconsistencies” between Paladino’s rhetoric and his donations to Democrats.

“Does it seem a little disingenuous? It certainly does,” he said.

Paladino refused to comment for this story, twice hanging up on a reporter.

Using Paladino’s definition, his son, William, could also be categorized as a RINO. William Paladino is CEO of Ellicott Development, the family’s primary company. Democrats account for one-third of the 15 candidates he’s contributed to since 2011.

His donations to Democrats account for $2,100 of his $27,350 in contributions, including $500 each to Brown, City Comptroller Mark Schroeder and Assemblyman Sean Ryan, who rents office space in a Paladino-owned office building on Delaware Avenue.

“I give to people who I consider good candidates, whether they be Democrat, Republicans or Conservative,” William Paladino said.

It’s worth noting that most of Carl Paladino’s individual and corporate contributions since 2011 have gone to Republicans. Over the past three years he has contributed $356,652 to Republicans, Conservatives and right-leaning political committees, versus $49,000 to Democrats. 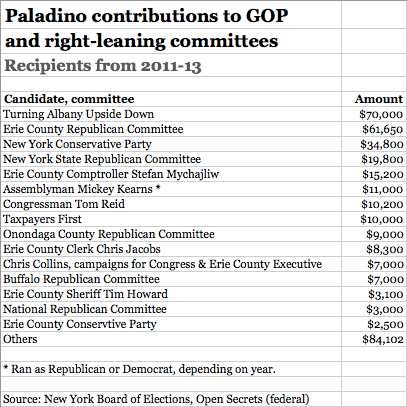 That means Democrats are getting about $1 in $8 dollars. Coming from most donors, that would not be an issue. But in Paladino’s case, he has called out Republicans for giving any money to Democrats.

“Please come with your signs “RINO’s are NOT Republicans” This is totally unacceptable. The Republicans are raising money to help further the Democratic agenda which is ultimately destroying our Country. Now is the time to stand strong for our values. We need to send a message that this kind of political game playing will no longer be tolerated.”

Large donor to both parties

Paladino is a Johnny-come-lately to the Republican fold, as he was a registered Democrat until October 2005. He’s long been a major donor to candidates from both parties, including those in a position to do business with Paladino as a commercial landlord.

An investigation by The Buffalo News in 2010 found he had donated $468,787 to political candidates and party committees since 1999. Democrats received about 40 percent of the donations. Another investigation found that during that period, Paladino became the government’s largest commercial landlord in Erie and Niagara counties, collecting $10.1 million a year in rent from federal, state and local entities.

While an outspoken figure and a major donor, Paladino did not seek elected office until he ran for governor in 2010. He won the Republican primary before losing in a landslide to Andrew Cuomo by a 63 to 33 percent margin.

Controversy dogged his campaign, including revelations of his history of sending racist and pornographic emails, comments regarded by critics as racist, sexist and homophobic, and a threat he made against a reporter to “take you out.”

Paladino laid low for a while after his gubernatorial race, but he reemerged in 2012 spewing harsh rhetoric against mainstream Republicans and Democrats alike. He also won election last May to the Buffalo Board of Education.

Paladino sees himself as speaking truth to power, advocating conservative values and challenging Republicans he considers too willing to compromise with Democrats for the sake of political expediency. Hence, his use of the RINO label.

His campaign contributions since 2011 largely reflect his rhetoric, as evidenced by donations that strongly favor Republicans. In fact, all his donations the past three years at the federal level have gone to Republicans, in marked contrast to earlier, when he wrote large checks to the likes of Higgins and then-Sen. Hillary Clinton.

But, at a time when he has criticized others for donating to Democrats, he has done likewise at the state and local level.

Likewise, the $9,500 he’s contributed to Poloncarz as county executive is more than what he’s given to County Clerk Chris Jacobs ($8,300) and County Sheriff Tim Howard ($3,100), both Republicans.

Paladino has given at least $1,000 to 10 Democratic candidates and party committees. Some of them include the Lackawanna Democratic Committee ($5,250); Sedita, the district attorney; and then-Erie County Legislator Lynn Marinelli ($2,700 each).

While small, the $100 he gave to Brown’s re-election campaign is noteworthy. Paladino rarely donates to black political candidates and was a major financial backer of Brown’s opponents for mayor in 2005 and 2009.

Unlike the 2009 election, Brown faced a Republican challenge last November from the spirited, but underfunded, Sergio Rodriguez. Yet Paladino sat out the race, the first time he had done so in more than 30 years.

He had been in the running to develop the Webster block near the foot of Main Street, but that bid was awarded to the Buffalo Sabres. The team is building a complex with hockey rinks, a parking ramp and a hotel, restaurant and shops.

Granting Paladino rights to the parcel in Erie Basin Marina was widely perceived in development and political circles as a consolation prize that kept him neutral in the mayor’s race, aside from a $100 donation he made to Brown.

Paladino’s contributions to Brown and Poloncarz – the county rents office space from a Paladino company – are in keeping with his history of donating to politicians in a position to do business with him.

“Carl is a businessman,” Maziarz explained, “and businessmen tend to try to hedge their bets in their contributions and support both side of the aisle.”

Put profits before principles? Isn’t that what a RINO would do?

“That’s a better question to ask Carl Paladino than George Maziarz,” the senator said with a chuckle.

For once, however, Paladino isn’t talking.

Andrew Bailey of Primary Data developed the campaign data for this report.