Appraised at $1.7 million, purchase of property Cuomo wants for plaza expansion will cost up to $27 million in public funds
By Dan Telvock

The property was a mess — contaminated, mired in debt and depreciating in value — but Gov. Andrew Cuomo wanted it bad.

To buy the abandoned Episcopal Church Home, a property considered essential to an expansion of the Peace Bridge plaza, state government under Cuomo’s direction paid a premium and inherited a costly environmental cleanup.

The final tab hasn’t been tallied, but it could run as high as $27 million, for a property appraisers hired by government said was worth less than $2 million.

The Cuomo administration maintains it made the best of a bad situation. The property has strategic value and the Episcopal Church Home was deep in debt without the resources to deal with the site’s numerous problems. Something had to give, and tapping the public treasury was unavoidable, the administration contends.

“The state believes that the acquisition of the ECH property was a priority in order to preserve the property for future redevelopment and to serve the public interest and the many constituencies who had been held hostage by this stagnant situation,” Peter Cutler, a state spokesman, said in an email.

The deal underscores the financial consequences of Cuomo’s drive to expand the bridge plaza over the objections of neighborhood residents, who fear the health impacts of moving traffic deeper into a community whose residents are already beset with respiratory problems that studies have linked to bridge traffic.

“They want to solve what they perceive to be a problem while at the same time ignoring the health risks to the residents who live, work and go to school in their neighborhood,” Golombek said.

A skilled nursing facility and adult day care facility had operated at the site, owned and operated by Episcopal Church Home and Affiliates, a non-profit that continues to own or manage six other facilities. Its properties include Canterbury Woods, an upscale senior complex in Williamsville that it intends to replicate as part of a planned redevelopment of the Millard Fillmore Gates Circle Hospital site in Buffalo. 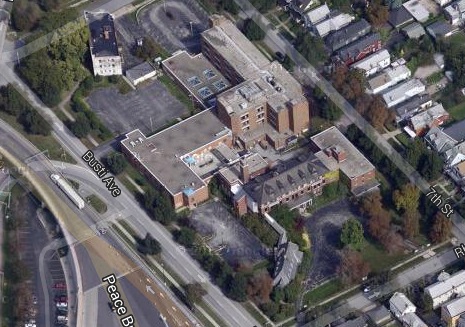 The 7-acre campus of the Episcopal Church Home.

The Episcopal Church Home closed its skilled nursing facility on Rhode Island Street in 2005 and the adult day care center in 2007. Former administrators said the state’s Medicaid reimbursements had long been insufficient. Adding to the financial woes was an order from the state Health Department to reduce the Episcopal Church Home’s population by half to bring it in line with the capacity established in its license.

Episcopal Church Home was one of at least four such facilities in the Buffalo area that closed the latter half of the last decade largely because of the financial stress caused by state Medicaid reimbursements. 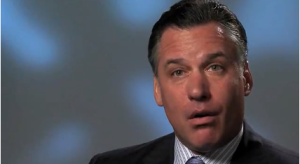 Robert Wallace, president and CEO of Episcopal Church Home and Affiliates, blames the closing on the uncertainty caused by the prospect of Peace Bridge expansion that would have taken the property.

Cutler, the state spokesman, made the same claim in an email, saying, “The Episcopal Church Home property has been a victim of the Peace Bridge.”

But former Episcopal Church Home administrators faulted the state’s Medicaid reimbursements, not the prospect of bridge expansion, as the chief reason the doors closed.

“While we have been under a cloud of uncertainty for some time now regarding plans to build a new bridge crossing to replace the Peace Bridge, our decision to close our skilled nursing facility and related programs on the Rhode Island Street campus is the result of significant and ongoing financial losses primarily because of New York State’s Medicaid reimbursement program,” Edward Weeks, then president and CEO of Episcopal Church Home and Affiliates, wrote the Peace Bridge Authority in 2005.

The buildings and grounds subsequently began to fall into disrepair and the parent organization struggled to pay its bills. Wallace, the home’s current president, maintains the continued prospect of bridge expansion made the property unmarketable.

“Nobody would buy it,” he said. “As soon as they found out the Peace Bridge could take that property, I couldn’t sell the [property] to pay off the debt.”

However, Investigative Post found that at least two potential buyers expressed interest in the property, including D’Youville College, which was looking to expand its West Side campus. College officials were rebuffed a few years ago when they inquired about the property, said John Bray, D’Youville’s director of public relations and communications.

Instead, the college purchased the Gateway Longview Building on Niagara Street to expand.

Cuomo took office in 2011 and he soon made expansion of the Peace Bridge plaza on the Buffalo side a priority. The following year, the state took steps to purchase the Episcopal Church Home property to accommodate an expansion.

The timing of the sale coincided with the city foreclosing on the property for unpaid taxes. An auction would have taken place last October. To head that off, the state closed on the property four months before the auction.

How much is the property worth?

The Episcopal Church Home obtained an appraisal that valued the property at $14.1 million in 2007, when the facility was closed and its buildings were in good shape.

The state and Peace Bridge Authority obtained two appraisals in 2012 that set the value of the deteriorated property much lower— $1.64 million and $1.86 million.

Click any of the eight links below to view the state’s appraisals.

Those appraisals assumed the property would not require a costly environmental remediation. But in May 2013, a month after signing a deal to obtain the property for $4.7 million, the state received a report from an engineering firm it had hired to conduct an environmental assessment of the property.

Sam Hoyt, executive vice president of the Empire State Development Corp., the state entity that bought the property, said officials knew about the environmental problems and potential costs before the sale. Nonetheless, the purchase price stayed the same.

“The cost associated with removing this blight may total $14 million and our goal at ESD is to remove the blight from the neighborhood,” Hoyt said.

Why would the state pay $4.7 million for a property its appraisers said was worth no more than $1.86 million?

It appears the sales price was pegged not to the value of the property, but the debts the Episcopal Church Home’s parent organization had incurred since closing the facility.

“The purchase price recognized that the property was heavily encumbered by liens and that a number of creditors would need to be satisfied in order to obtain free and clear title,” Cutler, the state spokesman, said in an e-mail.

The purchase price not only covered most, but not all of the organization’s debts, but also allowed it to repay its creditors.

Here’s how Episcopal Church Home and Affiliates spent most of the $4.7 million:

Golombek, the Council member, criticized the state’s willingness to pay a premium for the property.

“I’m not necessarily surprised when the state throws money all over the place,” he said. “They’ve had problems for years and years and years of not being fiscally sound.”

The state comptroller has the power to review contracts worth over $1 million before they are executed. But the Cuomo administration did not give Comptroller Thomas DiNapoli the required heads up on the purchase.

Instead of reviewing the deal, the comptroller’s office said it was given assurances that Empire State Development “will follow the process in the future.”

Jennifer Freeman, communications director for the comptroller, said: “Given the contract was already executed, this could become a post-audit issue. In other words, down the road we may audit this issue.”

The state’s purchase of the property was the final in a series of maneuvers that also involved considerable public expense.

At the urging of the state, the Peace Bridge Authority in August 2012 bought a mortgage on the property that the Episcopal Church Home had defaulted on the year prior. The mortgage was valued at $6.2 million.

The purchase cost the public in two ways:

Officials at the U.S. Department of Housing and Urban Development refused to release documents or grant interviews regarding the transaction. In response, Investigative Post has filed a Freedom of Information request for the public records.

A second cost to the public involved a decision by the state last year to waive $1.8 million in judgments against the Episcopal Church Home for Medicaid overcharges.

The state decided to forgo the debt because the state was “unlikely to ever receive payment,” said Pamm Lent, a spokesperson for the governor.

Future use of the property

What are the plans for the property?

State officials have been vague. In public documents they offer three possibilities: an expanded plaza, commercial development or open space as a buffer for neighborhood residents.

“The final use of the entire parcel has not been determined,” Hoyt said. “These people will see green space regardless of what the use is.”

Neighborhood residents and activists fear that Cuomo will use the property to expand the plaza. That would move traffic and fumes deeper into the neighborhood where residents in one in three households suffer from asthma that studies have linked to cars and trucks crossing the bridge.

“There will be a bigger Duty Free store there and the [Peace Bridge Authority] … will make a heck of a lot more money and the people in that neighborhood will be sicker,” said Golombek, the Council member.