The Weaver family and their neighbors on Peabody Street may be the only people in Buffalo who don’t look forward to warm weather.

That’s when concrete crushing kicks into full gear at Battaglia Demolition, a construction and demolition processing facility that abuts their homes in the gritty Seneca Babcock neighborhood about a mile southeast of downtown.

“I can’t open my windows because of all the dust from the rock crushing,” Jan Weaver wrote to the state Department of Environmental Conservation last fall.

Between 80 to 200 diesel trucks a day rumble down Peabody Street loaded with concrete, scrap metal and other construction and demolition debris.

Neighborhood residents have complained for a decade about the impact the business owned by Peter Battaglia has on their health and quality of life, but to no avail.

Homes shake. Dust blankets cars, homes, pools and toys. A noisy yellow excavator digs into the heaps of concrete at the crack of dawn. Children have trouble breathing or get bloody noses.

“It is hard for my kids to play outside because there are so many trucks up and down the street and they go so fast and all the rocks in the street,” Jan Weaver continued in her complaint.

“My kids are always getting bloody noses and all I hear all day long is the beeping from the trucks.”

Investigative Post has interviewed a dozen people and pored through hundreds of state and city government documents that shine light on the bizarre, never-ending drama that has left residents feeling hopeless.

These disputes are the latest in a long line of battles that have left residents feeling they are victims of legal and bureaucratic inertia.

“Everyone knows about the problems with Battaglia, nobody knows what to do about it,” said Jack Wagner, a Peabody Street resident.

As Battaglia sees it, he’s a victim of state regulators and city officials singling out his business to thwart his expansion.

“I have become a political punching bag,” he said.

The Seneca Babcock neighborhood flourished until the state built the Thruway in the 1950s, splitting the community.

Slum and blight began to run rampant like weeds in a neglected yard. The devastation sent people packing. The two schools—one public, one Catholic—closed. The neighborhood transformed into one of the city’s poorest.

Bordering sex shops, junk yards, auto repair shops, a chemical plant and old commercial buildings make the neighborhood an enclave. Economic factors have improved over the past decade, but there still isn’t a doctor’s office, drug or grocery store within a mile radius.

An urban renewal plan for the neighborhood the Council passed in 2005 was an attempted rescue. One of its primary objectives is to “eliminate blighting influences and environmental deficiencies and to remove substandard and obsolete conditions, and incompatible land uses and dust generators.” The plan also called for more code enforcement and prohibited any use that generates outdoor emissions or vibrations. 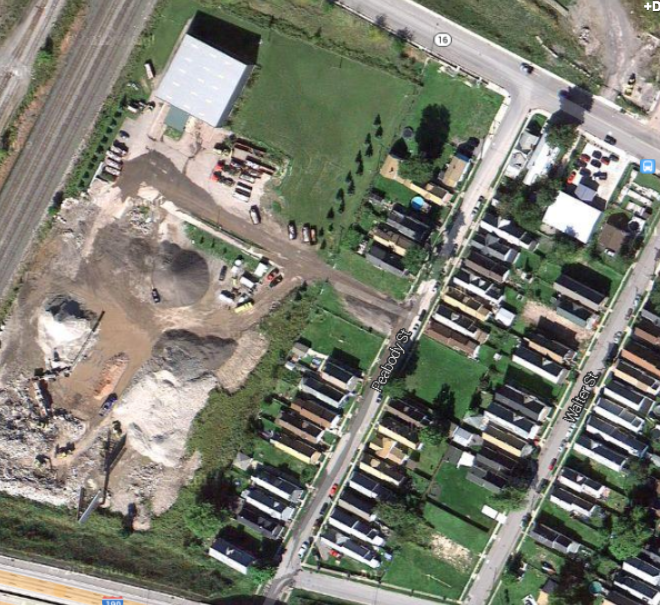 Five years later, the city prohibited businesses that crush concrete in this neighborhood. This thwarted Custom Top Soil’s effort to start a crushing operation at 1070 Seneca St. because it lacked the necessary city permits.

But Battaglia, with permits in hand, opened across the street nine years before the zoning change. His operation is grandfathered in.

His business handled almost 7,000 tons of debris in 2012, according to documents filed with the state. Piles of concrete rubble as tall as the homes on Peabody Street are an unsightly scene to his neighbors.

This doesn’t sit well with residents.

So Battaglia turned to “kindness.”

“It’s always good to be a nice neighbor,” Battaglia said.

His family has collected trash in the community. He landscaped by the Seneca Babcock community sign inscribed, “Where Neighbors Care.”

“And he did a great job on it,” said Art Robinson, president of the Seneca Babcock Block Club.

“One year for Christmas he gave me a $300 check for my grandson,” said Diane Lemanski, a Peabody Street resident. “I don’t need his money.”

“He tried to win all of us over so we’d allow him to do whatever he wanted back there,” she said.

Then there was the $1,000 he offered to Franczyk, who has opposed all of the businessman’s expansion plans. Why would he offer to help his nemesis on the Council?

Battaglia said a Franczyk associate approached him for a campaign contribution.

“It was a political donation,” Battaglia said.

However, Franczyk said, “nobody in my office would ever approach him to give money to me.”

After he discovered the envelope contained a $1,000 check from Battaglia, Franczyk ran to confront him in the hallway.

“He said, ‘I thought this is the way things are done,’ and I said, ‘not around here it isn’t,’ ” Franczyk said. 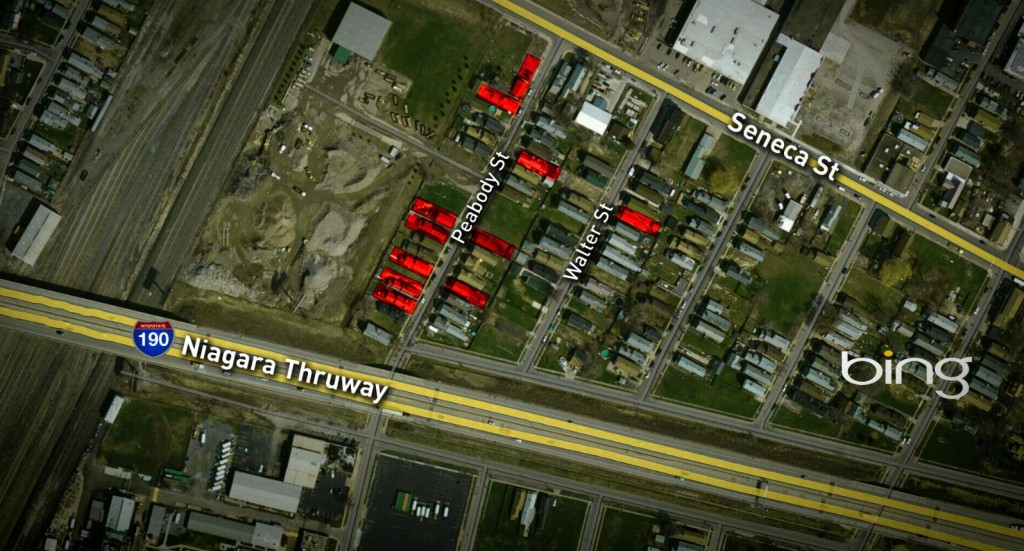 Residents in the red homes complained to DEC at least once last fall. Battaglia’s business is to the left. (Credit:WGRZ)

Sisters Jan and Jill Weaver together have eight children, five of whom have some type of breathing problem or get bloody noses.

Other families have similar problems.

“I have asthma and the dust makes it very hard for me to breath [sic],” wrote Tracy Lee.

“My 12 year old son gets migraine headaches to the point that he is vomiting, has to be in a quiet dark place with an ice pack on his head.”

“As they hammer and crush concrete my house shakes and vibrates,” Lemanski wrote. “The loud noises from hammering and crushing. Can’t open windows all summer long.”

“The rat population on my street has multiplied to the point that they are starting to invade my home,” wrote Shirley Parker.

Her complaint is corroborated by a November 2004 police report in which officers noted Battaglia’s warehouse had “trash piled up to the ceiling with hundreds of rats all over the trash.”

Some residents expressed concerns about exposure to cancer-causing toxins.

State environmental regulators concluded three years ago that brick and concrete fragments drift into the neighborhood from Battaglia’s operation. The concrete dust likely contains silica, a carcinogen, the report said.

“Although this dust may cause irritation, the particles are large enough to settle, so they are not a concern for the chronic health effects typically associated with crystalline silica,” a DEC spokesman said in an email.

Battaglia hired a consultant to test for silica in 2009. Silica was in one of four samples on site, according to the independent environmental consultant. He had collected the samples in February when the business is not crushing as much concrete.

Concrete and other demolition materials made before 1960 can contain asbestos, and “without regular sampling, we also don’t know to what extent asbestos dust is getting into the air,” Gardella said.

He wants city and state officials to eliminate exposure to the community if Battaglia isn’t willing to make any operational changes.

“I don’t really think he understands the environmental impact of what he’s doing,” Gardella said.

On Dec. 7, 2011, the state environmental officials cited Battaglia for not using water to dampen the concrete dust. Workers unhooked the hose for maintenance, Battaglia said.

One way state regulators can control air pollution is through an air permit.

State regulators have cited Battaglia at least twice for operating a crusher of a size that requires an air permit.

Battaglia said Al Zylinski, an officer of DEC’s division of air resources, reversed the decision after inspecting the crusher on Dec. 20, 2011.

Yet, state environmental regulators subsequently cited Battaglia again for operating the equipment without an air permit.

Battaglia’s solid waste permit that allows him to collect and process the debris expired last February. A state spokesman said this type of violation does not normally result in forcing the business to shut down.

State environmental officials and an administrative law judge are trying to resolve these issues with Battaglia.

“Despite these efforts, a legal dispute between Mr. Battaglia and DEC continues on several issues. DEC is considering its options for enforcement at this time,” an agency spokesman said in an email.

“It could be a mistake, I don’t know if it is or isn’t, but let me put it this way: it’s an error and we don’t know the motivation behind it,” he said. “They told me it was a clerical error.”

Two days after Investigative Post sought an interview with Sole, the city’s director of Permit and Inspection Services, someone from his office went to Battaglia’s business and revoked the license.

Battaglia has faced numerous roadblocks in his two efforts to expand the business since 2005.

Battaglia sought approval to receive municipal waste by rail to process at his business. This came two years after the unrelated “trash train” incident when hundreds of rail cars loaded with stinky, rotting New York City garbage sat abandoned on the Clinton-Bailey tracks near his facility.

Battaglia now wants to increase tenfold the amount of waste delivered to his business. That would be top in the region with up to 41,600 tons per month. That’s an average of 165 trucks a day up and down Peabody Street. He also wants to build an addition and second entrance on Peabody Street and extend operating hours on Saturdays.

Battaglia has had a few advocates, including Carl Paladino, a prominent city developer. Paladino is not only a customer, but Battaglia’s first cousin.

“I just want to run my business and be able to pay my costs of running my business,” Battaglia said. “I made substantial financial investments for our facility.”

One of those investments is a $1.2 million concrete crusher—the second-largest portable model available from the manufacturer.

Shortly after he started using this crusher, the complaints to the state environmental officials reached an all-time high.

Ten years is a long time to complain about one business.

“I’m amazed that nobody is coming down here saying we’re here to help you,” said Wagner, the Peabody Street resident. “Where’s our help?”

Efforts to enforce regulations and move Battaglia’s entrance to Seneca Street fell flat. The fate of his expansion is uncertain.

On March 10, residents aired their concerns with city and state environmental officials at a meeting organized by the Clean Air Coalition of Western New York.

Robinson, the block club president, hopes the Department of Environmental Conservation can convince the attorney general to file an injunction against Battaglia.

“I’ve never wanted to put him completely out of business. I just want the concrete crushing stopped,” he said.

Battaglia said his business is a benefit to the community by recycling construction and demolition debris. He doesn’t understand the backlash, but offered a solution.

“If I am such a harm to the community in doing so, bring down a check, compensate me for what I have invested and I will leave,” he said.