Young children in Erie County, mostly from Buffalo’s inner city, are testing positive for lead poisoning at more than triple the state average.

As a result, hundreds of children enter Buffalo schools every year dealing with the impacts of lead poisoning, which can include lowered IQ and behavioral problems. The chief source of the problem is lead-based paint chips and dust in Buffalo’s old housing stock.

“Buffalo is ground zero in the entire country for lead poisoning,” said David Hahn-Baker, a local environmental activist who has studied the lead problem for three decades.

Yet City Hall treats lead poisoning as someone else’s problem to resolve.

City officials dispute that they’re ignoring the problem. They maintain that the city and county agreed long ago that the county Health Department would take primary responsibility for tackling lead hazards.

Officials also note that the number of lead poisoning cases in Buffalo is dropping thanks to programs such as the Green and Healthy Homes Initiative in which the city is participating.

But the fact remains that the present effort falls short of the need.

Children in Buffalo are testing positive for lead poisoning at more than triple the state average, the City Charter doesn’t allow for an effective enforcement program, and it will take decades for inspectors to canvass all of the city’s potentially contaminated properties.

That’s left many advocates saying that City Hall needs to be more involved and proactive.

The key is leadership, said Hahn-Baker.

“We really need the leadership to look at everybody and say, ‘You all need to do your part,’ ” he said.

Much of Buffalo’s housing stock is suspected of containing lead because most of it was built before lead paint was banned in 1978. In fact, Census data shows Buffalo has the highest percentage of homes built before World War II than any large city in the country. 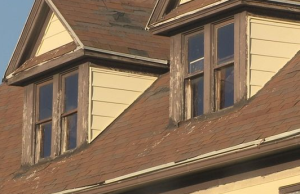 Peeling paint on old homes is a source for lead hazards.

“We’ve known about the toxicity of lead for a millennium, and here we are still wondering, ‘Gee, what are we going to do about it?’” said Matthew Chachere, a staff attorney for the nonprofit advocacy group Northern Manhattan Improvement Corp., at a conference in Buffalo this spring.

Other cities, including Rochester, have determined that their inspectors need to periodically get inside rental units to test for lead hazards and passed a law to mandate access. Similar to Buffalo, about 60 percent of Rochester’s housing is renter occupied and research shows these residences have the most lead hazards.

Buffalo has no such provision for one- and two-family rentals: for inspectors to gain entrance, the owner or occupant would have to grant them permission to enter. County health sanitarians conducting door-to-door inspections gain entry only a quarter of the time.

“If we had a complaint that was specifically about lead we refer it over to the county,” said Lou Petrucci, assistant director of the city’s Department of Permit and Inspections Services.

The city does mandate interior inspections every three years for dwellings with three or more units.

In all, Health Department sanitarians inspect about 2,000 homes a year. That’s less than 3 percent of the total number of Buffalo’s at-risk homes.

A cycle of re-inspections for at-risk homes is important, according to experts. The federal government recommends that property owners have their homes re-evaluated every two years if they use temporary measures, such as painting over the lead-based coating, to control lead hazards.

Doing this in Buffalo would require legislative action.

“We don’t make policy,” Petrucci said. “Policy would have to be made by the Common Council or the mayor.”

The county Health Department’s 12 sanitarians spend about two-thirds of their time conducting door-to-door inspections in the city’s most at-risk neighborhoods. These neighborhoods are chosen for a number of factors, including age and condition of housing and prevalence of lead poisoning cases.

But three-quarters of the time, their efforts are limited to testing for lead on house exteriors, as owners and occupants deny them access to test inside.

“Some people do slam the doors in our face and some people welcome us in and they are really interested in finding out if they have a problem with lead,” said Dr. Gale Burstein, the county’s health commissioner.

The Health Department has five additional staff members who work with families who have a child poisoned by lead. In some cases, they conduct a complete environmental investigation in homes to determine all potential health hazards.

Basically, your home becomes your enemy.

In all, Health Department sanitarians inspect about 2,000 homes a year. That’s less than 3 percent of the total number of Buffalo’s at-risk homes.

Health sanitarians have yet to inspect Tamara Riphahn’s turn-of-the-century home on the West Side.

A doctor informed Riphahn a year ago that her son, then six months old, had elevated blood lead levels. Although she’s not certain, she suspects the cause is lead paint dust from her home or migrating from neighbors renovating their houses.

The amount it takes to poison a child is less than what would fit in a sugar packet.

“You have to be so diligent about constantly washing hands and cleaning all the time otherwise it just happens,” she said.

“Basically, your home becomes your enemy.”

Despite the city’s hands-off approach, the Health Department can report progress.

More than 85,000 homes in Buffalo are at risk for lead hazards. Check out this map to see which neighborhoods are most at risk.

State health data for 2006 through 2011 shows almost a 40 percent drop in the number of children testing positive for lead poisoning in Erie County.

The rate is still the worst among the 11 counties in the state that test 10,000 or more children a year, according to the most-recent state health data. An average of 350 children a year – more than three-quarters of whom live in Buffalo – continue to test positive with blood lead levels that are at least double the minimum that the Center for Disease Control says requires medical intervention.

Many experts interviewed by Investigative Post believe the city needs a champion to galvanize the community around policy change.

“It’s not that leadership has done bad things at the local level, they haven’t done enough,” Hahn-Baker said.

The Common Council took steps in February that surprised advocates and sparked a discussion about the lack of leadership for the city’s lead problem.

To me, it’s a lack of political will and that’s what we have to get around.

At the behest of Smith, whose Masten Council district is a lead hotspot, the Council passed a resolution asking the Health Department to halt exterior home inspections. Smith said he had fielded complaints from elderly residents and Realtors that the inspections program would gentrify neighborhoods and lower property values.

Smith said there was no reason to cite property owners for lead hazards at homes where children don’t live and that the program created a hardship for property owners who had to remedy the problems. He also claimed most lead poisoning comes from hazards inside homes.

A month later, the county health commissioner rebuked Smith and refused to stop the program.

“While lead poisoning is caused by the ingestion of dust most often contacted inside of homes, the dust most often originates outside the home,” Burstein wrote in a letter to Smith. “Regardless of whether the home is occupied by a child, the deteriorating paint will affect all children in the neighborhood.”

In April, more than 50 experts gathered in Buffalo for a conference on lead laws and policy. One of the chief conclusions among the attendees was that the cities like Buffalo that have lead problems need strong advocates who can effect change.

“To me, it’s a lack of political will and that’s what we have to get around. We have this don’t ask, don’t tell, cover your eyes and hope the problem goes away, and we have to stop that,” said Chachere, the staff attorney for the Northern Manhattan Improvement Corp., said at the April conference.

“And it’s very sad because it’s not rocket science,” he said.

“It’s a problem for housing inspectors, for law enforcement, for educators, for all parts of our society, so we need leadership from our public officials to really make a difference.”