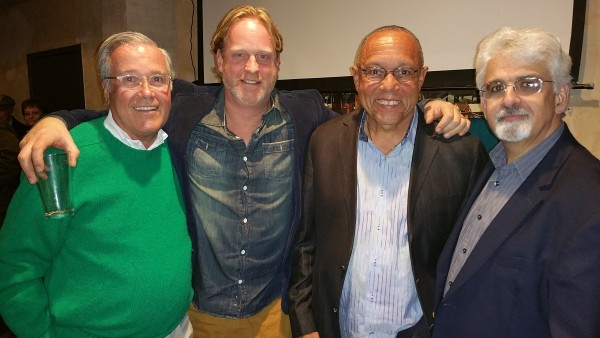 Has Buffalo really gotten its mojo back?

That was the question posed by Investigative Post Editor Jim Heaney during a panel discussion Tuesday at Allen Street Hardware attended by an overflow crowd of 80 people.

The panelists were Newell Nussbaumer, editorial director of Buffalo Rising, Rocco Termini, president of Signature Development, and Henry Taylor, professor and founding director of the Center for Urban Studies at the University at Buffalo.

They did agree that the Queen City has made strides, but most of its work still lies ahead, and not everybody is sharing in the recovery. Much of the night’s discussion centered around Buffalo’s struggling East Side and what can be done to ensure it isn’t left behind in the rebound.

Termini said that Buffalo is still in the infancy of regaining its mojo. He said real progress happens when a city is economically sustainable and doesn’t rely on subsidies to incentivize developers.

“Whether it is historic tax credits, whether it is brownfield tax credits, or it’s direct infusion of cash from the state of New York or some other governmental body, I think you get your mojo when you don’t need any of those subsidies,” said Termini.

Termini said Buffalo’s biggest challenge is boosting its low median annual income, pointing out that it is $14,000 less than Rochester’s.

“You really need to have more income in this city to get rents up so that you can start doing things without government subsidies. And I think when you start seeing that happen in Buffalo, then you really have your mojo back,” said Termini.

Listen to and read WBFO’s coverage of the event here

Nussbaumer has been covering Buffalo’s growth since Buffalo Rising’s launch in 2004. He said Buffalo is seeing more new businesses sprout up than he can cover.

Taylor rejected the premise of Buffalo getting its mojo “back,” arguing that Buffalo’s task is to identify the kind of city we want to build and create a new mojo from that vision.

“The template we should be aiming for is a just city. A city anchored around social, racial and economic justice. A city in which we are looking at prosperity and growth not as ends within themselves, but as a means of creating and building a new way of life,” said Taylor.

All three panelists agreed that one of the city’s greatest assets is the number of young people choosing to stay or move back to Buffalo.

The panel also agreed that the East Side is being left out of Buffalo’s resurgence. Taylor said more needs to be done to renovate the East Side without displacing residents.

He said that 88 percent of those vacancies today are not for sale or rent, instead being held for development.

Nussbaumer said he understands why residents of the East Side would be wary of outside groups developing in their area. He thinks that if the right conversation is struck “sensitively,” they could see the same kind of rehabilitation movement that is occurring on the West Side.

“The East Side is filled with opportunities. If you look at the East Side of Buffalo, it is mind-blowing. You have beautiful buildings and a lot of them are in jeopardy right now, which is so sad,” he said.

“And you’ve got beautiful neighborhoods, beautiful people who are trying to make a go of it, and they want to be welcoming, but they’re afraid that certain areas and certain properties are going to be bought up for the wrong reason.”

Taylor said a movement that works in favor of the East Side must grow organically from within the community.

“You do not want a West Side organization developing the East Side,” said Taylor. “You’ve got to build the capacity on the East Side in order to do that.”

Buffalo’s failing educational system was also seen by the panel as one of the city’s plights.

Termini said that until something can be done to improve the educational system, Buffalo will have no mojo. He said the failing system affects everybody, especially the poor. He called for radical change to Buffalo Public Schools, suggesting to throw away the current system and “start from zero.”

“These kids are not dumb kids, it’s just that they’re kids who have been educated by the Buffalo Public Schools that don’t prepare them for anything except McDonald’s,” Termini said.

“And that’s the big problem in Buffalo, and that’s one of the reasons why our median income is so low. We don’t prepare people for life after school.”

Termini wants to decentralize the schools, assigning four or five schools to each college in Western New York and having those colleges run the schools.

“Then you have an opportunity for all the students in these colleges to be mentors to these kids,” he said.

“And some of these kids really need mentors because there’s really a lack of guidance at home. Until we re-imagine our whole school system, we’re going nowhere, and I think that’s probably our biggest problem right now.”

Upcoming events include a luncheon Jan. 13 that will consider conditions on the city’s East Side, a trivia night Jan. 27 featuring Kevin O’Connell of WGRZ, and another happy hour discussion Feb. 10 on a topic yet to be determined. Tickets will go on sale soon.