Varsha Kraus and her family fled their neighborhood in Love Canal in 1981 only to learn two years ago that its toxic waste had been dug up and buried in a landfill behind their subdivision in North Tonawanda.

After insisting for 25 years that the closed landfill posed no significant health threat, state officials changed their minds in December and declared it a Superfund site.

But warning signs were evident all along: rusted chemical drums, battery casings stacked waist high and children getting burns from splashes of orange pond water.

Orange-tinted water one of several warning signs spotted at the landfill by residents for decades.

The Love Canal waste – enough to fill 80 dump trucks – has since been exhumed and shipped to out-of-state incinerators, but further tests show the landfill remains toxic. Yet the property is not fenced and lacks controls to keep contamination from spreading, which flouts guidance given to the state decades ago.

The situation has left current and former residents worried and wondering if any of the health problems they suffer from could have been caused by what was—and still is—buried near their homes. One resident compiled a list of at least 17 people in her immediate neighborhood who have been diagnosed with cancer over the years.

“It hurts, it’s devastating,” said a tearful Kraus, who, along with her daughter Sarah, battles a host of health problems.

“I don’t want to relive Love Canal, that was such an awful experience, and this brought it all back.”

The landfill is a stone’s throw away from homes in the City of North Tonawanda and Town of Wheatfield.

An Investigative Post review of more than 800 pages of studies and other public records shows that the state Department of Environmental Conservation did not follow through on minimum recommendations from its own sponsored report to protect the public.

“People have been poisoned and families have been wiped out, yet they have glossed over it and they won’t do proper testing,” said Mary DiPota, a neighbor of Kraus on Forbes Street.

Wilma Subra, a Louisiana-based Superfund expert who consults with citizens on environmental health issues, said the state did not go far enough to determine what, if any, impacts the contamination may have had on residents.

“State health officials should be very interested in this,” she said.

The Niagara Sanitation Co. landfill operated from 1964 to 1968, collecting municipal and industrial waste from plants including Carborundum Company, Bell Aerospace and Frontier Chemical.

Residents often complained about odors, exposed waste and unsafe conditions for children, such as holes filled with discolored water, according to Niagara County Health Department records. Homeowners wrote letters to the Town of Wheatfield as early as 1965 asking that the landfill be fenced.

Love Canal waste dug up during the construction of the LaSalle Expressway in Niagara Falls in the spring of 1968 eventually found its way to the landfill.

A sample analyzed by Hooker Chemical—then owners and operators of the Love Canal property—had an oily residue that “burned like a 4th of July sparkler,” according to internal memos released as part of a 1994 Love Canal federal lawsuit.

Listen to the radio version of this report produced for our partners at WBFO, 88.7FM.

Nonetheless, Niagara County health officials gave their consent to bury the waste in a trench at the landfill, just about the same time it stopped accepting waste of any kind. No steps were taken to fence the property or limit the migration of contaminants.

Since then, children have used the landfill as their sanctuary from chores and homework. They play and ride dirt bikes and ATVs there, while adults hike and walk dogs. This activity continues today.

“There was nothing ever stopping us from going back there,” Sarah Kraus recalled.

State authorities launched an emergency investigation after a Niagara Gazette report in 1982 exposed that the Love Canal waste had been buried at the landfill.

The notes of investigators from the summer of 1983 confirmed many of the warning signs residents saw for decades: orange water, chemical drums, exposed garbage and tires, and rust-tinted grass.

Wheatfield leaders at the time dismissed neighborhood concerns as hysteria and ignored calls for a fence around the property.

Reports commissioned by the DEC confirmed the precise location of the Love Canal waste, but concluded in 1989 that the site did not pose a significant threat to public health. Nevertheless, the report said the landfill should be remediated.

At a minimum, the report said the landfill needed a cap to contain the contaminants and a fence to restrict access. The cost was estimated at $2 million.

A spokesman for the DEC said the property did not qualify for any remediation program based on the information the agency had at the time. Therefore, no one took steps to restrict access. The DEC refused repeated requests for an interview to discuss the landfill in detail. 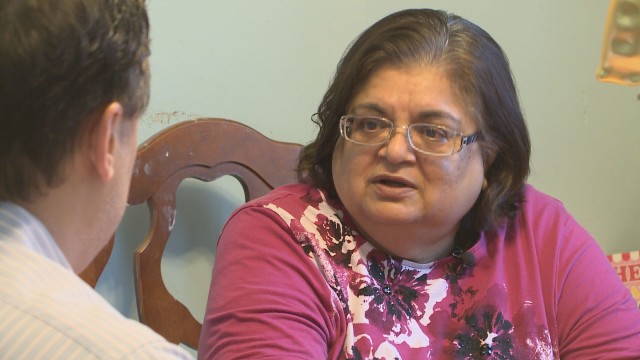 Varsha Kraus said she feels like she is living the nightmare of Love Canal all over again.

Experts and residents said that, at the very least, the property needs a fence to restrict trespassing. Numerous residents said illegal dumping continued for years.

“It’s money, politicians, and it’s totally criminal,” said Varsha Kraus. “No one took responsibility for it.”

Leaving the landfill unfenced exposed adults and children to dangers.

There are trails and a tree stand just feet away from where the Love Canal waste had been buried. Teenagers built fire pits, using chemical drums for seats. At least two children fell in the contaminated water and sustained burns on their legs, according to friends and Facebook posts.

Some of those same children now live with serious health problems.

Sarah Kraus said she does not go a day without getting sick. She has lumps all over her body and had a one-pound tumor removed from her stomach. She has inexplicable pain, bad knees, and constant headaches. And she’s only 38. 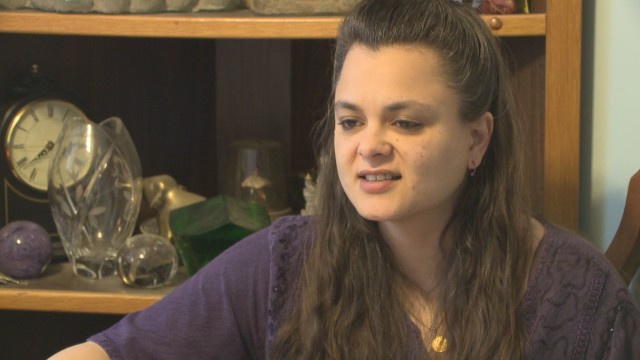 Sarah Kraus said she does not go a day without getting sick.

“I’ve suffered with health problems my entire life, not knowing really what it stems from,” she said.

Dipota, Kraus’ neighbor on Forbes Street, said her husband was diagnosed with cancer 15 years ago and the couple’s oldest son still suffers from bronchitis and severe allergies that she said have stumped doctors since he was a child.

“He has everything but cancer,” she said of her son. “He played back there and we had a vegetable garden and we have water that comes in our basement.”

Carl Krolczyk, who grew up on Forbes Street and played at the landfill as a child, said his father had stomach cancer.

“Both of our next-door neighbors had cancer. So I’m freaking out now,” he said.

Alexis Dietrich grew up on Forbes Street and moved away in 1993. She has lupus, her mother, leukemia, and her father, a rare skin disease. She also lost two family dogs to cancer.

Health officials have not conducted any studies to determine if there is a link between the illnesses and the chemicals found in the landfill. But Subra said the residents have reason to be concerned.

“[Government agencies] will say, ‘Well, you don’t have any proof there’s a cause and effect,’” Subra said.

“But, in fact, the chemicals are known to cause the health impacts that the people around the site are experiencing.”

In 2012, the DEC returned to the property for an assessment that prompted the agency last Dec. 15 to reverse its longstanding decision not to remediate the landfill.

Recent studies found the soil and groundwater was contaminated in the northeast section of the property. The contamination had spread underground towards Sawyer Creek.

The contaminants include a thick, dark-brown mixture of benzene, toluene and chlorinated benzenes that can cause cancer. Other contaminants in the soil and groundwater include pesticides, heavy metals and chemicals that can vaporize in the air.

Nearby homeowners have long complained about yards and basements flooding, but authorities never tested homes or installed groundwater wells outside the perimeter of the landfill to check for contamination.

That’s a potential problem, said Subra, the Superfund expert, if the chemicals migrated to nearby properties, vaporized and made their way into homes.

The DEC in 2014 convinced Glenn Springs Holdings, an affiliate of Occidental Chemical Corporation, to pay for the removal of the Love Canal waste.

The state’s studies pointed to other sections of the property west and south of the Love Canal waste that remain toxic, however.

For example, there are pesticides and more chemicals that can vaporize in the air. Even worse, one section less than a football field away from Forbes Street has enough PCB contamination to pose a significant threat to health, studies said.

There are hazardous amounts of lead in the soil in two other spots a similar distance from homes. Together, the contaminated soil would fill more than five Olympic-sized swimming pools.

This contaminated soil “may lead to exposure to high concentrations of these chemicals,” the report concludes, and “several trails run near or through this part of the site and may present an exposure risk.”

The results prompted the DEC to reclassify the site as a Superfund site last December, which means it poses a significant threat to the public.

Cliffe said the DEC is attempting to get companies that dumped their industrial waste at the landfill to help pay for the remediation.

In the meantime, he said, “I do caution that everyone stay away from this landfill, especially those on ATVs or motorbikes.”

But residents said the caution is not being heeded.

Laurie Galbo, who lives in a subdivision west of the dump, said she still sees ATV riders and motorbikers on the property.