Dan Telvock’s coverage of environmental issues – from lead poisoning in Buffalo to a toxic landfill in Wheatfield to water pollution at Gallagher Beach – has been recognized for excellence by the Society of Environmental Journalists.

Telvock placed second among 36 entries for outstanding beat reporting in a small market.

Here’s what the judge’s had to say about Telvock’s reporting:

Dan Telvock’s dogged reporting on water contamination and lead poisoning holds local officials accountable on behalf of Buffalo residents. His use of data showed that more children in Buffalo suffer from elevated levels of lead in their blood compared to surrounding communities, like Rochester, where officials take a more aggressive approach to combat lead poisoning. Another story highlights the lackadaisical response from officials to reports of odors, tainted water and unsafe conditions at a landfill site where Love Canal waste had been buried years ago. The community is fortunate to have such an investigative soul in its midst.

According to the Society of Environmental Journalists, the contest “is the world’s largest and most comprehensive awards for journalism on environmental topics.” 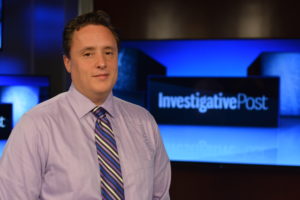 Investigative Post was the only news organization that covers environmental issues in New York State whose work was recognized in the competition. A complete list of winners and honorable mentions is here.

Telvock’s reporting, done in partnership with WGRZ, has been honored in a number of journalism contests since he joined Investigative Post four years ago, including Investigative Reporters & Editors and the New York State Associated Press Broadcasters Association.

“Dan digs deep as a reporter and consistently produces eye-opening stories that are a catalyst to change,” said Investigative Post Editor Jim Heaney.

Investigative Post is a nonprofit investigative reporting center based in Buffalo. Its environmental coverage is underwritten in part by the Community Foundation for Greater Buffalo.