The state Department of Environmental Conservation said Tuesday that its latest air monitoring program near the Peace Bridge shows the air people breathe in adjacent neighborhoods beset by high asthma rates is comparable to other similarly sized cities and high-traffic urban areas.

In fact, state environmental regulators said during the community meeting at the Porter Street Library in Buffalo that some of the air toxins they measured near the Peace Bridge were similar to what one might find near Whiteface Mountain in the Adirondacks.

Nonetheless, the DEC called on the federal Environmental Protection Agency to adopt stronger emission standards for diesel trucks and consider establishing standards to regulate a type of air pollution not yet monitored by the federal government.

The conclusions from the latest version of the DEC’s Peace Bridge air monitoring study, which took three years to complete, mirrored those from a study the agency finished in 2013. The DEC noted, however, that this new study was more comprehensive because it tested the air during all four seasons and measured for other types of air pollution and chemicals that the agency didn’t consider in its 2013 testing.

The DEC’s study did not address health impacts, although other independent studies conducted at the Peace Bridge made a strong link between Peace Bridge pollution, especially truck diesel fumes, and high asthma rates in the nearby neighborhood.

Do the results of the DEC’s study mean the air near the Peace Bridge, where 5.4 million cars, trucks and busses crossed last year, is safe?

“It meets the federal health-based standards, so yes,” was the response from Steven Flint, the DEC’s director of Division of Air Resources. 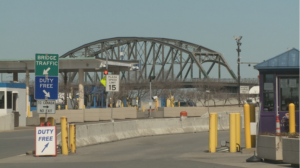 Some of the 50 community members who attended the meeting still had concerns about the air quality. They live in neighborhoods on the Lower West Side where asthma rates are almost four times the national average.

Nadejda Petrova, who lives near the Peace Bridge with her husband and toddler, asked a DEC official if he would let his children play often at Front Park, which abuts the bridge plaza.

“I think I would,” said Dirk Felton, a DEC research scientist who made the presentation to the community. “I mean, I think the air could be better. I’m not a health person, so I can’t answer your question precisely.”

“Would you buy a house in this neighborhood?” Petrova said.

“I work in Albany. I can’t answer that,” Felton said before a DEC public affairs specialist attempted to end the inquiries from an Investigative Post reporter and Petrova.

Kathy Mecca, a neighborhood activist and president of the Niagara Gateway Columbus Park Association, was frustrated that the DEC’s study did not discuss potential health impacts.

“I need to know if my environment is making myself and other residents sick,” she said after the meeting and watching Investigative Post’s report on WGRZ.  “If there’s nothing to hide, why can’t they just tell us and why does a DEC public relations employee need to censor our right to know?”

DEC officials said they will send the results of their study to the EPA with the hope that federal regulators can use the information to develop new air quality and truck emission standards. They warned, however, that the federal review of the standards could take more than five years to complete.

In addition to this report, read last week’s story about how the DEC refused to release the air monitoring study to residents and Investigative Post prior to Tuesday’s community meeting.