A threat to Scajaquada Creek – and neighbors

It’s not the view from Virginia Golden’s front porch of the former General Motors plant that bothers her.

Neighborhood residents have been waiting – and worrying – for a decade since state environmental regulators declared several acres of the plant on East Delavan Avenue a significant threat to public health. The contaminant of concern are PCBs – so toxic that the federal government banned the manufacturing of them in 1979.

The residents want the property cleaned up, but have instead endured inaction from state regulators and legal maneuvering by the plant’s changing cast of owners. Those caught in the middle of the dispute include 25,500 mostly African-American neighbors who live within a 1-mile radius of the plant.

“We have nowhere to go, we’re poor people,” said Golden, who lives on Northumberland Avenue. Neighbors, working with the Clean Air Coalition of Western New York, are now pressing the state Department of Environmental Conservation to end its tug of war with the property’s current owner, Jon Williams and his East Delavan Properties LLC.

Clean Air Coalition organizer Brian Borncamp said the DEC is putting the interests of the property owner over the Delavan-Grider community.

“This site has been leaking hazardous waste for decades, and fulfillment of the state’s responsibility is past due,” Borncamp said.

The DEC has failed to use its authority to require a clean up, and it has not spent any of the $2.8 million earmarked for the remediation. The agency is now signaling it will get tough with Williams’s company, declaring in a March 29 letter that the company has not “performed sufficient monitoring during the course of its many years of ownership to ensure stabilization of known hazardous wastes/substances at the site.”

Williams counters that the contamination is not his doing. The PCBs are remnants of the era when General Motors owned the plant. Although he’s willing to remediate, he and the DEC cannot agree on how.

The health concerns extend beyond the immediate neighborhood.

State records show PCBs have penetrated a brick sewer that runs below the property. Heavy rain can cause this sewer to empty into the badly polluted Scajaquada Creek and testing has detected PCBs in the waterway’s bed at levels harmful to fish and other wildlife.

But it’s uncertain whether any of the PCBs in the creek come from the plant. Martin Brand, DEC’s deputy commissioner, said the agency needs “a comprehensive and detailed investigation of the current conditions at the facility” to determine the condition of the sewer and property.

The former GM plant at 1001 East Delavan Ave. is one of almost 400 contaminated sites in New York State that contain PCBs. This plant is one of two properties on Buffalo’s East Side that the DEC deems a significant threat to public health. The other site is Vibratech, a mile west on East Delavan Avenue, which contains toxic solvents.

The GM plant opened in 1922, the first Chevrolet automobile production facility outside of Michigan. The plant was a huge East Side employer in its heyday. Workers used a lot of oil and lubricants laced with PCBs, which do not break down, even under high temperatures.

That was good for industry but terrible for the environment. In 1991, GM reported a spill to the DEC that led to the discovery of PCBs in oil beneath one of its manufacturing buildings. Three years later, GM found PCBs had leaked into a brick sewer line beneath the facility that feeds into Scajaquada Creek when the system is swamped by rain.

The spill prompted testing that found PCBs in high-enough concentrations to be deemed hazardous waste. That discovery prompted GM to install a treatment system for the underground contamination.

In 1994, GM sold the facility to American Axle, which manufactured automobile parts. In 2006, GM agreed to remediate the property through a legal order with the state. Then, in 2008, East Delavan Properties bought the plant.

“You had these hundred-year-old production facilities that were essentially covered in cutting oil,” he said.

GM’s legal obligation to remediate the property ended in 2012, however. The company filed for bankruptcy several years earlier and subsequently negotiated a settlement with the state that absolved GM’s of its liability in exchange for $2.8 million. That money was earmarked for remediation of the plant, which would cost an estimated $10 million. 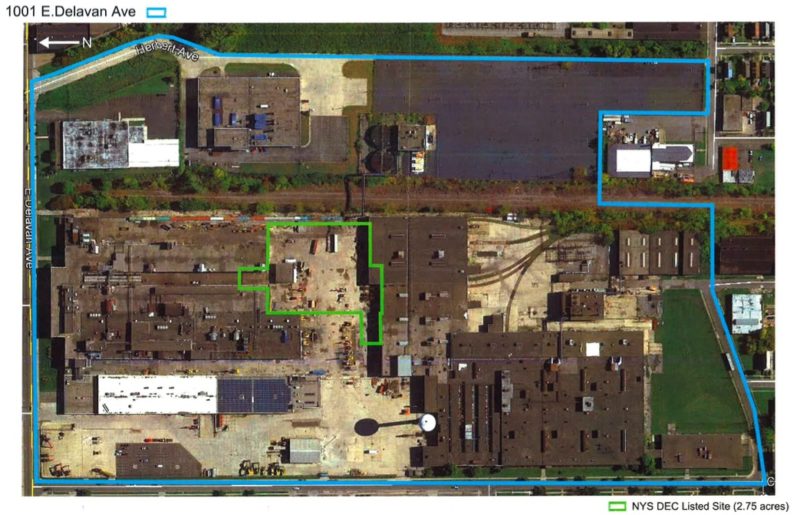 “I’m not going to take responsibility for what GM did here forever,” he said.

“We understand that East Delavan bought this property when GM was starting to go into the bankruptcy, but they did have their eyes open when they bought it, and they knew what they were buying,” said Brand, DEC’s deputy commissioner.

Williams said he is willing to remediate the property, but he doesn’t want to be held liable for the contamination.

The state is not agreeable to that condition and has instead issued an ultimatum: remediate under the Superfund program or the state will do so and take his company to court if necessary to recover the costs.

Meanwhile, Williams’s company has one of his other businesses, OSC Manufacturing and Equipment Services, on site. The company makes and sells heavy construction equipment.

Williams has also leased space to at least four other companies and sold a portion of the property to Niagara Lubricants, which relocated there after a fire destroyed its Black Rock factory. His plans include the expansion of his company to build diesel-free construction equipment and become a major employer in a neighborhood that is hungry for jobs.

The PCBs pose a potential danger beyond the plant site.

Studies have found PCB-laced oil leached through a brick sewer below the property. This sewer feeds into lines that eventually empty into Scajaquada Creek in Forest Lawn Cemetery when the system is inundated with runoff during storms.

This happens often: Buffalo Sewer Authority documents show up to 270 million gallons of untreated sewage and stormwater flow into the creek from a tunnel in Forest Lawn Cemetery up to 65 times a year.

DEC photos from 2000 and 2001 show oil laced with PCBs coated the walls of the sewer beneath the plant.

Studies prepared for GM in 2009 concluded that the oil plume underground was not a human health risk and that the PCBs entering the sewer had a negligible impact on the creek.

But a 2014 study by the U.S. Army Corps of Engineers found unsafe concentrations of toxic chemicals, including PCBs in the creek. Seven spots within Forest Lawn Cemetery tested at levels deemed “likely harmful” to fish, birds, and other wildlife. People who regularly eat contaminated fish can develop serious health problems, including liver disease, high blood pressure, even cancer.

The Army Corps’ study did not identify any sources of the PCB contamination. DEC officials don’t know if PCBs underneath the plant continue to leach into the brick sewer.

“I think we need to answer those questions,” said Brand of the DEC.

“Certainly, when we find it, we definitely need to take action to remove it from the system,” she said.

That sentiment is shared by East Side residents living near the plant. They want the stalemate between the state and East Delavan Properties to end.

“No more talking, no more meeting, just clean the land up so that I can go on about my day,” said Gregory Glover, who has lived in a home behind the plant for 32 years.