Bringing IBM to Buffalo was meant to create good-paying jobs and develop a technology hub downtown.

Three years ago, Gov. Andrew Cuomo announced that the state would spend $55 million on equipment and office space for the company to set up a “center for cutting-edge software development.” In exchange, IBM and its partners agreed to create 500 jobs over five years.

State officials made the point over and over: these would be good-paying, high-tech jobs.

But many of the employees in IBM’s Buffalo office, at least so far, are working in low-skilled, relatively low-paying, call center jobs.

Most of them don’t actually work for IBM, but are employed by staffing agencies or subcontractors. They make less than IBM employees, receive less generous benefits and have far less opportunity for promotion, according to seven current and former IBM employees and contractors who asked not to be named for fear of retaliation.

Many of these help desk workers are employed by the staffing agency Career Connection Inc.

One former employee described working for CCI as a “dead end job.”

Another made $14.25 an hour, eventually quitting in frustration after a promised promotion never materialised.

A third said he filed a complaint with the state Department of Labor over the company’s restrictive policy on unscheduled breaks, like bathroom breaks, arguing that it did not accommodate his medical needs.

“When public dollars are spent, the jobs that are created should be stable, pay decently, and have benefits – they should have the things people need to live,” said Kirk Laubenstein, executive director of the Coalition for Economic Justice, a local labor group.

“If IBM were allowed to count temporary, subcontracted employees, I would view that as a deficit in the rules,” he said.

Currently, 165 people work in IBM’s Buffalo office, according to a state spokesperson. How many of those are help desk workers is unclear. It’s also uncertain how many of the 500 jobs the company and its partners have agreed to create will be the high-tech, high-paying positions Cuomo described.

For all the talk of “high-tech jobs,” state officials concede that their agreement with IBM does not require the company to create any particular types of jobs, specifying only the overall headcount.

A year after the company began ramping up operations in Buffalo, it’s hard to tell what other kinds of work IBM is doing. Executives here and downstate refused to comment, ignoring repeated phone calls, emails and in-person visits from Investigative Post. State economic development officials declined interview requests and provided only limited information.

This much is certain: state taxpayers are actually paying for some of these jobs twice over.

On top of the Buffalo Billion funding, IBM has a five-year state contract worth $57 million to provide a 24/7 IT help desk for state agencies, part of an outsourcing push that reassigns some work previously done by state employees. The contract covers basic IT troubleshooting, like helping state employees reset their passwords over the phone. 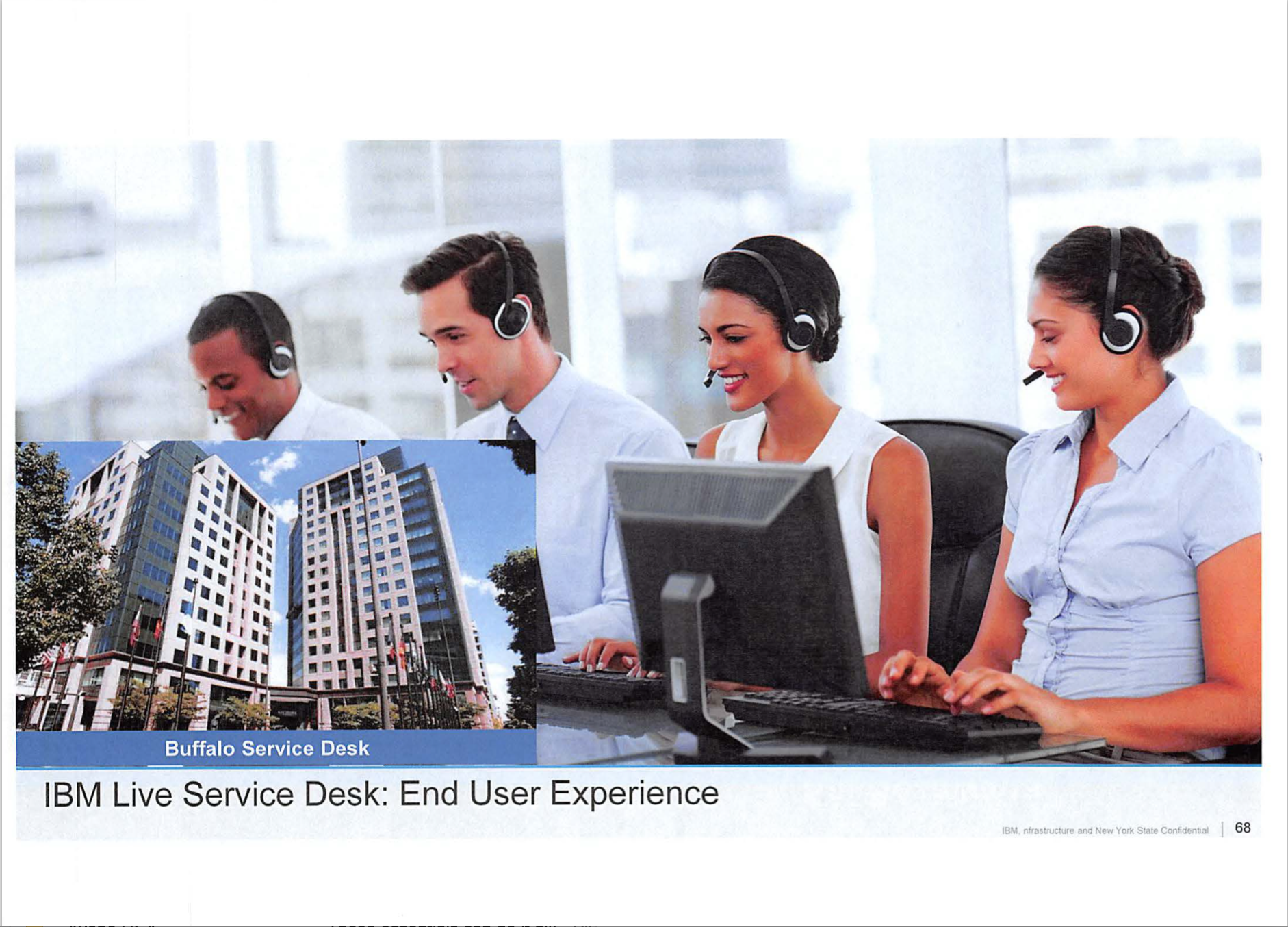 A slide from IBM’s presentation to the state Office of Information Technology Services, part of the company’s bid for the help desk contract.

At least two of the six floors the company occupies in KeyCenter’s South Tower are dedicated to help desk work: one for the New York State contract, and one for health insurance company Anthem.

Help desk jobs are “not good economic development for wage and benefit levels,” said LeRoy of Good Jobs First. “It’s not like there’s a career path there and there’s not a lot of economic spin-off effect.”

The governor justified spending $55 million on the IBM project – officially the “Buffalo IT Innovation and Commercialization Hub” – by saying that bringing a major technology company to town would boost the region’s modest high-tech sector. Back office and call center jobs, by contrast, abound in Western New York.

A memo to Empire State Development’s board of directors as they prepared to sign off on the $55 million grant said the jobs created would “typically pay” more than $70,000.

Some of the jobs IBM has created so far pay less than half of that, according to interviews with former employees and a review of job postings.

“IBM will put an emphasis on recruiting software engineers and researcher graduates from WNY-area colleges & universities,” the memo continued.

One recent advertisement for help desk positions, by contrast, calls for “high school diploma or equivalent experience.” Another notes, “call center experience a plus.” Others ask for an associate’s degree in IT, or a four-year degree in any subject.

Hourly wages for these help desk jobs range from $14.25 to $18.16, depending on the IBM subcontractor and time of hiring, according to job postings and interviews.

Employees also receive no paid time off for their first year at CCI, according to the company handbook for Buffalo employees.

The nature of the work means that any time employees spend not taking calls is closely monitored.

“Due to the call center environment … your start times, breaks, and lunches will all be scheduled,” the handbook notes.

“If you’re not on the phone, in the correct code, ready to take calls, you’re not getting paid,” one former employee said. “They nickel and dime you to death.”

Another former employee, whose medical condition required him to use the bathroom frequently, filed a complaint with the state Department of Labor, arguing that the policy did not accommodate his medical needs. The DOL told him he would be repaid the money that had been taken out of his wages, he said.

Career Connection Inc. did not respond to repeated requests for comment.

The two other companies that provide help desk workers for IBM, Albany-based IT company nfrastructure and staffing agency Kelly Services, have different benefits packages and pay slightly more than CCI, former CCI employees said. nfrastructure employees accrue paid time off at twice the rate CCI employees do, according to information provided by an nfrastructure representative.

IBM employees, meanwhile, make more money and receive more generous benefits than contractors. They also tend to do more specialised work, like remotely taking over a computer for troubleshooting instead of simply explaining over the phone how to fix a problem.

Bidding for the state help desk contract, IBM officials made the same point over and over: if they got the work, they would bring jobs to Buffalo.

“This will provide economic development for New York, make no mistake,” one IBM executive said at a meeting where the company made its pitch to the state Office of Information Technology Services. “This is a service desk for New York, in New York, staffed by New Yorkers.” A slide from IBM’s presentation to the state Office of Information Technology Services.

IBM would need 130 people to staff the help desk in Buffalo, executives said, which would “support strategic economic development” that is “aligned with the Governor’s goals for long-term economic growth.”

Many of the help desk jobs in Buffalo, however, were previously done by state employees, casting doubt on whether they are all “new jobs.”

Since IBM began work on the contract last fall, some of the more specialized work has been returned to state employees.

The IBM hub is one of the three major Buffalo Billion projects, along with the $750 million solar panel factory for Tesla in South Buffalo and $50 million for lab space on the medical campus for biotech company Albany Molecular Research Inc. Unlike Tesla, which pays only nominal rent to the state, IBM pays market-rate rent for its office space in KeyCenter’s South Tower. The building had been left almost completely empty after Delaware North moved to its new headquarters at the end of 2015.

As well as creating 500 jobs in Buffalo, IBM agreed to retain 3,100 employees elsewhere in the state.

The Buffalo Billion aimed to seed high-tech industries that the region lacked, kick-starting growth through massive state investments in selected companies. Back office and call center work, however, is already a well-established part of the Western New York economy – in many cases without public investment.

If you’ve worked at IBM’s Buffalo office, we’d like to hear from you. You can reach reporter Charlotte Keith on 716-831-2626 x 4 or send her an email at ckeith@investigativepost.org.