If you follow local politics, and bless your heart if you do, you might have heard about a poll showing incumbent Erie County Executive Mark Poloncarz in a statistical tie with his challenger, Erie County Legislator Lynne Dixon.

The race might be that close. It might not be. Whatever the mood of the electorate, that poll wasn’t designed to measure it. It was, rather, a “push poll,” which is a marketing technique intended to disseminate information, negative or positive, to a target audience.

In this case, the poll was meant to spread some unflattering— and not entirely accurate — talking points about Poloncarz and his administration to prospective voters in November’s general election.

Earlier this month, Dixon’s campaign commissioned a poll by a Kansas City, Mo., firm called Co/Efficient. The company’s website does not list previous clients, nor did the company respond immediately to an inquiry from Investigative Post.

The Dixon campaign then shared the poll with The Buffalo News. The paper’s political reporter, Bob McCarthy, made the poll the subject of an article published in the Sunday, June 16 paper.

Under state election law, when a political campaign makes public reference to a poll it has conducted or commissioned, it is obligated to make public the details of the poll within 48 hours of that reference. (Otherwise, campaigns could use specious or even nonexistent polls to promote their candidates or attack their opponents. Think of Donald Trump prefacing a claim with “Lots of people say…”) Among the information that must be filed: What questions were asked — their precise wording — and in what order? Was the poll conducted by phone or by other means? Who conducted it? Who paid for it?

The Dixon campaign filed the poll with the New York State Board of Elections in a letter dated Monday, June 17. The campaign also sent a summary of the poll to Investigative Post, at our request, on Tuesday afternoon.

But what the Dixon campaign filed with the state and shared with Investigative Post does not comport with what some who took the poll describe.

What those who took part in the robocall describe is a “push poll,” so-called because it pushes out information a campaign wants voters to know about, in the hope that the information will push a voter’s support from one candidate to another.

That information is built into the questions that are asked. And in the case of the Dixon’s campaign’s push poll, the questions that potential voters were asked depended on how they answered its top-line question: If the election were held today, who would you vote for?

The three respondents who spoke to Investigative Post are Democrats and Poloncarz supporters. This makes them biased, of course, but it also means that their responses to the automated phone survey led them into push poll territory.

When these respondents indicated that they would vote for Poloncarz, they were then asked if their position would change if they knew Poloncarz had hired a rapist to head the county’s Department of Social Services.

This is a reference to Al Dirschberger, the former Department of Social Services commissioner who was sentenced to five years in prison for raping an employee during a work trip to Albany in January 2017. When his office learned Albany police were investigating, Poloncarz first launched an internal investigation and, within a week, forced Dirschberger to resign. The victim has filed a civil suit against Erie County and the Department of Social Services.

Back to the push poll.

The primary point of the question about Dirschberger is to plant information: Mark Poloncarz hired a rapist.

The secondary point is to box the respondent into a visceral response: No, of course I don’t approve of hiring rapists.

The third and least important point is the respondent’s answer. If the question makes a respondent pause, mission accomplished: Negative message disseminated, doubt sown. If a respondent affirms support for Poloncarz anyway, no harm done: The respondent’s vote probably wasn’t up for grabs anyway.

The fourth point is to give a campaign that’s behind — because it lacks traction on policy issues, or the candidate lacks name recognition, or fundraising is lagging — something to talk about in the media: Look, we’re doing better than you thought. Or, Look, he may be ahead but our poll says people don’t really like the guy. Or, simply, Hey, remember when Poloncarz hired a guy who went to prison for rape?

When the region’s leading daily paper presents the poll without closely analyzing its legitimacy and calling it what it is, it gives the campaign fodder to disseminate stuff like this on Twitter: 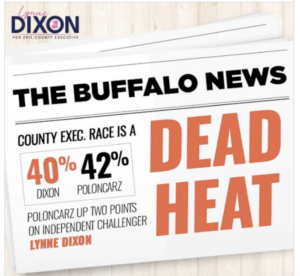 Dixon, an Erie County legislator and former television reporter, is a member of the Independence party; she is running on the Republican and Conservative party lines as well. Poloncarz, the incumbent, is a Democrat. He is also running on the Working Families Party line. As a challenger to a largely uncontroversial, two-term incumbent in a county where registered Democrats outnumber registered Republicans nearly two to one, Dixon starts the race as an underdog. And so she must attack her opponent in order to erode support among his base.

The respondents who spoke to Investigative Post say that, in addition to the Dirschberger reference, they were asked if they’d reconsider their support for Poloncarz if they knew he’d raised taxes, wasn’t spending money on road repairs, and wanted to charge Erie County residents for using plastic bags at the grocery store.

Those claims are not wholly accurate, but that doesn’t matter: A push poll is designed to sell, or to damage, not to illuminate.

Only the plastic bags question was included in the poll summary filed with the state Board of Elections and provided to Investigative Post by the Dixon campaign, via its principal consultant, Big Dog Strategies, the firm run by Chris Grant, former chief of staff to Congressman Chris Collins.

And why would they? This push poll was a success: It got the candidate who paid for it a story in the Sunday paper, while quietly tipping a little poison into the well. No doubt the Dixon campaign has moved on to its next gambit.