Buffalo’s No. 2 cop is moonlighting

Joseph Gramaglia is the number two guy at the Buffalo Police Department, second only to the department’s titular head, Commissioner Byron C. Lockwood.

That’s no 40-hour-per-week job. With more than 800 employees, Buffalo’s is the second-largest police department in the state. It’s a department that is making do with equipment shortages, introducing new taser and body camera programs, coping with overtime costs, and dealing with a series of police shootings that have strained community relations, especially with communities of color where police presence is felt most acutely. 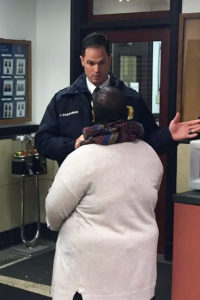 And yet Gramaglia — who, on behalf of Lockwood, manages day-to-day operations, strategic planning, ongoing union negotiations, and intergovernmental relations, among other tasks — finds time to moonlight as “officer in charge” for the Village of Blasdell’s police department.

It’s a situation that evokes some grumbling among rank-and-file officers, but which virtually no one will criticize publicly.

A police spokesman, Captain Jeffrey Rinaldo, confirmed that Gramaglia has been wearing both hats for a long time, with written permission from Lockwood — permission that was renewed annually by the two commissioners who preceded Lockwood, Daniel Derenda and H. McCarthy Gipson.

Rinaldo said that Gramaglia’s Blasdell job has never interfered with his work for the Buffalo Police Department. (“I’ve never seen him run out of headquarters to get down to Blasdell,” Rinaldo said.) And the chair of the Common Council’s Police Oversight Committee — Niagara District Councilman David Rivera, a retired police officer — agrees that’s probably true in the case of Gramaglia, who Rivera praised as “a rising star” in the department.

But Rivera has some concerns.

“This is an administrative job that requires you to be available at almost any hour,” Rivera said in a phone interview. “To me it makes absolutely no sense. If I were commissioner, and I was paying a lot of money to someone, a member of my command staff, I’d want to make sure that they were present, fully engaged and available, and not potentially conflicted by the demands of other employment.”

In 2018, Gramaglia earned $117,326 from the Buffalo Police Department, according to state payroll records, while simultaneously collecting $35,308 from the Village of Blasdell, which also pays $75 toward his cellphone bill.

Gramaglia has worked in Blasdell’s police department since at least 2009, when he collected a part-time salary of $11,113.

When Mayor Byron Brown made Lockwood police commissioner in 2018, Lockwood brought Gramaglia onto his command staff as chief operations officer.

Lockwood rarely acts as the public face of the department; that job belongs to Rinaldo. The nuts-and-bolts administrative duties are delegated to Gramaglia.

When the department met in executive session with the Common Council this summer to discuss a police union grievance related to the assignment of detectives on overnight shifts, it was Gramaglia, not Lockwood, who represented the department and explained the personnel issues to Council members.

When there are incidents or events that precipitate a large police presence — a demonstration in Niagara Square, for example, or violence between an officer and a citizen — Gramaglia is far more likely to be present than Lockwood.

In Blasdell, meanwhile, Gramaglia’s job is largely administrative. According to the village’s administrator, Janet Plarr, Gramaglia spends 10 to 12 hours per week in person at Blasdell’s village hall, “mostly on nights and weekends.” He’s in charge of the police budget, training requirements and scheduling patrols. He reports on police matters to the village’s trustees.

Most of the Blasdell cops Gramaglia oversees are part-timers who work full-time law enforcement jobs with other municipalities, as well: Buffalo, Lackawanna, Hamburg, Eden, Brant, Erie County, Gowanda, and elsewhere. Three of Blasdell’s 22 patrol officers also work for the Town of Evans, for example, and one of Blasdell’s three detectives is also an Orchard Park police officer.

That’s not uncommon for small-town police departments, Plarr told Investigative Post. It saves a village like Blasdell the cost of insurance and benefits, which are paid by an officer’s full-time employer, while allowing the municipality control over how it is policed.

(Many years ago, Plarr told Investigative Post, Blasdell tried eliminating its police department because its cost threatened to bankrupt the village. The village contracted with the Erie County Sheriff to provide patrols instead, with what Plarr describes as wholly unsatisfactory results. There was always a sheriff’s patrol car present in the village, Plarr said, “but there wasn’t necessarily always a sheriff’s deputy in the car.”)

Staffing the village’s department with veterans from other municipalities also allows Blasdell to hire officers, like Gramaglia, with experience and acumen that its pay scale might not otherwise afford.

“We’re lucky to have him,” Plarr said.

Buffalo’s City Charter discourages, and in some cases prohibits, full-time employees from taking on second jobs that might interfere with giving “the whole of their time and attention” to their work for the city:

All officers, deputies and employees of the City, except those a part of whose time only is employed by the City, shall give the whole of their time and attention to the performances of the duties of their office or employment during the hours of such employment as fixed by ordinance; and such officers, deputies or employees shall not, after or before such hours, regularly engage in any other business, work or employment without the consent of the head of the department in which they are respectively employed, except as is otherwise provided by law.

“A violation of this article,” the statute continues, “shall be sufficient cause for the removal from his office or position of a person committing such violation.”

It is not uncommon for police officers, in Buffalo and other municipalities, to work second jobs, often as security guards. Some jobs are prohibited. Since 2014, for example, Buffalo police have been forbidden to work security at bars — the result of an incident in which an off-duty Buffalo police officer, working as a bouncer for the bar, was involved in the death of a patron at Molly’s Pub on Main Street near the University at Buffalo’s South Campus.

Rinaldo, the police spokesman, runs a successful private investigation and security firm with his wife — Buffalo Protection and Investigations, Inc. Among the company’s high-profile contracts are security at Canalside and New Era Field, and many of its employees are current law enforcement officers, including Buffalo police officers.

But those moonlighting officers are not typically members of the department’s command staff. Neither is Rinaldo.

Asked how much time Gramaglia spends on his Blasdell job, Rinaldo said, “I don’t know off the top of my head. But our policy prohibits people from spending more than 20 hours per week in outside employment.”

Plarr said Gramaglia spends 10 to 12 hours per week in person at his Blasdell job, but that’s not documented. Nor are any hours he spends working on Blasdell-related tasks when he’s not present at the village hall.

In the course of ongoing contract negotiations this summer, Buffalo’s police union tried this year to get the city to relax the 20-hour-per-week limit on second jobs. If Gramaglia spends more time than that on his Blasdell job, the head of the union told Investigative Post, “he’s a hypocrite.”

According to Rinaldo, the commissioner signed 85 approvals of outside employment this year. That’s less than half the number signed the previous year. The number is down because retirements are up, Rinaldo said: Older cops with second jobs have left the force, and the new hires replacing them typically don’t work second jobs while they’re on probation.

The new hires are meant to cut down on overtime for Buffalo police, which may explain why some rank-and-file officers take exception to Gramaglia’s Blasdell job: The deputy commissioner is charged with cutting the overtime hours that officers covet, thus reducing their take-home pay, but he gets to keep his lucrative side gig.

Rinaldo insists that the bottom line for the department is that Gramaglia is performing his duties in Buffalo.

“His outside employment has never been an issue for our agency,” Rinaldo said. “It’s never interfered with his duties or his responsibilities here.”

A dispatcher who directed one call to Blasdell village hall said it was likely that no one would answer the phone. “It’s a part-time/full-time department,” he said, echoing what the village administrator told Investigative Post. “There’s not always someone there to answer the phone.”

The dispatcher, in fact, works for the Town of Hamburg, which handles 911 calls for the Village of Blasdell’s police and fire departments.

The dispatcher was correct: On the majority of occasions that Investigative Post called Blasell’s police department, nobody answered. Instead, we got a voicemail message read by Gramaglia instructing callers who to call for a police or accident report, or to get an impounded vehicle released — or, if what you need is a police officer, the number for the Town of Hamburg emergency dispatcher.

The demands of the job

Rivera, the chairman of the Council’s Police Oversight Committee, described Gramaglia in a statement as “one of the most responsive and accessible police officers in the department.”

And Gramaglia developed a good reputation during his two-year tenure as B District chief, including as a presence at events and demonstrations downtown, where he showed an aptitude for keeping relations between police and citizens non-confrontational. When he was promoted to deputy commissioner in May 2018, the Allentown Association praised his “availability and responsiveness” in addressing neighborhood concerns.

He also has a reputation for being ambitious and political.

Check out our upcoming event featuring talk by Spotlight reporter

In recent years, Gramaglia and his wife personally have donated $2,010 to Brown’s campaign committee, according to campaign finance records. The August 2017 cocktail party yielded around $15,000 for Brown a month before the Democratic primary, in which Brown handily defeated then Buffalo Comptroller Mark Schroeder.

Brown was elected to his fourth term that November. The mayor named Lockwood his new police commissioner to replace the retiring Daniel Derenda in February 2018, and Gramaglia was promoted to deputy commissioner three months later.

“I’d like to review the Buffalo Police Department’s policy on outside employment for its command staff and will bring this issue up at the Council’s next Police Oversight Committee meeting,” Rivera, the chairman of the Common Council’s Police oversight Committee, said in an email statement to Investigative Post.

“Personally, Deputy Commissioner Gramaglia has been one of the most responsive and accessible police officers in the Department, so I cannot imagine it has been an issue for him, the Department, or the public,” Rivera told Investigative Post. “But, as a matter of good policy, we should look at whether outside employment is an issue for the command staff, considering these positions do have an inherit role of needing to be accessible at various hours of the day due to the nature of the job.”

Rivera did not, in fact, raise the issue at the last meeting of the Police Oversight Committee, which took place in June. The committee’s next meeting has not yet been scheduled but is expected to occur in January.