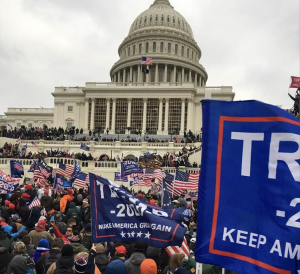 Western New York is home to a number of radical-right organizations that are active on social media. Of late they’ve been posting on the inauguration of Joseph Biden as president. Before that they shared conspiracy theories about the Jan. 6 assault on the Capitol — antifa did it! — and to express their support for Donald Trump.

An Investigative Post review of the right’s social media activity also found that a wide range of right-wing organizations have started to consolidate and coordinate their activities since the summer under the banner of “FREE New York.”

Their causes range from COVID — they don’t like wearing masks or the prospect of vaccines — to the 2020 presidential election — they don’t like the results — to efforts by social media companies to remove disinformation and hate speech from their platforms.

Members of radical right groups expressed their mourning over Biden’s inauguration on Jan. 20.

“This is going to be hell… buckle up, because our fight is far from over,” Nancie Orticelli, founder of The Constitutional Coalition of NYS, posted on Facebook.

Rus and Jul Thompson, founders of TEA New York, posted a letter for their followers through their “Monty’s Blog.”

“Some people may love Trump a little more than Jesus, and his departure off the Presidential dais feels like the death of a dear family member or friend,” they wrote.

“All we see is the loss of our Constitutional Republic and a 2-tiered justice system already in hyper-drive.”

Right wing radicals turned up the rhetorical heat even before the takeover of the Capitol on Jan. 6. Typical was this comment posted on Dec. 22 on Facebook by the account Liberty Watchmen, an account affiliated with the group New York Watchmen, in response to a since deleted post.

“Yeah you better be careful if you encounter us. We’re done with your bullshit. Armed, you don’t want to find out. Dangerous, only to the commies trying to take our country!” 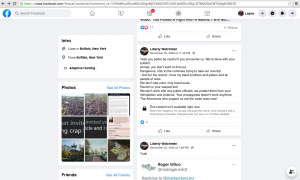 Radical right organizations are using social media to communicate and recruit in Western New York, as they have across the nation.

“All these people have been working together for years and now with the stamp of President Trump, it’s really allowed them to attract a whole new range of people,” said Heidi Jones, a Buffalo attorney who researches right-wing organizations.

There are several leading radical right organizations in the area.

Rus and Jul Thompson started “TEA New York” a decade ago. The organization is critical of what it considers abuses by state government and attacks on constitutional rights. Posts on their Facebook account typically target President Biden, Gov. Andrew Cuomo and the Democratic Party.

Jul Thompson organized a bus trip taken by more than 100 people to participate in a Trump rally in Washington, D.C., on Jan. 6 that culminated in the storming of the Capitol building. 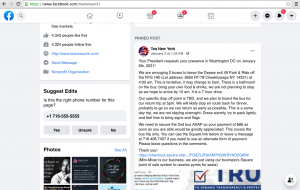 Rus and Jul Thompson promoted a bus trip to the Capitol on Facebook.

Rus Thompson, although not in attendance himself, posted “The Capitol building has been breached but by who? Us or antifa?,” during the events of Jan. 6 shortly followed by “Jul got hit with pepper spray.”

Michael and Desiree Segool started the Rolling Patriots and the Marching Patriots. These groups have staged numerous protests against government efforts to curb the transmission of COVID-19, including picketing the homes of Erie County Executive Mark Poloncarz and county Health Commissioner Gale Burstein.

Pete Harding is a member of the Patriots, among other groups. Harding faces multiple criminal charges on allegations he participated in the storming of the Capitol. A video shows Harding appearing to start a fire on top of a pile of seized  television equipment, something he called a “symbolic gesture.”

Rus Thompson insisted that Harding was not among those who traveled on the bus his organization booked for the trip to Washington.

“I have no idea what others from Buffalo may have done. I am hearing stories of one guy breaking up media equipment live on ABC news. He was NOT a passenger on either bus,” Rus Thompson said on Facebook.

Many members of the Rolling and Marching Patriots are also affiliated with New York Watchmen, a group started by Charles Pellien.

Pellien is a longtime friend of conservative political operative Michael Caputo, who served a tumultuous five months last year as assistant secretary for public affairs in Trump’s Department of Health and Human Services. Caputo — who worked on Trump’s 2016 presidential campaign and Carl Paladino’s 2010 gubernatorial campaign — has promoted the organization, and Watchmen members rallied at Caputo’s East Aurora home the evening of the D.C. riot.

The private Facebook group for the Watchmen, “New York Friends,” has more than 500 members. They claim the benefits of joining their group are shared knowledge of laws and weapons, strength and safety in numbers, self-defense training and brotherhood and sisterhood. 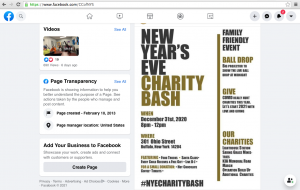 The Constitutional Coalition of NYS posted this flyer to promote their New Years Eve event.

Members of all groups appeared to get together for a New Year’s Eve fundraiser bash organized by the Orticellis. The party was held at 301 Ohio Street, owned by Carl Paladino’s Ellicott Development, which employs Nick Orticelli.

The Constitutional Coalition encouraged other affiliated groups to join FREE NYS in a Dec. 17, 2020, post.

“Attention! If you run a Facebook page or you are part of an organization that is geared towards liberty and the constitution and freedom, go over to freenys.com all groups are uniting under that platform.”

They say their focus is to free New York State from political, medical and social oppression, provide information about those issues and recruit those who want to get involved to fight for freedom.

Typical content from this umbrella organization’s social media includes the promotion of the Patriot’s events, articles on Cuomo and images mocking those wearing masks and getting the COVID vaccine.

Members of these groups love memes. Their pages are filled with comedic images about antifa, Biden, Cuomo and Dr. Anthony Fauci. 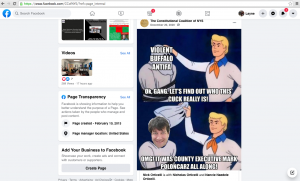 The Constitutional Coalition of NYS posted this meme on Dec. 20.

Many were vocal about the Capitol riot and faulted police for their response to the storming of the building.

“Looks like DC Police are pissed off tonight. where were they during antifa and BLM riots?,” Rus Thompson posted on Facebook the night of Jan, 6.

Observers have noted the difference in arrests, police presence and aggressive tactics during the protests last summer. Only 69 arrests were made Jan. 6, compared to 289 arrests on June 1, 2020, during Black Lives Matter protests in D.C. following George Floyd’s death, according to police reports. Numerous press reports have documented how much more aggressive police were with racial justice protesters than with those who stormed the Capitol.

TEA New York insisted they were welcomed to the Capitol on Jan. 6.

“No one broke down any doors to get into the Capitol building, the police opened them and greeted people,” the group’s Facebook account posted, with a video from TikTok.

The people who did break into the Capitol were clearly members of antifa, they insisted.

“After action reports will prove that it was antifa that sparked all the violence and break in at the Capitol building. Two more of the guys that got into the capitol building have been ID’d as PhillyAntifa,” Rus Thompson posted on Jan. 6 with a Tweet from a now suspended account. 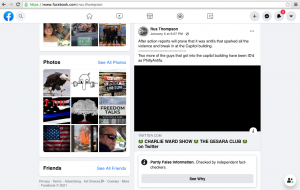 Rus Thompson’s Facebook profile on the evening of Jan. 6.

The FBI has said there is no indication antifa had played a role in the mob that stormed the Capitol. Many of those subsequently arrested have ties to radical right organizations.

After the event, Nicholas Orticelli, founder of the Constitutional Coalition and member of the Patriot groups, warned members involved in the Capitol riot on Facebook.

“I’m not saying that any of you, or us have anything to hide, but letting the FBI in your homes without a warrant, talking to them without a lawyer is plain stupid. Don’t do it under any circumstances, they’re not our friends. They are trying to build a case, based on a false narrative. They aren’t your friendly neighborhood police officers either. Don’t talk to them and don’t talk about other patriots to them. It’s not about having something to hide, it’s about respecting people’s Constitutional and Civil Rights.”

The radical right wasn’t pleased when Trump got banned from many social media platforms, including Facebook, Twitter and Parler.

Buffalo Eddie, a Facebook account run by Mark Walker — who tags himself “#AmericanSupremacist” and identifies as a member of to Rolling Patriots and Watchmen — posted his grievances.

“Fuck book is a corrupt tool of the left. Trying to silence good honest Americans, and don’t want you to know the truth,” he posted on Jan. 8.

Walker followed up: “So Facebook, Twitter and Google are trying to prevent President Trump from talking to the people. What are they afraid of???” 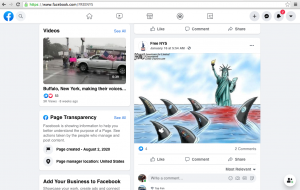 Nancie Orticelli, founder of the Constitutional Coalition and member of the Patriot groups, spew conspiracies.

“If Biden won, what are they so scared of? Why shut down Parler and censor the president NOW? What’s really happening that we don’t have a clue about?”

Platforms that banned Trump said they did so because his online rhetoric violated their policies and incited the Jan. 6 violence.

Since the events of Jan. 6 many of these organizations and their members have made their accounts private or deleted content.

Harding and Jul Thompson, who both spoke to local news organizations about their experience at the Capitol, have cleared content on their Facebook profiles.

The Orticellis said on their social media accounts they are ready for a revolution to start this year.

“Oh, the main point I forgot to mention in my post about 2021 looking like 1775. Destruction, murder, mayhem really didn’t matter much until PATRIOTS were literally at the Swamp-Politicians doorstep. Now it’s suddenly sedition, traitorous, federal crimes and more. Remember inauguration 4 years ago….BLM-ANYIFA all summer? Why weren’t all of these politicians vowing justice then?….” Nicholas Orticelli wrote on Facebook.

Nancie Orticelli agreed with her husband.

“Forced vaccinations, slaughtering the unborn, murdering our elderly, and removing our right to defend ourselves through anti 2 a laws. . These politicians are barbarians. We need a revolution.” 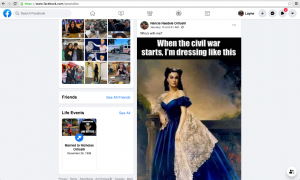 Nancie Orticelli posted this meme on her Facebook profile on Jan. 16.

“We can’t set it up as free speech and censorship. We have to look at it as, ‘These people are advocating violence and dehumanizing major parts of our population,’” Jones said.

Draft reports from the Department of Homeland Security, reviewed by Politico, stated “ideologically-motivated lone offenders and small groups will pose the greatest terrorist threat to the Homeland through 2021, with white supremacist extremists presenting the most lethal threat.”