Where’s a cop when you need one?

Buffalo police take much longer to respond to urgent 911 calls in Black neighborhoods than in white enclaves.
By Geoff Kelly

In Buffalo, crime — and the police response to it — is a tale of two cities.

Let’s say you witness an assault in progress on the city’s East Side and call 911.

That’s a high-priority call: The threat of harm is immediate and there is — or was, at the time of the call — a suspect on the scene to arrest. The patrol officers who field the call are going to hurry. But they may not arrive as quickly as you’d hope.

The difference is even bigger for domestic violence calls. In predominantly white South Buffalo, the median response time was about 10 minutes. In C District — the heart of the predominantly African-American East Side — it was almost 26 minutes.

In partnership with Andy Bailey of Primary Data, Investigative Post analyzed 911 calls made to Buffalo police between January 2014 through July 2020, obtained through a Freedom of Information Law request to Erie County Central Police Services.

Here’s what we found:

This citywide slowdown in response times occurred over a period in which the annual number of 911 calls to Buffalo police — for everything from murder to cats stuck in trees — dropped by about 5 percent.

The number of calls for the high-priority dispatch codes on which we focused dropped even more: 24 percent.

The only dispatch code that increased markedly in the period we studied was traffic stops. Those rose nearly 48 percent.

How we did the analysis of 911 calls

While response times slowed, there are more officers on the force today to handle those calls. The department currently has 748 uniformed officers on the payroll, with room for an additional 50 in the city budget. That’s up from a low of 700 officers in 2016.

The statistics — longer response times, despite more cops and fewer 911 calls — are befuddling to Michael Powell, chair of the Buffalo Police Advisory Board, a citizen panel that advises the Common Council’s Police Oversight Committee.

“I wasn’t ever great at math, but I can tell you that that doesn’t quite add up,” Powell  told Investigative Post.

Response times by the numbers

However you crunch the data, two facts are evident.

First, response times are up citywide.

Second, police respond more quickly to calls from some parts of the city, and to different kinds of calls, than they do to others.

For all five dispatch codes we tracked, response times were significantly slower in the two East Side police districts compared to the districts that cover South Buffalo, downtown, North Buffalo, Black Rock and Riverside, the Elmwood Village and the West Side, including Allentown.

Outside the East Side, the median response time to a burglary call was pretty consistent: about six and a half minutes. That’s in line with the department’s expectations, according to Captain Jeffrey Rinaldo, who was the department’s spokesman until he retired in July.

Speaking with Investigative Post before he left, Rinaldo estimated that Buffalo cops usually arrived at the scene of high-priority calls, like the ones we sampled, “in the five-minute to seven-minute range,” if not more quickly.

The data show that range was most often achieved in whiter, more-affluent neighborhoods, where crime rates are lower than other parts of the city. 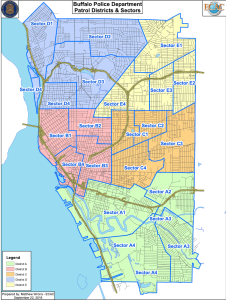 Rinaldo said the department seldom uses 911 call logs to evaluate how it’s doing on response times, except when citizens complain. Then, he said, the department’s Internal Affairs Division might pull the 911 data to help determine what, if anything, went wrong.

According to Powell, the Buffalo Police Advisory Board chair, citizens do complain — though not always directly to the department.

What the community says

Powell said one thing he’s learned in those meetings is that many people of color living in poor neighborhoods with higher crime rates feel simultaneously over-policed and under-served.

“On one hand, you have patrol cars driving up and down the street … every street, every side street,” Powell said.

“There’s this almost communal trauma from just this overbearing presence … always there, always sort of watching you, but not ever there to help. Not ever there to make you feel safe.”

On the other hand, East Side residents complain that when they call 911, police sometimes are slow to respond, according to Powell. When police arrive, there’s no guarantee they’ll improve the situation, he said. People of color have been killed and injured when encounters with police have gone wrong, Powell said. That tension engenders fear and distrust.

As to why response times are slower in East Side neighborhoods, Powell suggested the negative feelings might be mutual, causing police to subconsciously “devalue” 911 calls from poor neighborhoods.

“If I’m in an area where I don’t feel like the police are there to help me, I’m not going to bother wasting my time calling the police, because I know they’re not going to show up,” Powell said. “And if they do, I don’t know what’s going to happen.”

In an interview shortly before he left the department, Rinaldo bristled at the assertion that the racial or economic demographics of a neighborhood have anything to do with how police respond to 911 calls.

“In terms of this being a race issue, it’s just absolutely not accurate,” Rinaldo said.

“Our response times are based on a number of things. Number one, how many calls for service are occurring at any particular point. Number two, the nature of the call.”

As Investigative Post reported previously, police in East Side districts field more 911 calls than those patrolling other parts of the city. Crime is higher in those neighborhoods. There are more high-priority calls, too.

Some districts are geographically more challenging to patrol, Rinaldo said, due to size, street patterns and population density.

Staffing can make a difference, too. The city’s contract with the police union permits the police commissioner to adjust staffing levels twice a year across the five districts.

In order to make those adjustments, Rinaldo said the department uses 911 logs to track the volume and types of calls each district receives. However, the contract also prescribes minimum staffing levels. So the department, for example, can’t simply hollow out A District and send its officers to improve response times in the much busier C District.

The commissioner has some flexibility outside the twice annual redistribution of officers.

“If we have a number of commercial burglaries happening, and we can narrow it down to say, between Sunday and Tuesday night, this person or persons seem to be striking in this area between this time, we routinely set up special details to address just that issue,” Rinaldo said.

Furthermore, a district chief can lend patrol officers to another district on a shift-by-shift basis.

“A shooting call, a homicide call, things like that are going to tie up a number of cars,” Rinaldo said, in which case one district’s officers might be sent to assist a neighboring district that’s overwhelmed.

Response times aren’t helped by the department’s inadequate and poorly maintained fleet of patrol cars. The shortage of working cars sometimes hamstrings officers during their busiest shifts, according to John Evans, the president of the Police Benevolent Association.

Indeed, response times increased markedly in 2018 and 2019, years in which the police union complained often about the growing decrepitude of the department’s patrol cars.

According to Rinaldo, the city has earmarked more money for new patrol cars and mechanics in the past two years than in previous budget cycles. Factory shutdowns during the COVID pandemic delayed delivery of those vehicles and made parts harder to come by. Nonetheless, the department has put 46 new patrol cars in service in the past year, according to Rinaldo, and 26 more are on order. That’s enough to replace about a third of the fleet in the course of a year — about the industry standard.

“I think we’re definitely on track to be able to replenish enough of the aging fleet that we shouldn’t have to have serious shortages of cars like before,” Rinaldo said.