Who is Congresswoman Claudia Tenney?

The Central New York Republican is running for seat that will include a portion of WNY's South Towns. Her record indicates she's part of the Trump wing of the GOP.
By Geoff Kelly

Redistricting will make U.S. Rep. Claudia Tenney’s 22nd District more friendly to a Democratic Party challenger. So the Utica native — who won squeakers in 2016 and 2020, and lost to Democrat Anthony Brindisi in 2018 — is looking west.

Tenney, 61, will run this year in the 23rd District, currently represented by Republican Tom Reed, who is retiring after being accused of sexual misconduct.

The 22nd District Tenney represents now runs through the middle of the state, from the eastern end of Lake Ontario to the Pennsylvania border, including Utica, Rome, Cortland and Binghamton.

The new 23rd District, like the current one, will encompass the Southern Tier. But the district’s new lines will extend north as far as Orchard Park, bringing Tenney — should she win — into the Western New York political firmament. 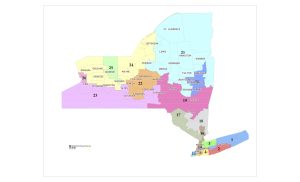 Pending litigation, these are New York’s new Congressional districts. Claudia Tenney, who currently represents the 22nd District, is running this November to represent the 23rd.

So who is she?

Tenney was elected to represent the 22nd District in Congress in 2016, after spending six years in the state Assembly and unsuccessfully pursuing several judgeships. In 2018, she lost to Democrat Anthony Brindisi. In 2020, she came back to beat Brindisi in 2020 by a mere 109 votes — the closest Congressional race in the country that year.

When she took office in 2017, she became a reliable supporter of President Donald Trump. According to FiveThirtyEight.com’s congressional scorecard, she voted Trump’s position on bills before the House 96.9 percent of the time. The conservative Heritage Foundation scored her performance at 91 percent — two points more conservative than U.S. Rep. Chris Jacobs and tied with U.S. Rep. Elise Stefanik. Of the state’s seven Republican members of Congress, only U.S. Rep. Lee Zeldin scored higher. 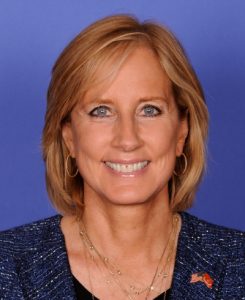 However, other analyses (here and here) put her smack in the middle of the Republican pack, in terms of party ideology, based on the bills she’s sponsored or co-sponsored and voted for or against.

The League of Conservation Voters ranks Tenney very low on environmental issues, at 7 percent. For example, she joined the most conservative House Republicans in voting against amendments to the National Forest Restoration and Remediation Act. The largely uncontroversial changes, which passed the House with bipartisan support, would allow the U.S. Forest Service to use more of the fines collected from bad actors in the timber industry for remediation efforts.

On the other hand, she was one of just 23 House Republicans to vote for the PFAS Action Act of 2021. The act directs the EPA to categorize a dangerous family of widely used chemicals as “hazardous substances,” an important step in regulating their use and disposal. Tenney’s support indicates a willingness to buck the party when an issue is important to her constituents: PFAS contamination is a concern in Central New York and the Southern Tier, as well as here in Western New York.

In any case, her legislative record is often overshadowed by public comments on hot-button issues that situate her comfortably in the Trump wing of the GOP:

She voted to repeal the Affordable Care Act (a.k.a. Obamacare) and to fund Trump’s Mexican border wall. She voted against the American Rescue Plan, which provided $1.9 trillion in pandemic relief.

In the week after Russia launched its war on Ukraine, she introduced a resolution calling on the United Nations to remove Russia as a permanent member of the U.N. Security Council.

The new 23rd District lines will be the most solidly Republican district in the state, according to an analysis by FiveThirtyEight.com — a title previously held by Jacobs’s 27th District, which is being eliminated as a result of the state’s population loss.

No Democrats have declared their candidacies. In 2020, Democrat Tracy Vitrano lost to 23rd District incumbent Reed by more than 16 percentage points.