Politicians picked their constituents the last time lines were drawn. It's happening again. Activists and good government types are mobilizing.
By Geoff Kelly

A coalition of activists and good government groups is urging Buffalo’s Common Council to reject a redistricting plan that has been moving quickly and quietly toward approval.

And they’ve got a plan of their own to put in its place — one they say does a better job keeping neighborhoods together and promoting racial equity, while undoing the gerrymandering of a decade ago.

The proposal moving through the Council was submitted last month by a citizens commission charged with recommending new district lines based on 2020 Census numbers. That commission worked largely behind closed doors, with little public notice or input, the coalition argues. And its plan doubles down on political trade-offs made in 2011.

“[T]he proposed plan creates nine districts that are close replicas of their status quo counterparts,” wrote Russell Weaver, a geographer with the Cornell ILR School, in his analysis of the commission’s plan .

Weaver’s study lays out the changes in Buffalo’s population, per the 2020 Census, alongside the criteria meant to guide the redistricting process. Then he compares the existing districts, the “status quo” plan put forth by the citizens commission, and an alternative he drafted.

On June 14, the Council announced there would be a public hearing on the commission’s “status quo” redistricting plan on June 28.

That’s the day of the primary election.

“This tells us everything we need to know about how little they respect or value our input,” said Harper Bishop, a leader of Our City Action, noting the city charter gives the Council until the end of July to finalize a new redistricting plan.

“As their constituents, we — everyday Buffalonians — should be informed, engaged, and encouraged to participate. There is enough time to hear from residents about what we want, but they are not even pretending to listen.”

The last time the Common Council drew new district lines, in 2011, the result was a textbook example of gerrymandering to serve the interests of incumbents.

The Fillmore and Ellicott districts, in particular, were redrawn to benefit their representatives, David Franczyk and Darius Pridgen, respectively. Parts of Allentown were appended to the Fillmore District, otherwise rooted in the East Side, creating a horseshoe around downtown. (This reporter dubbed the result “Fillmore’s Screaming Eagle,” because it looks like a bird of prey, wings outstretched.) The East Side and West Side sections of Fillmore were connected by a strip of lakefront that carefully excluded the waterfront condominium where Pridgen lived at the time.

The new lines yielded favorable demographics for both incumbents.

“Redistricting should make districts more fair, equitable and functional,” Bishop said. “Elected leaders should be chosen by their constituents, not vice versa.”

Weaver was also one of only two members of the public to attend the May 18 meeting at which the current commission — chaired by Franczyk, who retired in 2019 — presented the “status quo” plan the Council is currently considering.

That was the first time Weaver had seen the proposed boundaries, which reiterated the redistricting he’d voted against 11 years ago.

According to Weaver, the 2011 process — even if he disagreed with its end result — was far more open than the current one has been. The commission’s meetings were not well advertised and were not streamed online. There are no meeting minutes available on the commission’s web page. The May 18 hearing was advertised twice on the Council’s Facebook page.

I might be wrong, but it seemed like the local redistricting process in Buffalo was unusually quiet. The public hearing that happened last night was only announced last week, & I never saw any public notice about the commission being empaneled or when it was having meetings
🧵1/ https://t.co/FPBFsuOBet

Weaver set to work drawing an alternative. He used the city’s planning neighborhoods — used by city officials for policy purposes — as a starting point, endeavoring to keep them intact whenever possible.

According to Weaver, his alternative does a better job meeting the criteria for fair and functional redistricting. He maintains the populations of each district are closer to equal in his plan; neighborhoods and communities of interest are better preserved; and ungainly and overly complex district shapes are greatly reduced. 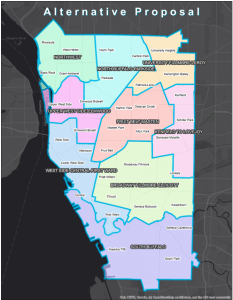 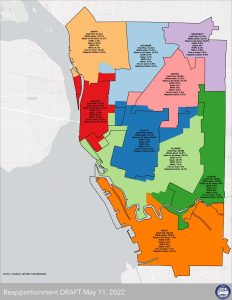 Our City Action has been collecting petition signatures and public comments asking the Council to reject the commission’s proposal and consider Weaver’s alternative instead.

On Weddnesday, June 22, from 1 to 3 p.m., Our City Action will host a discussion via Zoom, in advance of the Council’s public hearing next week.

“The neighborhood-based alternative plan commits to empowered governance and advancing racial equity in Buffalo,” Bishop said, noting that Weaver’s proposal is likely to increase electoral power for voters of color.

The Council’s public  hearing will take place in Council chambers at 5:00 p.m., in person, via Zoom, and streamed on the Council’s Facebook page.

Once the Council adopts a redistricting plan, it will go to Mayor Byron Brown for his review. The mayor, too, must hold a public hearing before signing the plan into law.