Buffalo is slowly losing its trees

The city is cutting down trees at twice the rate it's planting them, and in portions of the East Side, the ratio is 4 to 1. Health can suffer with a loss of tree coverage.
By Layne Dowdall

Buffalo is cutting down twice as many trees as it’s planting. And residents are noticing the loss.

“It’s nothing like when I was a child,” said Catherine Faust, a Highland Avenue resident in the city’s Elmwood Village.

An Investigative Post analysis found the rate of tree loss is greater in parts of the East Side. Masten District, for example, lost four times as many trees as were planted.

“It is one of the most despicable things that I can imagine because of the relationship of a green infrastructure, especially a tree canopy, to health outcomes,” said Dr. Henry Taylor, director of the Center for Urban Studies at the University at Buffalo.

Arborists and tree-planting organizations said there are challenges in planting trees on the East Side, especially when it comes to aftercare and maintenance.

“It’s always difficult to plant in the East Side, unfortunately, because if you put in a tree it’s going to die, because there’s maybe not even a house on that property,” said Paul Maurer, chairman of Re-Tree WNY, a nonprofit organization that works with the city to plant trees. “It’s hard to expect a lot of help in that area.”

Communities with fewer trees often experience higher rates of asthma and other respiratory diseases, as well as more cardiovascular and psychological disorders. This inequity is a problem many cities across the country are facing, said Ian Leahy, vice president of urban forestry at American Forests, a national nonprofit researching tree equity in cities.

“We’re in this situation of this big tree equity gap,” Leahy said. “And it’s going to take an investment at the local level to fix.”

The city has budgeted nearly $1 million for tree-related operations this year, mostly to cover personnel and contractors. Another million in bonds have been sold this year to cover the purchase and planting of trees, among other expenses. While the city is spending about one-third more than it was a decade ago, some residents, like Faust, feel it should be investing more.

Experts and local advocates offer a lot of solutions. Re-Tree Western New York, for example, said they’d help water and maintain trees on the East Side, if they could raise the necessary funding.

“We just don’t have the money for it,” Maurer said.

Part of the problem is a decision made by city officials over half a century ago.

Elm trees lined many of Buffalo’s streets throughout the early and mid 1900s. Then Dutch elm disease struck in the 1950s and 1960s. The fungus killed more than 10,000 elm trees over two decades.

“When I was a child, our street had the arch of elm trees,” Faust said. “I remember the big trucks coming down the street with these giant hoses spraying the underside of the elms.” 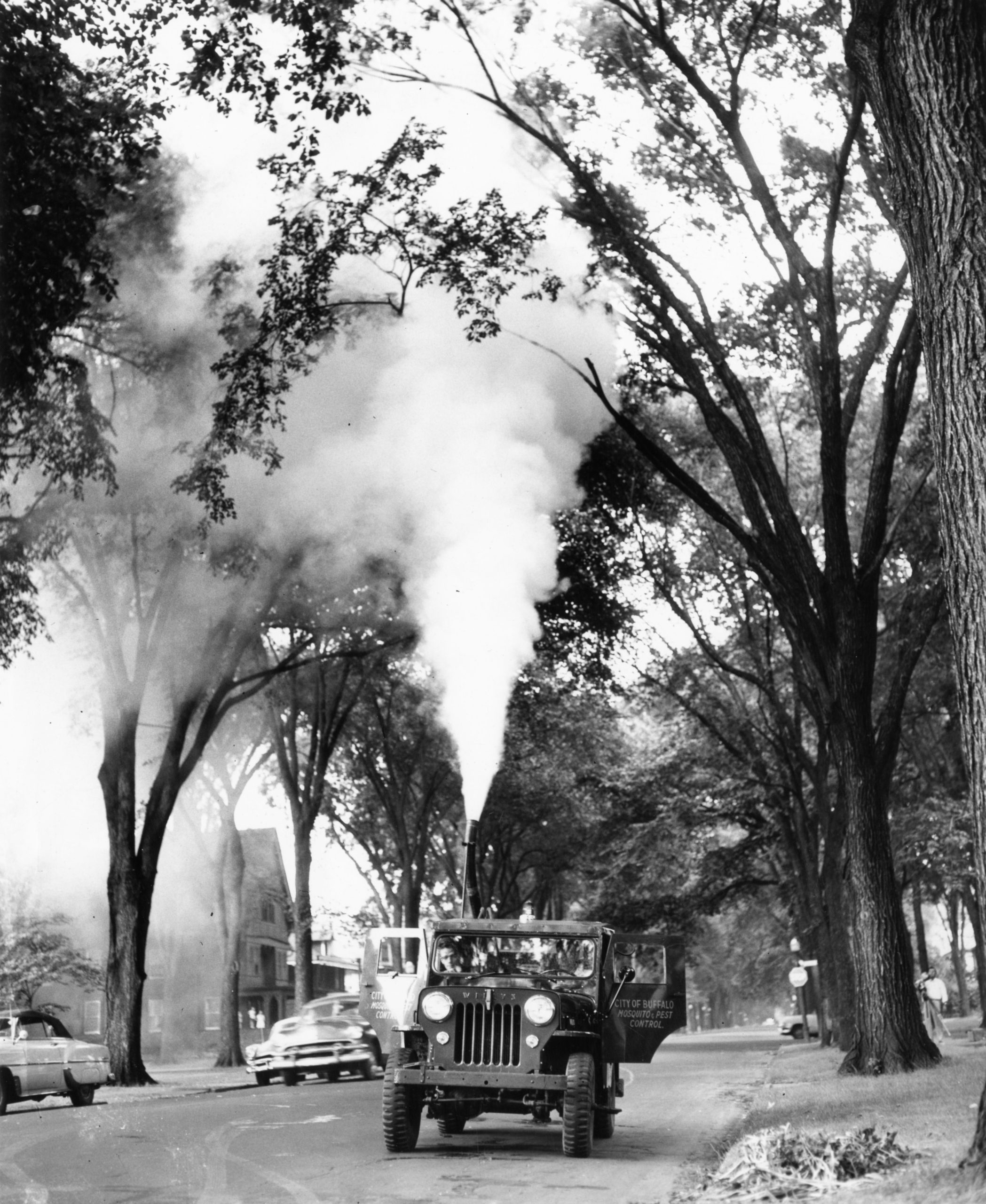 After the ruin, city officials chose to replace much of the lost canopy with Norwegian and silver maples, as well as linden trees. Those species were relatively inexpensive and fast-growing — seemingly good options.

Now, city officials tell Investigative Post those trees are reaching the end of their lifespan. Their roots are damaging sidewalks and residential property and their trunks and branches are rotting from the inside out.

They’re getting cut down as a result. 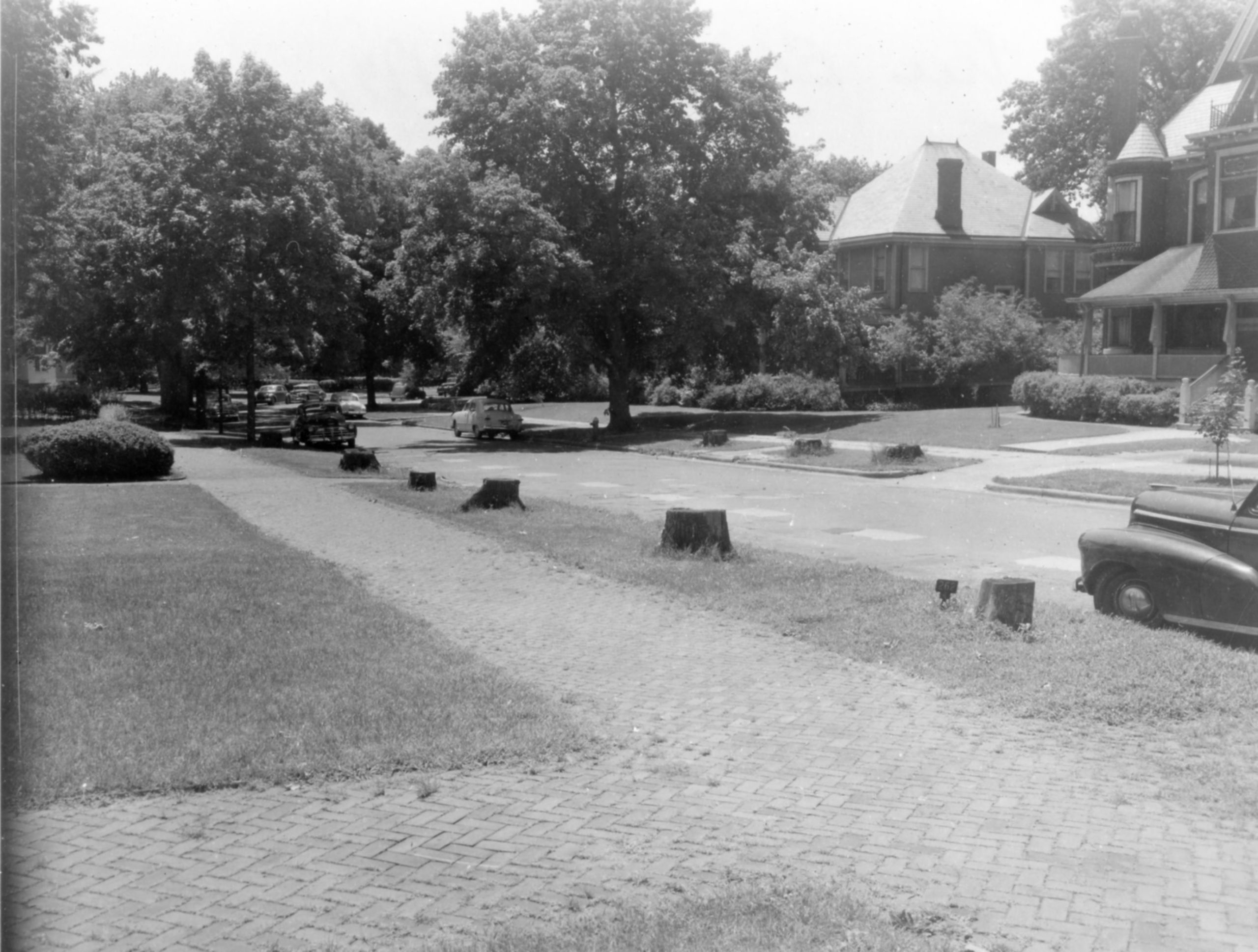 Stumps are all what remains after trees removed in the early 1950s due to Dutch Elm Disease.
Photo courtesy of the Buffalo History Museum.

Faust, who saw the elms die, is now witnessing the demise of the Norway maples that line her street.

Another longtime resident of the street, Anne Sessions, has been watching, too.

“When they finally do cut them down, you know, they’re almost nothing in the middle,” Sessions said. “A friend of mine had one fall on her car on Lexington Avenue. You get a big wind and you get limbs coming down in people’s yards.”

Tree damage is especially a problem during winter storms. In 2006, an early winter storm claimed more than 11,000 city trees. Others, still standing, continue to show the scars.

“We lost a lot of trees due to that October storm that had long-term impacts on trees,” said one city official, who spoke to Investigative Post on background. “Maples don’t always recover from wounds as easily as some other species.”

Nearly 10 percent of the trees cut down between 2016 and 2020 were ash. They are at risk of infestation by emerald ash borers, an invasive insect that feeds on the tissue under a tree’s bark, often killing it within just a few years.

Arborists told Investigative Post it can cost anywhere from $150 to $500 to plant a new tree. Removing a tree, on the other hand, can cost $1,000 or more, depending on the size and state of the tree.

Impact on the East Side

Some areas of the city have suffered greater tree losses than others.

An Investigative Post analysis found overall tree loss was greatest in areas of the East Side. Masten and Fillmore districts lost the most.

Eighty-eight percent of Masten residents are people of color. Thirty-six percent live below the poverty line. The poverty rate is even higher in Fillmore, at 41 percent, where 60 percent of residents identify as minorities.

North and Niagara districts lost the fewest trees, averaging close to the citywide rate of two trees removed for every one tree planted. 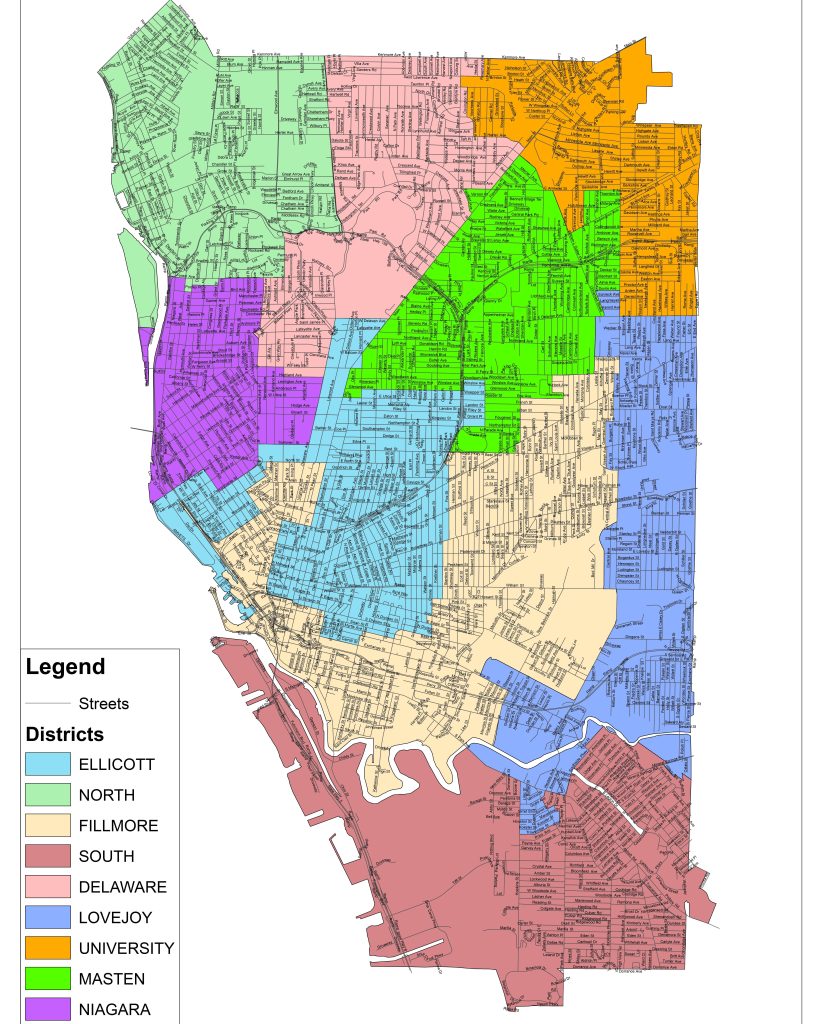 “If you go on Google map, the satellite view, then you take a look at the East and the West sides, you can visually see the difference between the two places,” said Taylor, of U.B.

The criteria for removal: A tree must be dead, dying, or infested, or pose an immediate hazard. Trees can also be removed to make way for development. City officials maintain their policies do not discriminate against any neighborhoods.

“We don’t look at where a tree is in determining whether or not it needs to be removed,” the city official said.

Plantings can be requested by residents through the city’s 311 Call Center.

“The wait is about a year for us to get the tree for free,” the official said.

Total number of trees by Council district in 2020

“It’s always difficult to plant in the East Side,” said Maurer, with Re-Tree WNY.

New trees require aftercare, which is often left up to residents. And research shows residents often don’t want new trees planted until trees already in the ground are properly maintained.

“Very few people actually oppose having trees around, but what they oppose was the lack of maintenance,” said Leahy, with American Forests.

Taylor said that’s true of many East Side residents.

“It’s not just planting a tree, but it’s maintaining it, the pruning, all of the other elements that are involved,” he said. “You don’t find a groundswell of people walking around, ‘We want oak trees, we want one,’ because they don’t. Because they’re afraid that they’ll never be maintained, and the trees will be all out of control.”

Tree coverage is not just a matter of aesthetics; it also has health implications, especially on the East Side.

“You’re talking about a section of a Buffalo that’s dissected by all these major thoroughfares, which means that on a daily basis there are thousands of cars and trucks and buses moving through the East Side spewing all kinds of pollution in the air,” Taylor said.

The problem is twofold, according to Leahy, of American Forests.

“As cities are now heating up, it’s becoming more of a life-and-death infrastructure, you know, even in Buffalo, where you’re going to have extreme heat,” he said.

Research shows there are currently about 12,000 heat-related deaths nationwide each year. 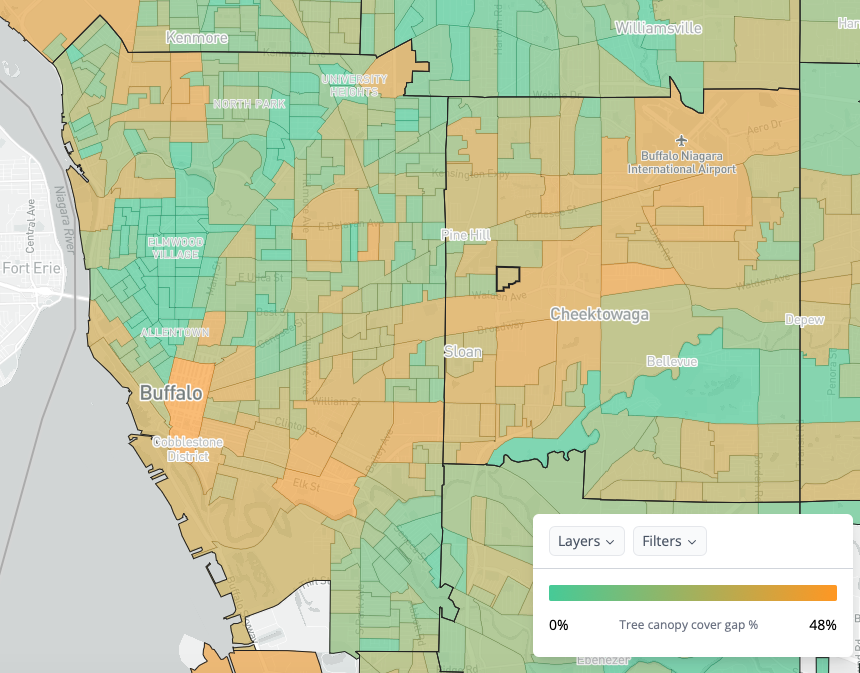 Tree coverage as tracked by American Forests. The darker the orange, the less coverage; the deeper the green, the most coverage.

A second issue, according to Taylor, is that the East Side has long suffered from disinvestment.

“The green infrastructure on the East Side is extraordinarily weak,” he said.

Taylor said this is an issue the city should be able to address.

“Green infrastructure. That’s not complicated,” Taylor said. “You put trees, you plant shrubbery, you maintain them. You create stormwater gardens. I mean, there’s all kinds of things that you can do.”

One solution is more funding — to increase plantings, improve infrastructure and provide aftercare and maintenance for new trees.

“A lot of it is just budget,” Leahy said. “But you know, a lot of cities, usually post-industrial, just don’t have the resources.”

Buffalo’s Bureau of Forestry has been gradually growing over the past decade. The city allocated $916,831 in last year’s budget to cover the cost of personnel — a forester and three workers — and contracts for tree trimming, inspection and inventory updates. The city also sells bonds to pay for tree removals and planting contracts. The last bond sale was worth $918,000.

That’s about one-third more than the city spent a decade ago. Some residents think the city should be investing more.

“The thing that I worry about is that the city forestry department is constantly underfunded,” said Faust, the Highland Avenue resident.

Other cities have worked to reduce inequities by adopting policies and/or  partnering with community organizations. Seattle and Washington, D.C., for example, have started planting several smaller trees to replace large trees, rather than replanting one-for-one.

“If you move a tree with a 10-caliper-inch trunk, which is the diameter across the trunk, then you have to plant, say, five two-inch trees within the vicinity,” Leahy said. “That’s a good way to at least keep your overall canopy from declining.”

Others use community partnerships.

“Cities are often very, very restricted on what they can do,” Leahy said. “So the most successful ones are a collaborative relationship between a robust nonprofit and the city.”

Maurer said Re-Tree New York, which has planted more than 60,000 trees in the region since the October storm of 2006, wants to do more plantings in the city and help in their aftercare and maintenance by creating a dedicated watering group.

“We’d love to do more in the inner city,” Maurer said. “We could go out in the summer months, keep those trees watered until they go dormant in October. And then we’ll come back again in the spring for a couple of years, and all those new trees will be thriving.”

“That’s a luxury we just can’t, at this point, afford.”

Phil Gambini contributed to this story.