Officials have given the final approval to $124 million in tax breaks to the e-commerce giant to build a warehouse in the Town of Niagara
By J. Dale Shoemaker

It took the Niagara County Industrial Development Agency less than a minute Wednesday to approve $124 million in tax breaks for Amazon to bring 1,000 warehouse jobs to the Town of Niagara.

Amazon, one of the world’s largest and wealthiest companies, plans to open a 3-million-square-foot warehouse along Lockport Road, which will be a “first mile” distribution center where bulk shipments of goods will arrive and be sorted and packed for shipment to other Amazon facilities in the region.

The goods will make their way to customers from those other facilities. 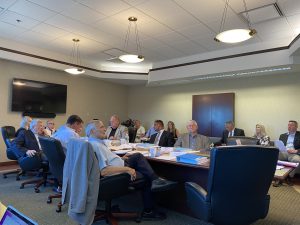 Despite hearing concerns from residents about the $15-per-hour jobs and increased truck traffic on local roads, the IDA Board of Directors approved the subsidy package without discussion Wednesday morning.

Niagara County IDA Chairman Mark Onesi defended the decision after Wednesday’s meeting, telling reporters that he prioritized the discounted tax revenue Amazon would bring to the area over other concerns.

“Those [subsidies] are there for a reason, doing business in New York is expensive and a lot of companies won’t come without those inducements,” Onesi said.

He added that the $49 million in taxes Amazon will pay over 15 years “is a whole lot better than the $24,000 a year that that property pays in taxes right now.”

The subsidies rank as the sixth-largest subsidy ever given to Amazon, according to data collected by the corporate subsidy watchdog Good Jobs First.

The IDA vote Wednesday was the final government approval the project required.

Onesi, in an interview after the meeting, maintained that Amazon wouldn’t have come to Niagara County without the tax breaks and said he trusted that the company would increase the wages it pays if it couldn’t find enough workers.

He termed the $15 hourly wage “just the baseline conservative number. Everybody’s focused on that, okay? If they have to raise it, I’m sure they will, in order to reach that 1,000 employees.”

“Because if they don’t reach the 1,000 employees within a certain amount of time, we can claw back any incentives they’ve gotten.”

In addition to being opposed by some residents, a coalition that includes Good Jobs First urged the IDA to reject the Amazon deal.

“There’s no reason Niagara County taxpayers should be using their money to subsidize Amazon’s opening of another warehouse, which the massive multinational must do to hit next- or even same-day delivery promises,” said Arlene Martinez, deputy executive director and communications director at Good Jobs First.

“Instead of dumping its tax load onto Niagara area families and small businesses, Amazon should pay its locally hired workers a living wage ($15 is laughable) and pay communities for the wear and tear on roads, the schools that will educate their workers’ children, and to help mitigate the pollution it will generate.”