Buffalo is cutting down more trees than it's planting, especially on the East Side. A new pot of money from Washington could help reverse that trend.
By Garrett Looker

The City of Buffalo spends a lot of money — $568 million this budget year.

Most of it is spent on cops and firefighters.

Very little is spent on planting and maintaining trees, which play an important role in the health of city residents. In fact, the city’s population of trees is shrinking, as two trees are cut down for every one that is planted.

Help could be on the way, however.

The federal government has earmarked $1.5 billion under the Inflation Reduction Act to pay for the planting and maintenance of trees in urban centers. The money will be handed out through a competitive grant process.

“[W]e have an opportunity with resources that we can actually disburse to meet the need. That’s an incredible moment in time for us,” said Beattra Wilson of the U.S. Department of Agriculture Forest Service.

Officials in Buffalo say they will pursue the funding, although Mayor Byron Brown contends the city does not have a tree-equity problem.

“We think, as it relates to trees, Buffalo is an equitable city,” Brown said.

That’s despite the findings of an Investigative Post report in July that found the city is cutting down as many as four trees for each tree it plants in some Black neighborhoods. Investigative Post found numerous examples of residential streets on the East Side bereft of trees.

While the city is cutting down more trees than it’s planting, several community groups are trying to fill part of the void. Some residents are hesitant, however, concerned that trees could disrupt sewer lines and heave sidewalks if not properly maintained.

University District Council Member Rasheed Wyatt told his constituents at a recent community meeting that the city should “absolutely” be responsible for paying for tree maintenance near curbs.

Wyatt and another Council member in a district losing trees, Mitch Nowakowski of Fillmore, said the city should step up its tree-planting efforts.

“Nothing says we care more about trees than dollars and cents,” Nowakowski  said.

With the $1.5 billion pot of federal money, he said, “I have my homework cut out for me to really get ahead of the eight-ball to start really coming up with a plan.”

“Money would go a long way”

“It is one of the most despicable things that I can imagine because of the relationship of a green infrastructure, especially a tree canopy, to health outcomes,” said Henry Taylor, director of the Center for Urban Studies at the University at Buffalo.

The city Bureau of Forestry’s budget — including labor, equipment, and trees — is $953,702 this fiscal year. A portion of the $1.5 billion in federal funds could supplement that allocation.

According to the legislation, the funds are “for tree planting and related activities, with a priority for projects that benefit underserved populations and areas.”

Darren Cotton, founder of The Tool Library, which is planning a fall tree planting next month around its nonprofit in the University District, said the “money would go a long way.”

“There just isn’t enough money to properly equip both organizations, as well as local governments, with the resources they need to plant trees at scale,” he said.

The federal funds will be disbursed through competitive grants that local governments and nonprofit organizations can apply for, said Wilson, assistant director for Urban & Community Forestry at the U.S. Forest Service.

It’s uncertain, however, when the money will start to flow or the criteria that will be used to select winners.

Brown said the city will seek the federal funding, and with it, “accelerate the planting that takes place citywide in Buffalo.”

Andrew Rabb, deputy commissioner for Parks and Recreation, said the city is “reviewing this funding opportunity as we await guidance from State officials on how and when to apply.”

U.S. Rep. Brian Higgins, whose district includes the East Side, noted that nonprofits are eligible to apply.

“I think with the history of Buffalo, given the history of the Black East Side of Buffalo – having had a parkway stolen from it – that speaks very, very well to the viability of non-for-profits and the city of Buffalo to both aggressively pursue that funding,” he said.

Some community businesses and nonprofits are already acting.

Eugene V. Debs Hall, located in the shadow of the Central Terminal, has requested that the city plant 19 street trees that the social club will maintain along Peckham Street, between Fillmore Avenue and Memorial Drive. The plan, submitted on Aug. 8, has a “shared goal … to fully restore the street tree canopy in Broadway Fillmore.” 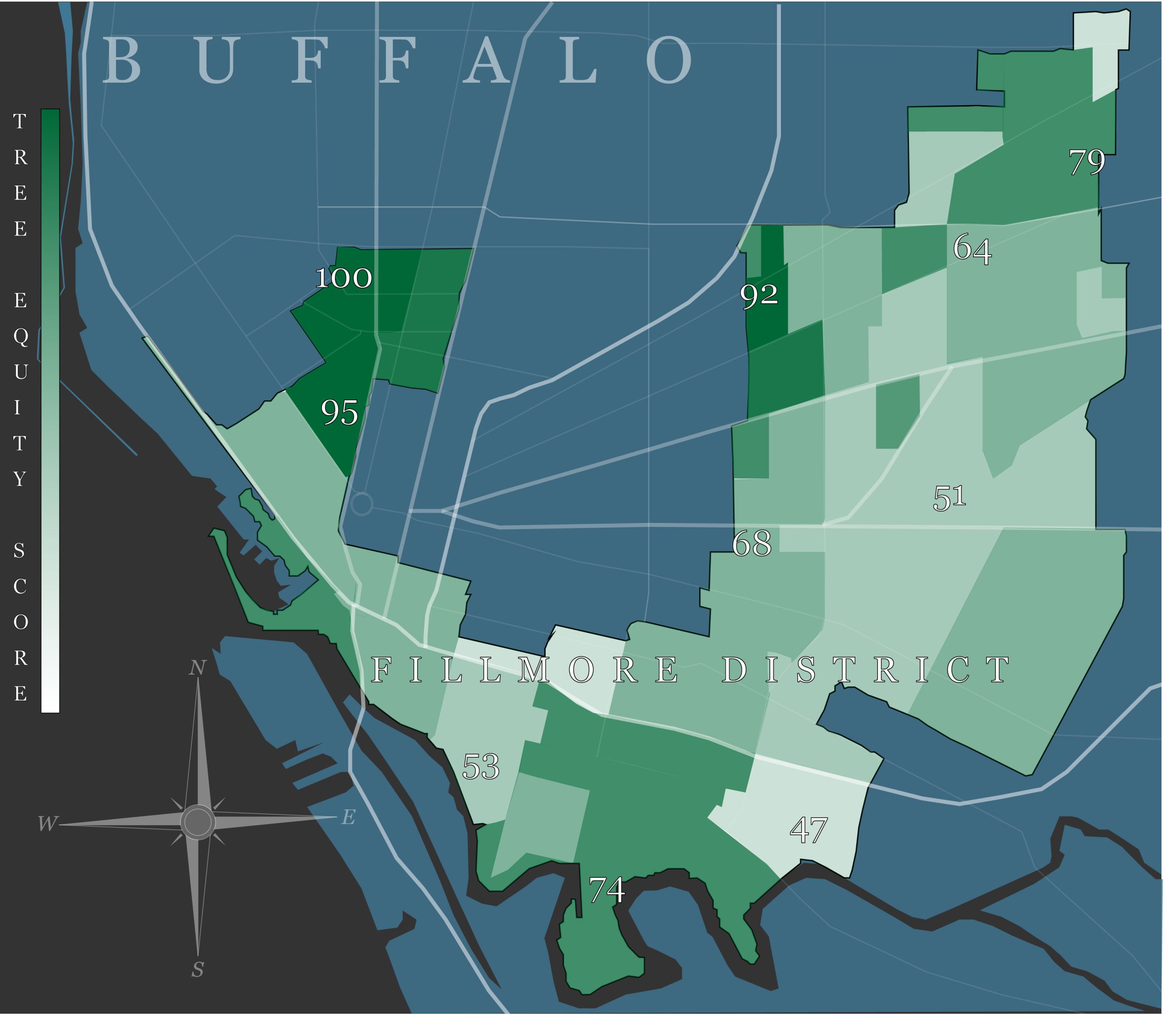 This map illustrates the disparity in the distribution of trees in the Fillmore district. Sections noted in dark green, such as Allentown, have the most trees. Those in lighter shades of green, including many East Side neighborhoods, have less tree coverage.  Source: American Forests.

The initiative seeks to remedy an imbalance illustrated by the five trees that stand along nearby Rother and Houghton avenues, compared to the 90-plus trees along Mariner Street in Allentown — both part of the Fillmore District.

In the University District, The Tool Library plans to plant 69 trees in early November around its nonprofit at Main Street and Northrup Place.

“It’s a chance to sort of revisit where we were,” Cotton said, “and kind of look back and see how far we’ve come, how far there is left to go when it comes to these sorts of projects.”

Re-Tree WNY has partnered with the city in the past. Its intentions in light of the $1.5 billion in federal funds is unknown, as Paul Maurer, its chairman, could not be reached for comment.

Not everyone is sold on the idea of more trees, however.

Many voices rose out in opposition when Wyatt brought up the potential of more trees being planted in his district at a September community meeting,

Beunice Turner raised concern for the damage tree roots may cause to sewer lines.

“I’m not against trees,” she said. “You can’t wait until there are St. Bernard roots in your sewer.”

Turner echoed the sentiment of others in the crowd, who spoke of maintenance issues of trees planted near their property.

“I think sometimes, when you live in this type of area, that you don’t even know what you’re missing,” said Lois Young, vice president of the University District Block Club Coalition. “You don’t even think that it can be afforded to you … and the benefit of it, not only health-wise, but your view of life.”

Indeed, experts say a lack of trees can have health consequences for residents.