Less than a quarter of the plant's workforce is engaged in solar-related manufacturing, and work stopped completely half of last year. As a result, there's been none of the promised spin-off development. Story updated to include podcast.
By J. Dale Shoemaker

When Gov. Andrew Cuomo announced plans in 2013 for what is now Tesla’s factory in South Buffalo, he pitched it as a cornerstone of the “clean energy revolution” and a new high-tech industrial sector for Western New York.

The project would create not only more than 1,400 direct jobs, but spin-off development that would provide a supply chain employing thousands of additional workers. Cuomo proclaimed the project a “game-changer.”

Fast-forward to today. Less than one-quarter of the workforce at the Tesla factory is engaged in solar-related manufacturing. That work was suspended altogether for at least six months last year.

Podcast: Shoemaker discusses how he reported the story and what he found

Employees told Investigative Post that the current solar work takes up less than 20 percent of the plant’s sprawling 1.2 million square feet, built and equipped with $959 million in state tax dollars.

A current Tesla employee told Investigative Post that four years ago “every person there was solar … 300 to 400 people are probably working solar now.

Most of the jobs at the Tesla factory these days involve work related to Tesla’s electric vehicles. Many are entry-level desk jobs that require only a high school diploma.

About 500 jobs — nearly one-third of the current workforce of 1,636 — are those entry-level desk positions, in which workers label images from the company’s self-driving vehicle software — merge signs, turning lanes, pedestrians — in an attempt to train the autonomous driving algorithms. The rest of the auto-related jobs involve the assembly of charging equipment for Tesla cars.

“I don’t believe that the solar manufacturing that was promised in New York is being executed as planned or as promised,” said Christoper Stout, a Tesla employee who’s worked at the plant since early 2019 and is currently on leave.

The Tesla plant has not generated any of the anticipated spin-off development. Vast expanses of  land around the Tesla plant remains fallow, save for a Tim Horton’s across from the plant’s main entrance. 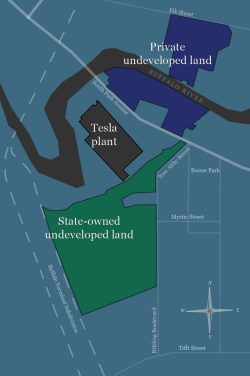 Behind the Tesla factory, a state development agency owns more than 100 acres of vacant land. Another 50 acres across the street, controlled by assorted private owners, is largely empty. And developer Peter Krog lists an additional 35 acres as up for development just across the Buffalo River.

The state has amended its contract with Tesla no fewer than a dozen times over the years, reducing the number of required manufacturing jobs and loosening the definition of what constitutes that work. A former Empire State Development official confirmed to Investigative Post that the state allowed and encouraged Tesla to use the facility for purposes beyond solar manufacturing.

This story is based on a review of hundreds of pages of court records, 3,000 pages of emails and other documents; interviews with three employees — two current, one former — as well as three solar industry analysts and a former executive with Empire State Development, the development agency that oversees the Tesla project. Tesla and current ESD officials, as well as executives with Panasonic, Tesla’s short-lived partner, refused interview requests.

“I’d say that Buffalo probably could have invested a billion dollars more effectively,” said John Engle, an investor and analyst who has studied Tesla.

In Cuomo’s original conception of the South Buffalo factory, two companies — Silevo and Soraa — would share the space and kickstart a new clean energy sector. Silevo was to manufacture high-efficiency solar cells and Soraa was to produce LED lights. The plan was supposed to net Buffalo 850 jobs for a $225 million state investment.

But plans changed. And the state’s investment skyrocketed.

Between 2014 and 2015, Soraa pulled out of Buffalo, and SolarCity, the solar panel sales and installation company, bought Silevo. Cuomo, at the time, celebrated the pivot as a “landmark investment and economic game-changer.”

The state’s investment, meanwhile, shot up to $750 million in exchange for more jobs, a total of at least 1,460. In theory, SolarCity’s acquisition made sense: Silevo would manufacture solar panels that SolarCity would then sell and install.

That’s not what happened.

The losses prompted Elon Musk, its chairman, to push for Tesla, which he also headed, to purchase SolarCity, which was managed by his cousins,  Lyndon and Peter Rive. At the time of the merger, SolarCity was $3.4 billion in debt.

That purchase went through in late 2016, despite misgivings by some Tesla board members, court records show. To win them over, Musk unveiled plans for a revolutionary product, a roof composed entirely of solar panels. The sleek, black-tiled Solar Roof would be built at the Buffalo factory instead of more traditional solar panels.

“Latest feedback from major investors is very negative on SolarCity,” Musk wrote to Peter Rive in September 2016, prior to the acquisition, according to emails released as part of the lawsuit aggrieved shareholders filed against Musk in 2017. “We need to show them what the integrated product looks like. They just don’t get it. Needs to happen before the vote.”

A month later, Musk debuted the Solar Roof, saying its tiles would “look better than a normal roof, generate electricity, last longer, have better insulation and have an installed cost that is less than a normal roof plus the cost of electricity. Why would you buy anything else?”

Lawsuit documents also show that Tesla explored abandoning Buffalo altogether as it contemplated buying SolarCity. Evercore, a financial advisory firm, prepared a due-diligence report for Tesla that explored, in part, paying up to $290 million in penalties to New York in exchange for pulling SolarCity out of Western New York.

But, in addition to the cost of the penalty, the report concluded that reneging on the deal would have too many political costs, as Tesla was attempting to expand its electric car business in the state.

“Any action by SolarCity related to this project that is viewed negatively by the local policymakers could negatively impact policies for the combined entity,” the report concluded.

Page 1 of Evercore analysis for Tesla

So, Tesla settled on using the Buffalo factory to produce its new Solar Roof product. After further research and development, Tesla began production in August 2017. It was done in partnership with Panasonic, which produced the solar cells used in the Solar Roof, in addition to standard solar panels.

Production lagged and in February 2019, Tesla laid off 50 of its 400 employees. (Panasonic employed another 400.) Emails from that time show Empire State Development spokeswoman Pamm Lent coaching Tesla to do “proactive press” to show the plant was “still essentially in r and d mode which will have down time associated with it.”

“It was a bad design all around,” he said of the initial version of the Solar Roof. “It was a poor product design, and then the manufacturing design was not sufficient to bring it to scale.”

The Solar Roof was beset by additional problems: Panasonic’s solar panels didn’t mesh with the Solar Roof design, and Tesla officials didn’t like the color.

“I think the appearance was a big sticking point,” Ethan Richenberg, a former Panasonic employee, told Investigative Post. “They wanted these roof tiles to look uniformly black, like you have a black roof on your house. And I think the Panasonic cells, if you look at them, they’re kind of a semi-iridescent, blue-ish, green-ish color.”

Tesla’s unwillingness to buy solar components from Panasonic contributed to the company pulling out of the Buffalo plant in 2020. That March, Panasonic informed the U.S. Department of Labor it was leaving because “the demand for Panasonic’s solar cells has decreased due to Tesla and other companies importing solar cells from China.”

Panasonic’s 400 jobs were shipped off to Malaysia. In the process, the United States lost one of its only manufacturers of solar cells.

Tesla buying from Panasonic “would have made it more worthwhile for them to stay,” said Richenberg.

Stout confirmed that Tesla struggled to use Panasonic’s solar cells.

“Eventually Tesla just stopped using the solar cells that were being made in their own building because they couldn’t figure it out,” he said.

Instead, Tesla opted to buy imported solar cells from China and began production of its third version of its Solar Roof in October 2019.

The goal was to produce 1,000 Solar Roofs per week, Stout said. Initial production was half or less, he said. By early 2020, production and staffing had picked up, only to have COVID-19 force a shutdown of the entire plant from March to May 2020.

Production of the Solar Roof  resumed until December 2021, Stout said, before Tesla shut it down completely. The reason: The U.S. government, as reported by Reuters and The Washington Post, had banned the importation of solar components from China amid concerns they were produced with the help of slave labor.

In its February 2022 report, Tesla reported to New York that those import restrictions “necessitated the temporary shutdown of solar roof production at Gigafactory New York.”

A current Tesla employee said the company was able to resume imports and restart Solar Roof production by August, but at a limited capacity.

“It’s happening, but it’s not happening at scale,” the employee said.

The shift in Buffalo to work related to electric cars reflects a trend in Tesla’s solar business.

In June 2018, CNBC reported that the company was “sharply downsizing” its residential solar business. Layoffs came to Buffalo in early 2019.

Then, in June of this year, Electrek, a publication that follows the electric vehicle industry, reported that Tesla was halting future Solar Roof installations. The publication reported in November that Tesla was scaling back its solar business across the board.

Tesla’s lagging solar business caused it to bring to Buffalo hundreds of employees working on its self-driving vehicle software. That software has been implicated in 10 fatal vehicle crashes.

Aaron Greenspan, a longtime Silicon Valley figure and founder of the transparency website Plainsite, said the company’s failure to produce the Solar Roof  has left customers angry and the public in the dark.

Engle, the investor and analyst who has studied Tesla, said, “Buffalo definitely got sold a bill of goods.”

He added: “Eventually there will be a reckoning. But it may take a while.”