Buffalo’s firefighting fleet is a mess

Mayor Byron Brown and the Common Council have failed to invest in new vehicles as they've aged out. The result is a ramshackle fleet. Some trucks can't even pump water or generate fire-fighting foam.
By Geoff Kelly

Firefighters who spoke to Investigative Post described arriving at an East Side house fire earlier this month, only to find the lead truck couldn’t pump water. Several told stories about trucks breaking down on the way to a call.

Last month’s blizzard has trained a spotlight on the deplorable condition of the Buffalo’s firefighting fleet.

What’s illuminated is not pretty.

Last week, the president of the city’s firefighters union told the Buffalo Common Council two of the department’s pumper trucks “failed to operate at working fires.”

It shouldn’t have taken the blizzard to draw city officials’ attention to the problem, according to Vincent Ventresca, president of the Buffalo Professional Firefighters Association Local 228.

“If the public knew the real condition of our gear and our working conditions, they would be appalled — and they would be terrified,” Ventresca wrote in an open letter two weeks ago.

The department’s fleet of pumpers, ladder trucks and other emergency response vehicles have been creeping toward the junkyard for over a decade, firefighters told Investigative Post.

The cause: insufficient and sporadic investment in the fleet, coupled with a lack of long-range planning by city officials, including the fire commissioner, mayor and Common Council.

“[The storm] shined a glaring — and long overdue — light on the shortcomings of the Buffalo Fire Department’s infrastructure,” Ventresca wrote.

“We have lived in barely habitable firehouses … we have responded to emergency after emergency in rigs that are barely street-worthy … and we have made do with equipment that is outdated and obsolete.”

In the wake of the storm, elected officials are scrambling to identify the department’s needs and find money for new equipment.

Meanwhile, the issue has brought to the fore a long-simmering battle between the firefighters union and Fire Commissioner William Renaldo, who repeatedly assured Council members last week that the department’s fleet was functional and well maintained.

“At no time did the age or condition of our apparatus or equipment affect our ability to respond or operate” during the many incidents to which firefighters were called during the storm, Renaldo told the Council.

“I wish what the commissioner is telling you was true,” Ventresca told the Council in response.

The National Fire Protection Association recommends pumper trucks — the core of the city’s firefighting fleet — be replaced after 15 years of service.

Thirteen of the city’s 19 pumpers are over 10 years old, according to a manifest provided by the firefighters union to Investigative Post and Common Council members.

According to the fire union, most of the pumper trucks older than 2016 models have trouble producing firefighting foam, which is used for difficult fires involving accelerants like gasoline.

The pumper trucks assigned to Engine Companies 2, 32 and 33 have problems with the heating system, causing windows frost over in cold weather. This problem made the blizzard impossible to navigate for Engine Company 2, as noted by a Twitter user who tracked firefighters’ rescue efforts during the storm:

Engine 2 reports they have no heat in the rig and will be going to the shop after dropping the patient of.

The useful life for ladder trucks — the ones used to reach the upper stories of a structure and to attack a fire from above — is also 15 years, according to National Fire Protection Association guidelines.

Two of the city’s nine ladder trucks are older than that, and four are nearing that age.

A couple of the city’s ladder trucks were damaged in the storm, according to the fire union. One doesn’t have a working pump. The other has a mechanical problem with the ladder: It was stuck in the air for five days during the blizzard, according to Ventresca, and it’s uncertain whether it might get stuck when it’s deployed again.

Ladder Company 15’s rig is a 13-year-old Spartan Crimson with a 100-foot, rear-mounted ladder. It has long been jury-rigged with a desk chair for a rear passenger seat, as seen in this photograph: 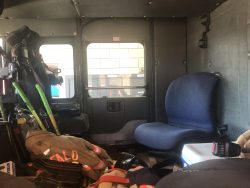 That blue desk chair is a recent upgrade. The previous desk chair wore out: 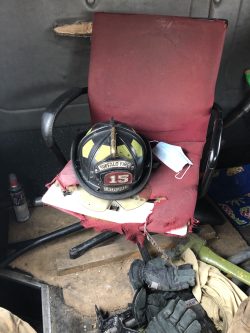 Ladder Company 15 just got a new truck with manufacturer-installed seating. The truck with the desk chair is now a reserve vehicle, used for training and pressed into service only when another vehicle breaks down.

(“I kinda miss her,” said one of the half-dozen current and former firefighters who spoke to Investigative Post for this story, all of them anonymously because they were not authorized to talk to the press and feared retribution for doing so.)

The department has another 13-year-old Spartan Crimson in the fleet, a pumper crewed by Engine Company 25. It suffered mechanical problems during the blizzard:

25 is stuck and the rig wont go into gear, B-46 was sent to rescue them and he got stuck on the way.

There’s no replacement on order for Engine 25.

Fire trucks break down all the time. Minor issues, like a broken seat, are often handled by firefighters themselves. City-employed mechanics perform basic maintenance, like replenishing fluids. Significant problems — like a cracked frame, drivetrain or suspension issues, or a malfunctioning pump — require the department to send the sophisticated, custom-built machines to a dealership for service.

The older a vehicle is, the more it costs to keep running at an acceptable level of performance — which is pretty high for a fire truck.

“These are vehicles that are running constantly,” Ventresca said. “They’re going on thousands and thousands of calls.”

In the past three years, the city has paid three fire truck dealerships at least $638,000 for repair work, according to city financial records. That’s enough to buy a new pumper truck.

Firefighters have had to make do largely because the Brown administration and the Common Council have failed to consistently budget money for replacement vehicles.

The city typically borrows the money to buy fire trucks, as they are considered a legitimate capital expense because their useful lives exceed five years.

Over the past dozen years, the city has borrowed about $8.5 million to purchase new vehicles for the fire department, according to the city comptroller’s annual reviews of the city’s capital budgets.

In that period, the department has added:

According to the comptroller’s reports, there’s little consistency to the amount the city borrows annually to update the firefighting fleet:

In four of the last 12 years, the city committed zero capital borrowing to the firefighting fleet.

In 2018, Brown appointed Renaldo as fire commissioner. Since then, the city has borrowed $1 million each year for fire trucks, give or take, with the exception of 2022, which was another zero.

The average amount borrowed over that period is about $710,000 per year. That’s about a quarter of what the city should be committing, according to the fire union president.

A custom-built fire truck can take two years or more from order to delivery. A ladder truck costs $1.5 million or more. The last pumper trucks the city bought, three years ago, cost $575,000 each, but current prices are higher.

If the city wanted to maintain the fleet according to National Fire Protection Association guidelines, Ventresca told the Council, it would commit to purchasing two new pumpers and a new ladder truck each year, at a combined cost of about $2.5 million to $3 million.

On top of that, he said the city should immediately order seven new vehicles — five pumpers and two ladders — to replace the oldest trucks in the fleet. That could cost up to $8 million.

Renaldo, the fire commissioner, refused an interview request for this story. However, he emailed a brief statement to Investigative Post, very little of which had to do with the state of the fleet or the department’s budgeting.

“The Buffalo Fire Department ,along with most like size departments, is consistently, and continuously upgrading and replacing apparatus and equipment,” he wrote.

He added that since he took the job in 2018 the city has spent $9 million “on new apparatus, new equipment and renovations to fire facilities.”

Less than half of the $9 million Renaldo referenced was for vehicles. Of that, $279,000 was for the four Alternative Response Vehicles, or ARVs.

The ARVs are a sore point for several firefighters who spoke to Investigative Post. Renaldo told the Council the ARVs proved useful during the storm, which Ventresca did not dispute. But the fire union president said the dire need is for pumpers and ladders, which are used to put out fires.

The only firefighting vehicle the department has ordered since Renaldo became commissioner is Ladder 15’s new aerial rig. That vehicle was not custom-built to the fire department’s specifications. It was a dealer’s floor model.

Ventresca said the department’s fleet has suffered from “years of neglect” and accused Renaldo of “completely ignoring the condition of the apparatus.”

“As the commissioner, coming in, he should have done a full fleet inspection. That was never done,” Ventresca said.

Call for assessments and investment

The week after the blizzard struck, South District Council Member Christopher Scanlon called on the city's fire, police, and public works commissioners to provide the Council with detailed descriptions of their fleets and other equipment, including their age and condition.

Scanlon — who did not respond to requests for an interview — has asked the Brown administration to earmark some of the city’s $330 million in federal COVID relief money to upgrade those fleets and other equipment. He has asked his fellow Council members to block the release of that money for other programs until the mayor agrees to that.

Scanlon has also asked the city’s law and finance departments whether it is too late to re-open the city’s most-recent capital budget, which the Council adopted the week before the blizzard. He displayed little patience last week with Renaldo’s defense of the fleet’s condition before and after the blizzard.

“There were issues related to the storm, but in general I’m talking about everyday ability to respond to the calls your department receives.”

Fillmore District Council Member Mitch Nowakowski has called for an inquiry into the city’s preparedness for the storm and the performance of its various departments.

Though his inquiry was prompted by the blizzard, Nowakowski said he hopes it will result in more thoughtful and consistent investment in city services, including the fire department.

Indeed, it's not just the fire department's vehicles that need attention and investment. Investigative Post has previously reported on the city's ramshackle fleet of police patrol cars. Some progress has been made on that front, but the police union continues to lobby the Council and the Brown administration for more money to buy vehicles.

Ventresca, the fire union president, noted that hardly any of the city’s $330 million in federal American Rescue Plan funding — “a little over one-tenth of one percent,” he said — has been spent on the fire department.

Buffalo’s ARP spending plan includes $530,ooo for new breathing apparatus for firefighters, but nothing for vehicles.

The U.S. Treasury’s ARP guidelines permit the money to be used for emergency preparedness. Niagara Falls is just one of more than two dozen municipalities in New York State using ARP money to buy equipment for its fire department and cars for its police.

In the last month, the pumps on firefighting vehicles have failed three times at working fires, Ventresca said. Ladder 6’s reserve rig couldn’t pump water onto a house fire on the city’s East Side. Engines 31 and 34 also experienced pump failures at fires in the two days before last week’s Council hearing.

Ventresca said firefighters have “backup plans” in the event of such failures.

“But there are critical failures happening all the time at major incidents,” he said.