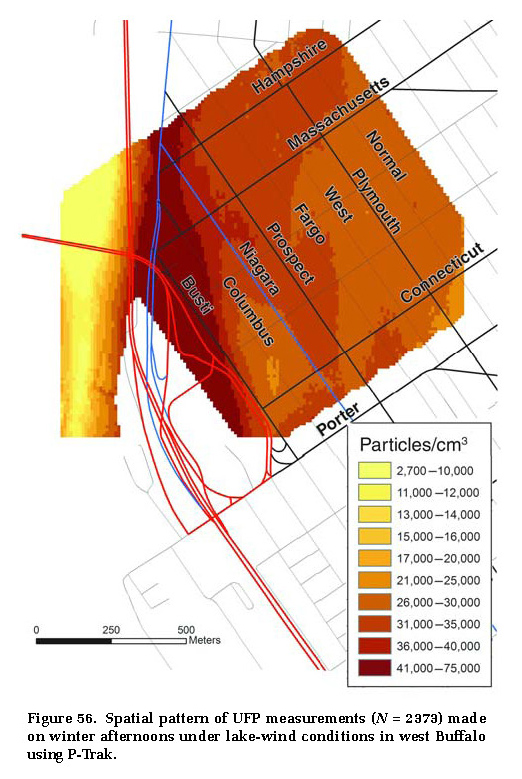 The map shows high levels of ultrafine particulates in the west side near the Peace Bridge completed by Harvard researchers who did the Health Effects Institute Study at the bridge in 2005 and 2006.

Al Carlacci, the regional air pollutant control engineer for the state Department of Environmental Conservation, said he doesn’t need a meter or an air quality monitor to tell him that there’s some dirty air in the West Side near the Peace Bridge, where studies have shown high levels of asthma.

“The more cars you have the more ultrafine particles you have,” he said during a presentation Wednesday night at the Niagara Street Library hosted by the Clean Air Coalition of Western New York. “The problem is what’s enough?

“Any health person would tell you, and I am the same way, if it is bad for you, why would I want any of it? Zero is the answer.

“But to develop a standard, it’s going to take some time. We’re not there yet with a standard. The number is high by a Thruway, guaranteed. By a bridge, absolutely. You can’t argue with it. You can measure it, but we have nothing to compare it to.”

Some local scientists believe the DEC should be testing for ultrafine particles anyway and that it is trying to skirt the issue.

William L. Scheider, research assistant professor for the Department of Social and Preventive Medicine for University at Buffalo, said the day following this meeting that he will be going out to the West Side to test for ultrafine particles.

“In general, I am disturbed that such a complex situation gets distilled into generalities that have the effect of shoving the situation under the rug,” Scheider wrote in an email.

But if you think it’s bad on the West Side, go to the Bronx, Carlacci said.

“If you look at the data from the Bronx, it blows this away,” he said.

Carlacci said ultrafine particles definitely impact health. But the six-month air monitoring program the DEC started in September at two locations by the Peace Bridge plaza is not measuring for these weightless particles the size of bacteria and viruses that enter the blood stream, whereas the larger particles lodge into lung tissue.

“If the Bronx is so bad, they should be organizing there, too,” Scheider said in an email Thursday. “Our concern is the potential for an increase in Peace Bridge traffic, including trucks, and how that will impact an already bad situation on the Lower West Side and ultrafine particulates are the 800 pound gorilla in the room.”

So even though these particles are dangerous to health — potentially more so than the particles the DEC is currently measuring in the Peace Bridge program — the DEC isn’t going to test for them because it doesn’t have a regulation or standard to go by and there isn’t a federally certified device that measures these particles with consistency. And if you look at the history of  creating new regulations for air quality, it will be many years — potentially decades — before an ultrafine particle standard is developed. In 1971, the federal standard for air quality testing was called PM 10, Carlacci said.

It wasn’t until 2006 when the EPA created standards for smaller particles, called PM 2.5. That’s a long, long time. You can view Carlacci’s powerpoint presentation here.

Carlacci said Thursday that the EPA is getting ready to certify a teledyne model for ultrafine particle testing.  By January 2014, he said, the DEC will be required to place one ultrafine particle monitor in Buffalo, and it will likely be somewhere near the I-290 in the suburbs with its 130,000 daily vehicle trips — not the Peace Bridge.

Carlacci’s comments weren’t comforting to any of the approximately 15 people in the library basement who are concerned about the health impacts of the Peace Bridge plaza expansion and constructing a duty free store closer to their homes on the Episcopal Church home property on Busti Avenue. The Public Bridge Authority has not publicly released any plans about its plaza expansion into the neighborhood.

“It’s not that much,” Carlacci said.

Natasha Soto, a community organizer for Clean Air Coalition, said it is frustrating that there aren’t any federal standards for ultra fine particles, but it shouldn’t prevent the DEC from testing for them.

“Just because there isn’t a standard doesn’t mean that we shouldn’t see what people are exposed to,” she said. “Ultrafine particulates are significant and they do affect us.”