What is this stuff in Union Ship Canal?

Don’t think contaminants from past industrial uses are actually leaching into local waterways?

As we reported last week about the plan to open a beach for public swimming at Gallagher Beach in the Outer Harbor, there are serious concerns about leaching contaminants entering Lake Erie from nearby toxic Superfund sites. The Bethlehem Steel and Hanna Furnace properties are the two closest to the beach and both still pose a significant health risk.

I visited the beach and nearby properties numerous times during the research for the article. One spot I visited was the Union Ship Canal, next to where Hanna Furnace operated an iron foundry until the early 1980s. A fenced-in 5 acre dump is located 150 to 200 yards from the canal. The levels of arsenic, benzene and phenols in the dump exceed acceptable groundwater standards.

This property, much of which has been turned into a park and a light industrial center, is where I noticed Tom Fuller fishing in the canal. He said he’s caught deformed fish there.

While talking with the fisherman, I could see what appeared to be blue-green algae on the east side of the canal.

As I got closer, I realized it was something else. 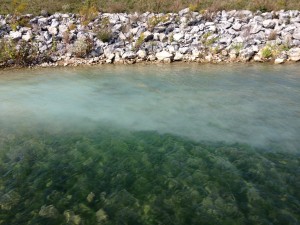 There was a discharge pipe — one of at least four in the canal — releasing what looked like bleach into the water. The rocks were covered in grayish dust and a path of a white-gray contaminant flowed into the canal.

I took photos and returned to my office to call the Department of Environmental Conservation.

DEC employees are prohibited from talking to the press, however. I have to go through the public information office, a process that can take days, if not months, to get a response for simple questions. Simple questions like: What is this stuff?

So I turned to Twitter. I posted the photos and tagged the DEC to find out what this stuff was.

Two days later I got a response from the department: “Looks like calcite precipitate from H2O & old iron/steel slag. Except w/in few feet of discharge points, canal pH is near normal.”

This goes to show that an industry that stopped operations 30 years ago still impacts the local waterways. Some contaminants are invisible to the naked eye.

Makes you wonder what else is leaching into the water.