The Erie County Water Authority is cutting corners in its testing program for lead in the drinking water supplied to most local suburbs.

The authority has historically made little effort to meet a federal mandate to test homes deemed most at risk for lead contamination. In fact, Investigative Post found several examples where the authority tested houses that clearly do not meet the criteria.

“If this monitoring is flawed, if this monitoring it not actually targeting the highest risk homes, then consumers may be receiving erroneous information and false assurances about how safe the water is,” said Yanna Lambrinidou, a Washington, D.C., activist who served on a federal Environmental Protection Agency advisory panel that reviewed the federal regulation that deals with lead in drinking water.

Furthermore, the authority is much more likely to test for lead in the houses of its 235 employees than its 550,000 customers. Up to one-third of the 63 homes that the authority sampled in 2013 belonged to current and former employees.

Such a practice is “frowned upon because it’s hard to believe that the homes of the water utility people are the worst-case homes,” said Marc Edwards, a civil engineering professor at Virginia Tech University who played a critical role in uncovering the drinking water crises in Flint, Mi., last year.

Investigative Post’s findings do not mean that the tap water customers drink in Erie County is contaminated with unsafe amounts of lead. But they do raise questions about the accuracy of the program and the water authority’s assertion that lead is not leaching from the aging infrastructure that delivers water to homes and businesses in suburbs across Erie County.

Water authority officials refused interview requests for this story and would only respond to questions by email from their public relations firm.

“Because it is quite difficult to find customers willing to participate in water tests, it’s standard practice for water agencies to sample employees’ homes if they fit testing requirements,” the water authority said in an emailed statement.

But Lambrinidou said it’s clear that some of the homes sampled did not meet the testing requirements. By testing homes that were not at risk, the water authority was allowed to “game the system on the backs of innocent people.”

“It is disturbing to see water utilities set up unsuspecting consumers to trust their assurances that the water is safe in terms of lead and then turn around and blame these very consumers for being unwilling to participate in the monitoring program,” she said.

The Erie County Water Authority provides drinking water to houses and businesses in 35 municipalities throughout Western New York. Customers include most of the suburbs surrounding the City of Buffalo, including Amherst, Clarence, Cheektowaga, Lancaster, West Seneca, Hamburg and Orchard Park. 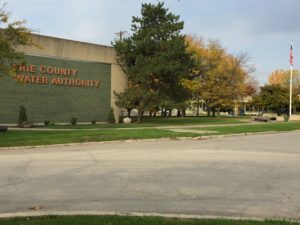 The authority, controlled by appointees promoted by the local Democratic and Republican parties and approved by the Erie County Legislature, has long been the source of criticism for what some consider its patronage-driven personnel practices. Most recently, the authority came under fire this summer for its handling of a series of water main breaks.

The federal Environmental Protect Agency in 1991 issued the regulation that requires water system operators to periodically test for lead in the tap water of homes. Exposure to lead poses serious health risks to the brains and nervous systems of children.

The federal law requires that all homes sampled must have either a lead service line that brings water from the main under the street to the home or interior plumbing with lead-based solder used to seal pipes.

The EPA, however, has done little to compel water system operators to follow these rules.

“Unfortunately the EPA has been turning a blind eye too frequently,” said Edwards, the Virginia Tech professor

Investigative Post first reviewed the City of Buffalo’s tap water sampling program. The analysis, published in August, found that the testing program used by Buffalo did not target the minority neighborhoods where the lead poisoning problem is concentrated. Instead, the city focused its testing in predominantly white neighborhoods in North and South Buffalo that report few, if any, lead poisoning cases. In addition, up to a quarter of the homes the city sampled in 2014 belonged to current or former employees.

Two months after the report, Mayor Byron Brown introduced a series of initiatives to beef up testing in inner-city neighborhoods and impose a more stringent standard for lead in drinking water.

The water authority is required by the federal regulation to collect samples every three years.

Investigative Post looked at the four most-recent rounds, from 2004 to 2013. During that time period, the authority collected 338 samples, an average of 84 homes per round.

The water authority, however, does not have a firm grasp on the locations of all the lead service lines in the suburbs that it serves.

“We do not know this answer,” the authority said in an emailed statement.

Dolores Funke, Erie County Health Department’s director of environmental health, prodded water authority officials by email in December to explain how they were verifying the most at-risk homes. 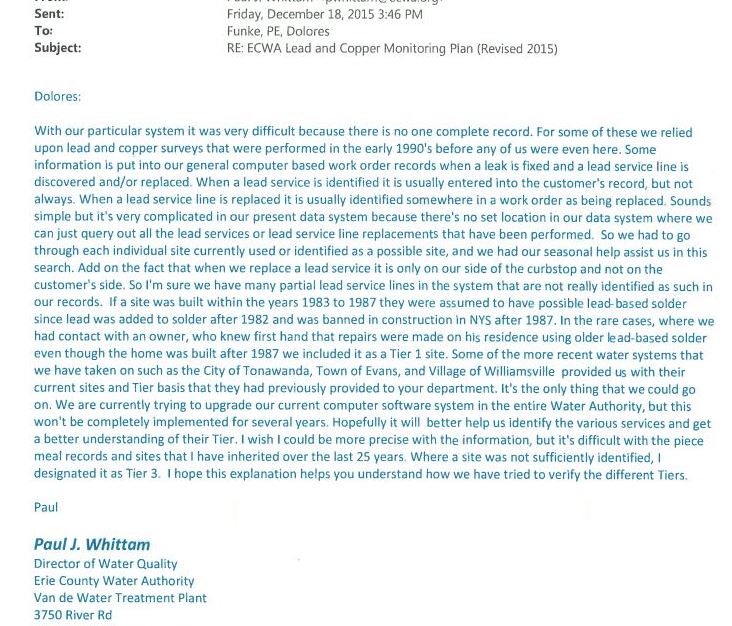 The authority’s director of water quality, Paul Whittam, responded on December 18 by saying it’s been a “very difficult” process “with the piece meal records and sites that I have inherited over the last 25 years.” In some cases he relied on surveys that are a quarter-century old because “there is no one complete record”.

Lambrinidou, the Washington. D.C. expert, said Whittam’s email shows the water authority is unable to guarantee that it is sampling the most at-risk homes.

“The utility does not seem to know where these homes are 20 plus years after the regulation was enacted, and this is highly worrisome and alarming,” she said.

Investigative Post found that the water authority sampled homes of current and former employees in all four rounds. Some of the homes are owned by plant operators, a senior chemist, a crew chief and a construction inspector.

Edwards, the Virginia Tech professor, said that while it’s not illegal to sample homes of current and former employees, it does pose a conflict of interest and raises questions about the veracity of the water authority’s program.

“The whole rule’s effectiveness is contingent on sampling the worst houses,” he said.

This map shows each home sampled by the Erie County Water Authority in every round since 2004. Scroll down using the right sidebar to select by year to see each home and test result or select by a range of test results. Mobile users: phone or device should be in a horizontal position to use interactive map.

At least two of those homes sampled by the water authority never should have been included in the program because they failed to meet the law’s definition of an at-risk home.

For example, the water authority sampled the West Seneca home of its former executive engineer in each of the rounds reviewed by Investigative Post. The home was built in 1994 and does not have a lead service line or plumbing with lead solder.

Another example is a plant operator’s Lake View home built in 1988 with no lead service line or lead solder in the plumbing. Nonetheless, the water authority still sampled the home in 2007, 2010 and 2013.

“If one of those homes does not meet the highest risk criteria then in my estimation, in my interpretation of the law, it’s an outright violation of the regulation,” Lambrinidou said.

The water authority acknowledged the problem.

“A few sites were identified as inappropriate targets and they were dropped from the testing program,” the water authority said in an emailed statement.

“None of these sites were tested in the September 2016 round of sampling.”

Jann sent customers a letter in January that said the crisis in Flint “could never happen here” because the water authority uses an anti-corrosion chemical that coats the inside of pipes and “seals off potential hazards.” As a result, “leaching is eliminated,” wrote Jann, a former pharmaceutical representative with no formal training in engineering or water plant operations.

Experts said Jann’s letter falsely reassures customers that the potential for lead to leach into tap water is not real.

“No one who’s an expert on this problem nowadays would consider water passing through a lead pipe as being safe under any circumstances,” Edwards said.

“Anybody who is informed about the science of lead in drinking water knows very well that there is no chemical treatment whatsoever that can eliminate and completely prevent lead from leaching into the water from lead-bearing plumbing.”