The New York Power Authority has two of them in Western New York. One provides low-cost hydropower to local industry, but a quarter of the pool of electricity lacks for customers and is sold on the wholesale market.

The profits from the sale of this unallocated power are earmarked for a program that funds business activity and community projects throughout Western New York. But that money hasn’t been in high demand recently, either.

Roughly $4 million sits, unused, in the fund and the board in charge of awarding the money has cancelled four of its last five meetings because of a lack of applications to consider.

Officials from the New York Power Authority told Investigative Post they’re doing their best to find takers for both the cash grants and discounted power.

“We’re open for business and we want people to apply. But we also want to make sure the money and power is having an impact,” said Paul DeMichele, a spokesperson for the authority.

Listen to radio version of story broadcast on WBFO

Ensuring that Western New York receives its fair share of the economic benefits of the Lewiston plant has been a years-long struggle, led by U.S. Rep. Brian Higgins.

“For the people of this community, it’s really about being able to benefit from what’s naturally ours,” said Higgins, a Buffalo Democrat.

If the current setup isn’t working as well as it could, Higgins said, “it should be reworked in state law to better take advantage of this great natural resource that we have.”

A discount for industry

The Niagara Power Project, the fourth-largest hydropower plant in the U.S., began operation in 1961. The plant diverts water from the Niagara River, above Niagara Falls, and returns it into the lower portion of the river. It’s the biggest electricity producer in the state.

Just over a quarter of the power generated at Niagara is earmarked for businesses located within 30 miles of the plant – mostly energy-hungry manufacturers and what remains of the chemical industry in Niagara Falls. More than 100 companies  receive power under long-term contracts with the authority, including major employers like Geico, Moog and General Motors, along with companies lured to the region, in part, by the low-cost power, like Yahoo.

Over the past few years, the power has offered companies less in savings than when energy prices were higher. In 2013, for instance, Niagara hydropower was about $210,000 cheaper, per megawatt, than electricity purchased at market rates. By 2017, the cost savings had shrunk to roughly $60,300 per MW.

Despite the discount on offer, the Power Authority has long had difficulty finding customers for all of the power designated for local industry. The amount of unallocated power has increased in recent years, almost doubling in 2016, when two large customers – Chemours and Globe Metallurgical – shuttered their operations.

“Two big fish left. Replacing them is not an exact science,” said DeMichele, the authority spokesman. 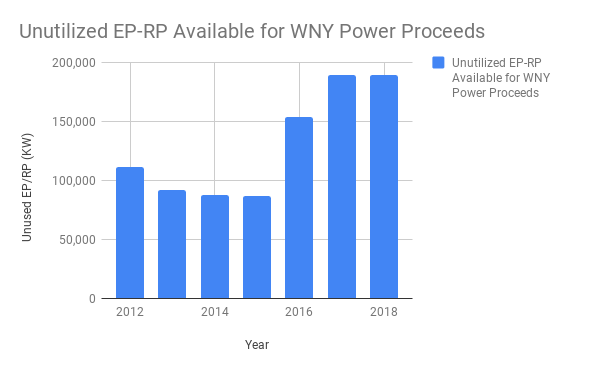 The authority has continued to find takers for smaller allocations, but some other companies have had their allocations reduced after they failed to meet job commitments or other obligations. This year, 27 percent of the power set aside for local industry was unused – mostly power that’s unallocated, as well as power that customers have been awarded but are not yet using.

When NYPA can’t find takers for all the power earmarked for local industry, it sells the excess on the wholesale energy market. The authority used to keep those earnings – something critics said was unfair. If the region can’t use all its allocated power, the argument went, it shouldn’t forfeit the resulting profits, too.

So, since 2010, the earnings from those sales have instead gone into the Western New York Power Proceeds Fund. The sale of unallocated power used to bring millions of dollars a year into the fund, but falling energy prices have sharply reduced those earnings. In 2013, $8.2 million was deposited into the fund. Last year, it was just under $145,000. 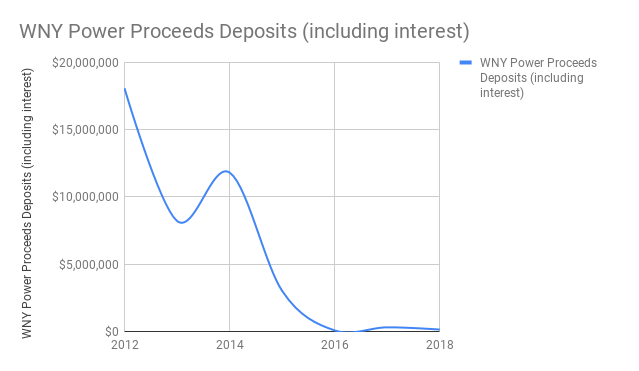 Like customers for discounted hydropower, grant recipients must be located within a 30-mile radius of the Lewiston plant. The criteria for making awards, set in state law, offer support for various kinds of projects: expanding businesses, workforce development and entrepreneurship, infrastructure, agriculture and tourism. At least 15 percent of the grant money given out each year is reserved for projects related to energy efficiency, clean energy, or sustainability.

Applicants must show a “clear economic benefit to the region” in order to win funding.

In the fund’s first year, applications flooded in – more than 50, according to meeting minutes. Many were rejected.

Between May 2013 and May 2014, NYPA records show, 39 applications were “not recommended” for funding. Some – restaurants, shops, medical offices – were ineligible under state law. Others were already receiving state subsidies and didn’t make a convincing case that they needed more. And others – like plans for a waterfront park, and proposed repairs to the walls of Forest Lawn Cemetery – didn’t demonstrate that they would create enough economic impact.

Almost $37 million in grants has been given out so far, to projects including the 43North startup competition ($19.4 million), the penguin exhibit at the Aquarium of Niagara ($1.75 million), and the Explore & More Children’s Museum at Canalside ($1.7 million).

The amount of money the board has awarded in grants has steadily dwindled each year since 2013. The fund still has roughly $4 million left to award and, recently, the pace of applications has slowed to a trickle, meeting minutes show. The board approved nine grant awards in 2015, 10 in 2016, and, last year, just three.

This year, the board approved only one grant and cancelled four out of five scheduled meetings because there weren’t enough applications to consider.

DeMichele said the Power Authority has to ensure that the money given out will have an impact, also pointing out that any change to the criteria used in making grants, or to the fund’s structure, would require a change in state law.

Higgins said that’s something worth considering.

“It should be a never-ending challenge moving forward to get as much of that power back to the Western New York community,” he said.